TERRACROSS CHAMPIONSHIP CLOSES OUT THE SEASON AT POLARIS CAMP RZR 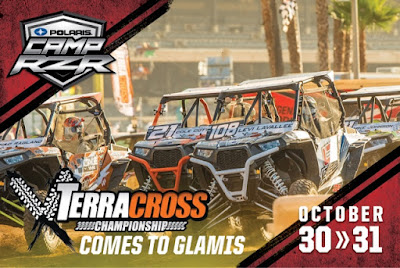 Minneapolis, October 14th, 2015 – Mystik Lubricants TerraCross Championship will close out the season with a Halloween shootout in the dunes at Polaris Camp RZR in Glamis, CA on October 29-31 located at the Glamis Beach Store. The most competitive field of racers ever assembled will descend on Polaris Camp RZR to settle old scores and decide the 2015 TerraCross Championship. For the first time, Saturday NightTerracross is racing under the lights. Musco lighting is coming in to light up the Terracross track for night-time CBS Sports TV racing.  The racing will start immediately on Saturday nightafter the over-the-top giveaway of four Polaris RZR XP ® Turbos to lucky fans.

We couldn’t be more excited to be running our championship at Camp RZR Glamis,” says Terracross Sport Organizer, Jeremy Behrendt. “It will be an incredible points battle and what a perfect event to wrap up the season.”

Jason Luburgh, 2014 Mystik Lubricants Pro RZR Champion and Keystone Automotive racer, remains atop the 2015 TerraCross Championship points race and looks to go pole to pole in another dominating season. Walker Evans Racing RJ Anderson and Mystik Lurbicants’ Mickey Thomas are coiled like rattlesnakes to strike at the top spot, while Cody Rahders and Branden Sims round out the top five in the standings. Powersports superstars including Colten Moore, Jeremy “Twitch” Stenberg riding for Ethica, Mystik Lubricant’s Levi LaVallee, and Monster Energy Drink’s Chris Burandt look to make some noise in the desert and take Luburgh’s title as the TerraCross Champion.

About Terracross
The Terracross Championship features the best of off-road and action sport athletes competing on rough, tough and muddy courses complete with obstacles such as rocks, logs, crossover jumps and tight turns. With events televised on CBS Sports, spec Polaris RZR XP 1000 vehicles, and top athletes from diverse racing backgrounds, Terracross has become one of the premier racing series in the world.

About Polaris
Polaris is a recognized leader in the powersports industry with annual 2014 sales of $4.5 billion.  Polaris designs, engineers, manufactures and markets innovative, high quality off-road vehicles, including all-terrain vehicles (ATVs) and the Polaris RANGER® and RZR®side-by-side vehicles, snowmobiles, motorcycles and on-road electric/hybrid powered vehicles.
Polaris is among the global sales leaders for both snowmobiles and off-road vehicles and has established a presence in the heavyweight cruiser and touring motorcycle market with the Victory® and Indian Motorcycle®and Slingshot® brands.  Additionally, Polaris continues to invest in the global on-road small electric/hybrid powered vehicle industry with Global Electric Motorcars (GEM), Goupil Industrie SA, Aixam Mega S.A.S., and internally developed vehicles. Polaris enhances the riding experience with a complete line of Polaris Engineered Parts, Accessories and Apparel, Klim branded apparel and ORV accessories under the Kolpin®, Cycle Country® and Pro Armor®brands.
Polaris Industries Inc. trades on the New York Stock Exchange under the symbol “PII”, and the Company is included in the S&P Mid-Cap 400 stock price index.
Information about the complete line of Polaris products, apparel and vehicle accessories are available from authorized Polaris dealers or anytime at www.polaris.com. 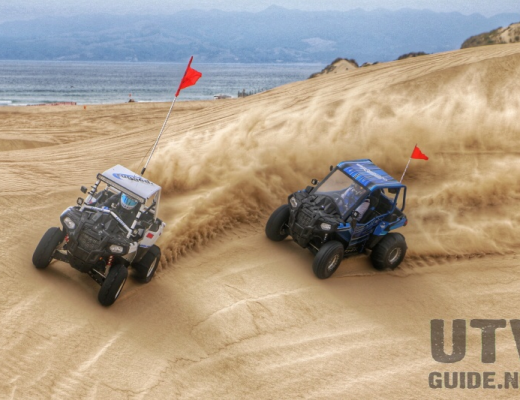 Oceano Dunes is Under Immediate Threat of OHV Restriction

Tight finish at Vegas to Reno. @phil_blurton in ph

@dustinbattleaxejones rolling through pit 12 at ra

Pit 12 with a quick fuel stop for @phil_blurton an

Pit 12 update at Vegas to Reno. Top three are Guth