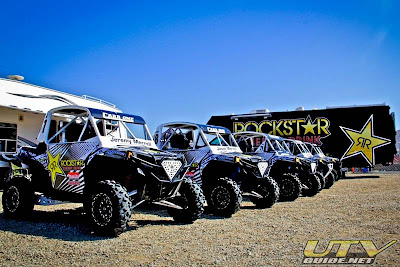 Clint Roberts with Blingstar Products Inc. is the team owner/manager and put this team together to get more involved with the UTV racing scene. It all started after pitching the idea to Polaris Industries, that he wanted to take factory Polaris RZR 900 XP’s right from the dealership floor, make a few mods to the cage, bolt on a few Blingstar products and race these things competitively and show to the public just how awesome these machines were. “I knew that other teams had taken stock Polaris RZR 900 XP’s and raced BITD, WORCS and other series, but never has anyone attempted to race short course stadium type racing with them”. He then called the promoter of Lucas Oil and explained to them that their program for UTV’s could be much larger if they created a new class that allowed UTV’s other than the UTV SR1 class. Lucas Oil was excited about the idea and after further research they created this new class. Now Lucas Oil Regional Series offers this UTV unlimited class and its a blast.

During the process of putting this race team together, BLINGSTAR and ROCKSTAR Energy Drink agreed on doing a licensing deal for UTV products and graphics. “They basically wanted to get involved into the UTV market knowing that its growing rapidly and Blingstar was excited to help make it happen. Since working with ROCKSTAR, we have created the Rockstar/Blingstar/Polaris UTV team and have also designed a Rockstar/Blingstar UTV graphic kit that is now available for sale to the public. It is the exact same design you will see on all of our race team UTV’s, minus the sponsor logos. We will be releasing other Rockstar products built by Blingstar in the near future.”

This last weekend, the team competed in our first race at the Lucas Oil Regional Series June 9th. in Lake Elsinore, Ca. The Rockstar/Blingstar/Polaris team ended up finishing 1st, 2nd and had 4 cars finish in the top 5. We will be competing in all the Lucas Oil Regional races, the final rounds of the WORCS races and Doing some BITD and Baja races. 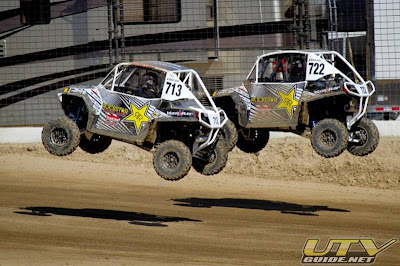 Team Rockstar/Blingstar Graphic Costs: $355.95 and will be available for most UTV models.

You can learn more about the specs and rules at www.lucasoilregional.com