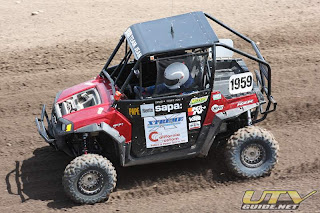 Folsom, CA – April 17, 2011 — VORRA did a great job changing up the track for round #2 at Prairie City OHV.  The track was longer with some tight corners, fast straightaway’s with some jumps that used every bit of our suspension and then some.
This round had four 800 UTV’s and six 1000 UTV’s.  We walked the track prior to tech inspection and decided to change our clutch weights in hopes of getting a little more speed to try and keep up with the 1000 cc UTV’s in the straightaways.  Our 2nd overall qualifying, behind the #418 RZR XP of Keenan Rogerson and just in front of the #1965 Muzzy 999 Teryx of Jon Crowley, proved our adjustments to be the right choice. 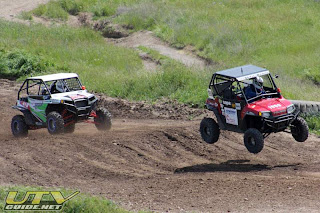 The race schedule for this round would consist of three 6 lap moto’s (due to the length of the track).  Moto #1 had two rows of 5 UTV’s with us starting in the middle of the first row.   Our 790cc Holz powered RZR was the quickest of the line but the #418 RZR XP was able to slide underneath us at the end of the long start line.  The balance of the first Moto we trailed the #418 and finished 1st in the 800’s and 2nd overall.
The #1965 of Jon Crowley and #1910 of Ricky Leard both crashed out in moto #1, both drivers were fine but their UTV’s will need some work.
Moto #2 had us starting in the 2nd row due to our moto #1 finish.  By the third corner we had worked our way to 1st place overall with the #418 hot on our tail.  Unfortunately the #418 was able to pass us in the same spot as the first moto and once again we finished 1st in the 800’s and 2nd overall.
Moto #3 was a repeat of the previous 2 moto’s where our  XMF, Sapa, Pape Rentals RZR chased the #418 the entire race only to once again finish 2nd overall but we did gain a sweep of the under 800cc division.
Next up for the Team Jean RZR is the VORRA Yerington 300 desert race.
Thank you to our sponsors:  XMF (+6 suspension & roll cage), Walker Evans shocks, Sapa Extrusions, Cal Custom Trailers & Power Sports, Pape Rentals, MUZZY Exhaust and Hiper Technology carbon fiber racing wheels. 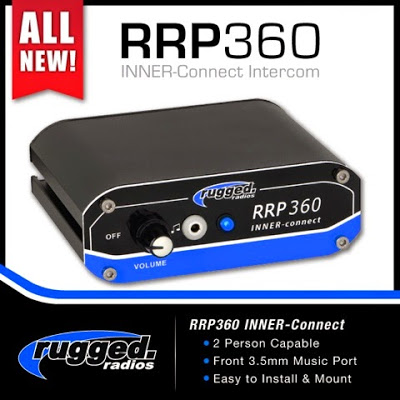 FOX Creates the Next Level in Sport UTV Suspension