Fresh off of a five-race winning streak and the 2015 UTV Unlimited Pro championship, the DragonFire/Rockstar Racing team was looking forward to the start of the 2016 Best In The Desert racing season. Rain before the THR Motorsports Parker 250 on January 8-9, 2016 meant there would be plenty of traction and no dust to worry about in the Arizona desert. Things were off to a great start with a new car and a new season!

During the off-season, the team decided to move to the UTV Production Pro Class in 2016. “We wanted to compete with a bigger field and give someone else a chance to win the Unlimited Class,” said DragonFire Pro athlete Lacrecia Beurrier of her decision not to defend her title. Be careful what you ask for! There were more than 30 Production Pro on the starting line for the Parker 250!

Undaunted, Lacrecia lined the 1924 Polaris RZR up 18th next to a brand new Yamaha YXZ 1000R. Lacrecia pulled two consecutive holeshots over Turbo Mavericks in the last two rounds and she was confident crew chief (and husband) Eric had built an even better car this season. She was right, the Yamaha never had a chance! In fact, nobody seemed to have a chance as the first 30 miles flew by with no one in the review mirror.

Passing a trail of broken cars scattered all over the track, and with no dust to contend with, things were looking good to start off 2016 the way last year ended! With another podium on her mind, Lacrecia drove confidently over the typically rough Arizona desert terrain.

All systems were go until just before the midway pit when the familiar sound of a broken belt was heard. Co-driver Cal Vandervoort, jumped out to do a quick change… or so he thought. A total rat’s nest of cords was tangled up in the clutch. Lacrecia sat heartbroken as one-by-one, 20 cars passed by. Cal was finally able to free the clutch and the team managed to get moving again.

Driving aggressively in an attempt to catch all the cars that had gotten by during the extended belt change, bad luck struck again. Lacrecia lost control and rolled over a soft sandy berm. Luckily the only damage done was to her pride. Friend and fellow racer, Michael Lansky, was kind enough to put his race on hold and give the team a pull back over on their wheels.

Lacrecia put her game face on and charged off to try and salvage as many points as possible from the first race of the season. Tip-toeing through the rock garden and flying through the wash they finally reached the Rockstar Racing pit. After a quick inspection, the pit crew assured the team that no damage was done to the car. After a splash of fuel, they were once again tearing through the whoops and rocks.

The second lap was uneventful until mile 60 when the sickeningly familiar sound of yet another broken belt was heard. Fortunately the belt change went much faster this time and the team sped off to finish 14th out of 33 Pro 1000 cars (and 28th overall).

“You win some… you lose some, that’s racing,” says Lacrecia. “But we plan to put this Polaris RZR on the podium at Laughlin! The team had a great time and, as always, thanks to all of our sponsors that make race day happen. Special thanks to our home own Polaris dealer AZ West, ITP tires for no flat tires, Ryan from Raceline wheels, Alex Reed, Murray Racing and S3 crew for helping us out in the pits!” 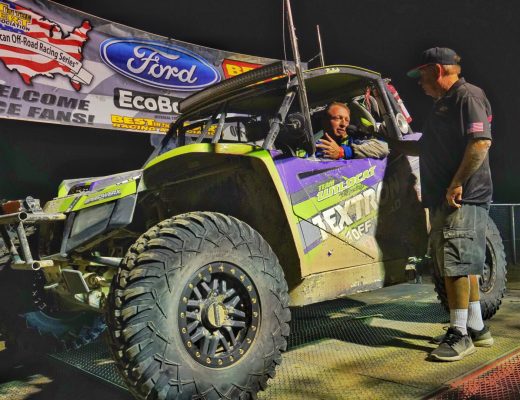 Bulloch Wins Big in Wildcat XX At Vegas to Reno