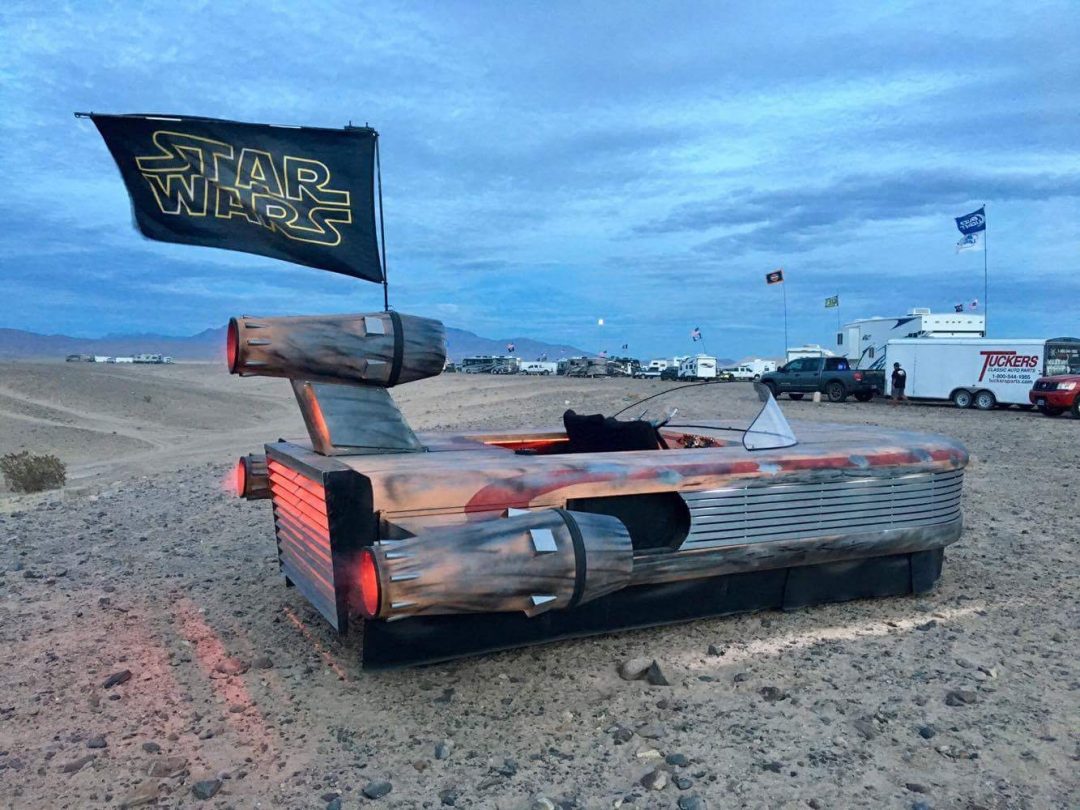 Last year, we got a taste of movie creativity when Trish Ketchell and Laura Rapp (with some heavy lifting provided by their husbands Walter Rapp and Howard Bieber) rolled their Flintstone mobile RZR out into the sand. The build was so spot-on that you would have sworn that Fred and Wilma had just passed you down sand highway! With the success of that build providing a base of inspiration, Walter and Howard set off to outdo themselves this year. Boy, did they hit the nail on the head. When you first see this car, it takes you right back to George Lucas’ view of the future (from the 70’s). The design details are all there, down to the dents in the hood and the paint wearing off of the body from years of sand storms and rock chips. It is absolutely massive- 16.5 feet long and 12.5 feet wide at the rear. It commands a presence, especially with the fog machines and pressurized CO2 system billowing smoke from the three jet engines. If this were entered in the Show ‘N Shine, it would deserve its own class. Walter and Howard got the idea from Trish Ketchell, and built the entire car out of their garage. The Landspeeder started off as a 2015 Polaris RZR XP4 1000, which was stripped to the bare frame and used as a rolling drivetrain for the new vehicle. Lucas’ original land speeder was built on a custom 3-wheel chassis, and couldn’t match the RZR base in terms of performance. Even with this massive body, the Landspeeder is still 4WD, meaning Walter and Howard can cruise this thing through the dunes (as long as they don’t get the nose or tail hung up!).

We spoke to Walter about the build, and here’s what he had to say:

“Last year, after building something that what we thought was pretty cool (and just for fun), it ended up changing how we saw Halloween. The Flintstones car was a huge hit and became the driving force behind doing something bigger and better. This year, it evolved into something much greater than Howard and I imagined.

Disassembly started August 19th with the base of the build being a 2015 XP 1000 4 seater. The car was stripped down; we removed the cage, all rear plastic, doors, rocker panels and anything else that got in the way. The overall majority of this build had taken place over 5 weekends and roughly 165 hours. Total time in the build is just shy of 200 hours! That time doesn’t even include research time online looking for specialty items, LED lights, costumes or even running around town shopping parts or items needed throughout the build.

Not much time was spent “planning”, as it was a mad rush to get started on it. We didn’t have many issues that set us back, and never hit a point where we had to start all over. We knew what we had to do and we did it. The refreshing part was that Howard and I work well together, and we feed off each other’s ideas. We will interrupt each other a million times while elbow deep in god knows what… yet never get upset when our ideas clash. So, this year we decided to build the Land Speeder X-34 from Star Wars IV! It hovered off the ground, had smoke, Jet engines and a complete futuristic cockpit! In all of the research we did, we found MANY different versions of the Land Speeder… I was even able to find original photos of what Lucas Film’s first model. They made fiberglass molds, built it on a 3 wheel, one-off chassis. We didn’t have the time to go that crazy, so we improvised! The stock footprint of the XP1000-4 is roughly 12′ long and 5′ wide. This thing now sits at 16′ 6″ long and 12′ 6″ wide!

Little things that we never even thought of in the beginning became super important to the build. We wanted to build our own fog machine, and came up with LOTS of ideas that just didn’t work at all (or work like we wanted). A quick trip to a Halloween store for a cheapo fog machine gave us a glimmer of hope. After trying to modify the machine (and making it inoperable), Howard decided no more screwing around. $300 later, we had a commercial grade DJ 1300 watt fog machine!

So, now we have another issue… How in the hell are we going to power it?! A 1500W 12v inverter couldn’t even come close to supporting this massive fog machine. Well, another trip to Home Depot for a small and quiet 1800w generator! Have you realized yet that we’ve gone overboard? By the end of September, the majority of the car had been built, but there were a ton of little things that still needed attention. We had to figure out how to plumb fog to 3 jet engines, and we also added a CO2 tank for jet propulsion! It’s now the beginning of October, and time is running out. We have LED lights coming from China, as we ran out of the LED lighting that we already had and had to order more. There is paint on the car, fog flowing from the jets, and CO2 shooting from the back… but sooo much more to do! With the body built the way it was, the seats had to be raised 12″ just so you could see to the end of the car, and for it to look right. Ever move your seat away from the pedals by a foot? We had to raise the floor in the front, as well as extend the gas & brake pedals so we could drive the car safely. Let’s not forget… Luke Skywalker wasn’t driving the Land Speeder x-34 with a Polaris steering wheel!

We had at least 2 full weekends of just metal fabrication and sheet metal work. Like I said earlier, we really didn’t change a lot during the build. When we did, it was for the best, and they were mostly little changes that set the bar above our original expectations. There were so many little details that we wanted to do, and neither one of us had a clue how we were going to pull it off. Between the two of us, we weren’t stumped for long. This build wasn’t anywhere as easy as the Flinstones car! As I type this and look back at the last 2.5 months of work… I still sit in awe that we actually accomplished it, and got it done well ahead of schedule! I still have a hard time believing it came out as well as it did!

Walter and Howard’s hard work payed off big time, as the overall product is definitely 100% unique. We can guarantee you won’t see another RZR like this out in the dunes this season, and that is exactly what drives this team. We can’t wait to see what they cook up next year!