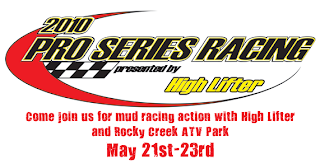 Southern Mud Racing Series is proud to announce Stop #3 of the 2010 series at Rocky Creek ATV Park. SMRS (www.southernmudracing.com) is an ATV mud racing series conducted in the southeast region of the United States. Member racers (along with individual event non-member racers) compete in racing events at several participating venues (ATV parks) in North FL, South GA, and South AL. The series is primarily sponsored by High Lifter Products as a spin-off of High Lifter’s own PSR series in TX, LA, and AR. The series follows PSR rules and will be managed and executed by ATVS GONE WILD.

Come out and watch as semi-professional racers compete for prize money and bragging rights or join in and see how you stack up against the best racers in the southeast. In addition to the points series racing action, there will also be other ATV related events throughout the weekend, including drag racing and a GPS assisted treasure hunt. If racing isn’t your thing, Rocky Creek ATV Park boasts some of the best trail and mud riding in the southeast. Amenities such as onsite food and beverage vendors, showers, and spacious camping areas make for a great weekend with the family.

For more information on the venue visit www.rockycreekatv.com.

STI Draws a Crowd at the Sand Sports Super Show