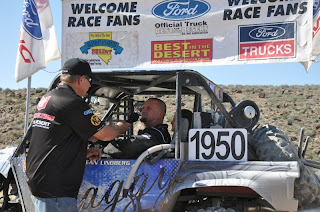 Menifee, CA — April 27, 2010 — Alamo, NV would play host to the Best in the Desert Silver State 300. 199 entries (the most ever for BITD) and every class from 2 wheel motorcycles to 4 wheel Trick Trucks, the action was sure to be intense. Fatography.net was there to cover the class 1900 UTV’s tackle the 300 mile course.

Friday morning around 9:30am we pulled into tech at the Aliante Station casino + hotel. The weather was clear and 70°. We made our way to the media table to register and get our official Best in the Desert media vests. Tech was filling up fast with quads, buggies, trucks and UTVs. The UTVRA officials had set up tech station for the UTVs in the parking lot. The main tech guy and also BITD racer Corry Sappington had not made it to tech yet. I asked around and found out Corry had some motor troubles before the event and he was not going to make the event.

We set up to shoot pictures again at RM165. The 1954 car still had a commanding lead over the field but the 1912 car of RZRs Edge Racing piloted by Joe Conchola had moved into 1st place. Car 1917 and 1937 were battling for 4th place physical and this was allowing car 1912 to open up a gap. By this point in the race the field had spread so far apart that we could only follow the top 4 teams. At RM175 the cars came down a hill and then shot under the road through a small tunnel. Car 1954, 1912, 1917 and 1937 all made it under the bridge crossing without incident. We packed up and headed south to Calinte to try and catch the UTVs crossing a old wodden bridge. The only car to cross the bridge while we were on location was the 1954 car. We packed up and headed for pit 5 were found RZRs Edge looking for a way to get suspension parts to their broken car at RM190ish. We headed south for 40 miles to the finish. By the time we got to the finish, the 1954 car had already crossed the line for the overall win in UTV. Car 1917 crossed the finish 1st in class 1900. Car 1950 finished 2nd in class and 3rd overall. The 1912 was down for 2.5 hours making repairs. RZRS Edge was still able to save a 4th place finish. I asked Mike Cook of RZRS Edge how the race went. “The race started out great. Our HCR suspension and King shocks worked great. Going from 9th off the line to 1st by RM164 was great. But at RM190 we had a bolt failure of the rear suspension. This took us out for almost 2.5 hours. We fixed it and were able to continue on. The Pit Bull Tires held up great “No Flats”. We are very happy with the 4th place finish considering the down time buddy.”

All in all it was a great race. I got to meet many great people. Big thanks to Best in the Dessert for holding a great race and allowing the UTVs to be a part of it.

Check out more pictures from the race at: www.fatography.net

Nic Granlund’s race recap of rounds 1,2,3 of the Quad X championship series and round 1 of The Dirt Series at Glen Helen

BRP to Produce Specialized Motorized Vehicles Based on Commander Platform