Minneapolis, January 22, 2015– Honolulu Hills Park, in Taft, Calif., would kick off the WORCS Racing Season for 2015 and Polaris Factory Racers would be back on the podium.

Polaris Factory Racer RJ Anderson in his new No. 37 Holz/Walker Evans/Polaris RZR XP 1000 would start in the first row, get the holeshot and never look back taking the SxS Pro Class. Second would go to David Haagsma in a RZR and third to Polaris Factory Racer Ryan Piplic in his new Nelson & Nelson RZR XP 1000. Defending WORCS Champion Beau Baron in his new Holz/Maxxis/Polaris RZR XP 1000 would work his way up to second but would need to change a belt during the race which had him finish in sixth. Mitch Guthrie Jr., who was running right behind Anderson for part of the race, would have a mechanical issue in the Pro SxS Class, but also would run the SxS 1000 Stock class and take first.

Honolulu Hills also would be the start of single-seat racing in WORCS and Ronnie Anderson, who took third is SxS Pro Stock with his Walker Evans/Holz RZR XP 1000, would line up his Walker Evans/UTVUnderground/Polaris ACE 570 in the Production 600 class, which allowed both one and two seat vehicles. There would be three ACEs entered and four cars total. Anderson would take third behind another ACE and the winner in a RZR 570.

The next WORCS race is Buffalo Bills, in Primm, Nevada, February 6-8. 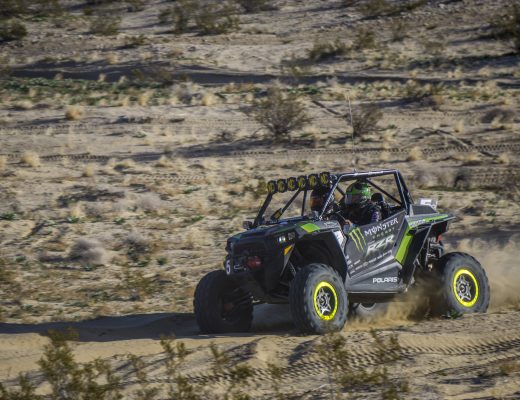 Polaris RZRs Sweep Podium at King of the Hammers