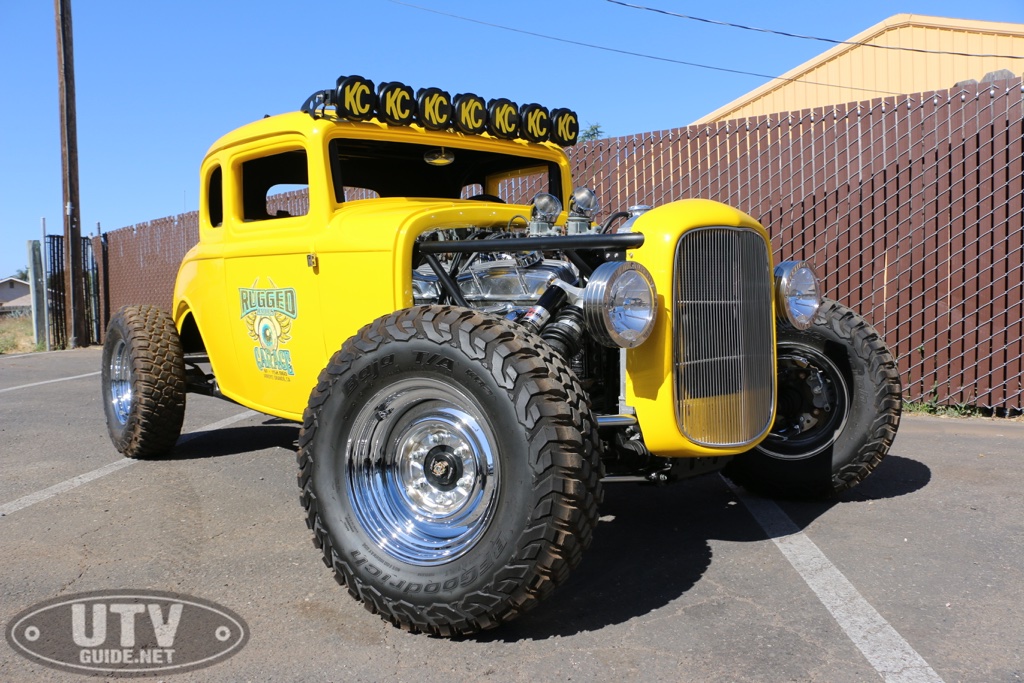 Ford’s early-30s Model B and Model 18 coupes are the most iconic hot rods of all time. The very sought-after Deuce Coupe is still a fixture in American hot rodding today, with an amazing amount of aftermarket support. This makes it possible to buy an entire 1932 replica Ford fiberglass body pre-chopped and have it shipped to your door. However, what would you do with a ’32 Ford fiberglass body?

The short answer is: Slap it on top of a 4 wheel drive, turbocharged, well-suspended offroad chassis like the 2018 RZR XP Turbo. The long answer:

Rugged Radios and NVFab have collaborated on a few projects, and this 1932 Ford Replica Hot Rod is their latest. Their first foray into custom builds was the turbocharged VW Bug built on a Polaris RZR XP1000 Frame. They then created a second build using a Meyers Manx-style beach buggy body on another turbocharged XP platform. Their third? A Willys Jeep replica body on a Polaris General 1000, dubbed the Rugged General. This team is known for their creativity, and this newest venture is the best yet.

Greg Cottrell, the owner of Rugged Radios, has been known to have wild ideas for UTV builds. His passion for the UTV industry manifests itself into some of the craziest builds we have ever seen. Greg trusts his visions with one shop to build these beautiful customs- NVFab, owned by Nick Valentine.

Starting life as a “Polaris Blue” 2018 RZR XP Turbo, this ’32 Ford turned into a giant pile of parts before any progress was made. NVFab cut the RZR down to the inner frame rails and the rear engine cradle, fabricating a custom tube chassis around the small center section to make up the entire car’s frame. Because the RZR now had to accommodate a dummy engine up front (more on that later), the wheelbase was stretched 12 inches to give the car a little breathing room.

The stretch fixes the proportion contrast between the ’32 Ford body and the Stock RZR as well. The front section uses two stylish upper frame tubes to connect the firewall, lower chassis, suspension tower, and radiator mounts. The metalwork was clearly planned out and executed properly, making this car much more than a RZR with a Ford body on it. Inside the car, a full racing-style 6-point roll cage is tucked up high and tight in the bodywork.

The interior features a V-shaped doorbar for added strength, and a perimeter, centerless rollcage to accommodate the massive soft-top sunroof opening supplied by Legacy Products. The doors and dash are painted body color, and there is a MASSIVE amount of sheet metal work to flesh the rest out. In an effort to keep the car light, the doors are the only interior panel that is upholstered or covered in any way. A killer PRP bench seat and 4 point harnesses make room for two occupants. A matching, custom pleated trunk cover and door trim with pockets were installed by Martin at V&M Upholstery. 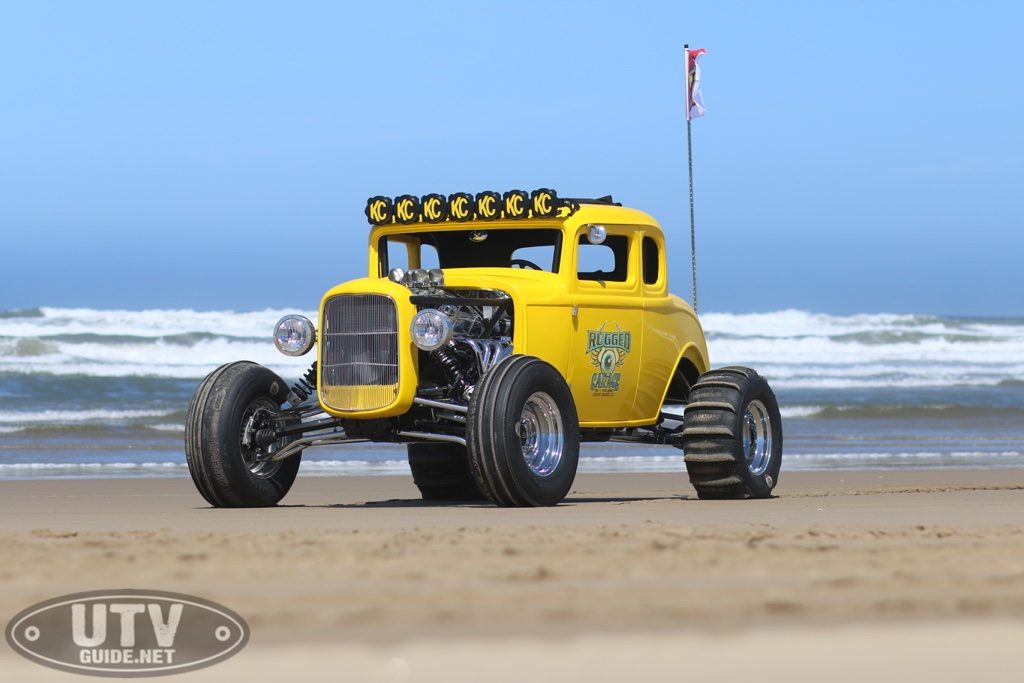 The 350 cubic inch American small block shoehorned into the front half of this Hot Rod is liquid-filled, but not the liquid you would expect. The engine is actually a 7.5 gallon aluminum baffled fuel cell wrapped in a foam mock-up block body. It is complete with valve covers, a very rare Weiand WC4D 4×2 intake manifold, long-tube headers that glow red in the ends, and a Jack Daniel’s bottle for the radiator overflow catch can. The small details in this car are incredible- the aluminum oil pan is the sump for the fuel tank and contains the fuel pickup. The forward carburetor is the fuel filler, complete with a custom billet cap. A Rugged Radios fresh air pump body was used in place of the distributor, and was adapted to accept a cap for faux plug wires. Everywhere you look, this car oozes time, patience, and attention to detail.

The front and rear suspension was replaced by RuffStuff’s tubular steel suspension kit, which is designed by offroad racing champion Shannon Campbell. The arms have been chromed, which is the perfect finish for this car. Custom KC HiLites LED lights were mounted up front to replace the stock headlights, and their insanely bright LED Gravity Pro 6 light bar adorns the top of the cab. Oddly, the light bar doesn’t look out of place at all, and neither do the 31” BFG KR2 tires. 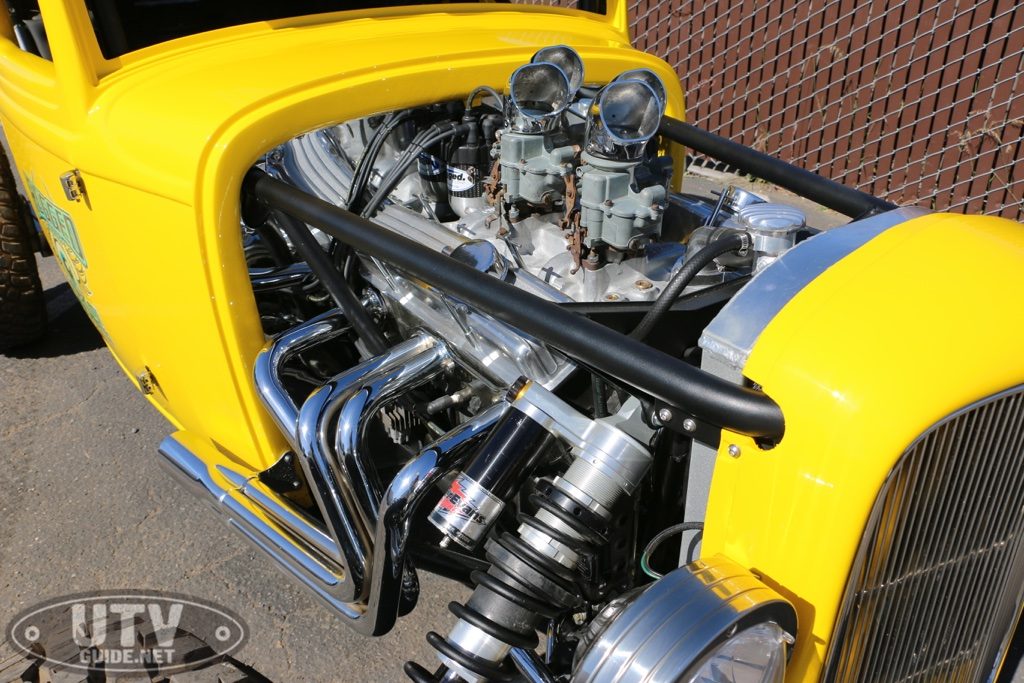 The RZR retains its factory engine, transmission, four wheel drive system, and electronics. Boondocker massaged the engine to somewhere around the 200 horsepower mark, and it exits through a factory muffler that is routed out the bottom of the fiberglass trunk. The RZR’s brakes and steering are also reused, although the mounting and routing have been modified. The stock RZR shifter is reused here, but is topped with a custom chrome piston shift lever. The center console was all hand-fabricated from sheet metal and is adorned with the NVFab logo just above the shift lever.

The trunk opens on custom hinges and is finished with a heat shield to guard the trunk lid from the heat of the exhaust. A Safecraft fire suppression system is employed here as well, because the trunk has been transformed into the engine bay. The factory Polaris air intake is used and is still easily accessible. A small, hoop-type rear bumper houses the license plate and the antenna mounts. This car is equipped with the correct items to be street legal in many states. 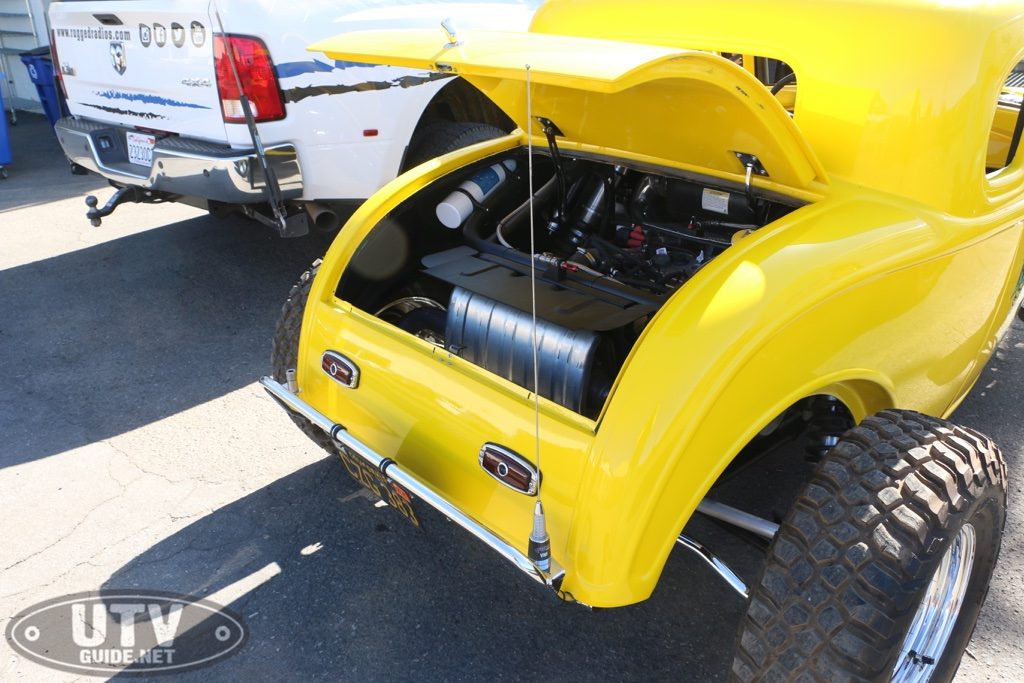 Underneath the fancy fiberglass shell lies a hand-built one-off frame. Nick at NVFab new that the car had to be strong enough to stand up to Greg’s spirited driving, so the chassis was reinforced and engineered to take a beating. The factory three-link rear suspension design that came on the RZR XP Turbo is reused here, but is built with stronger parts. Walker Evans Racing built two sets of custom shocks for this car. The set in these images is their offroad setup, which retains proper ride height to be able to take this car through the dunes at high speed. Rugged also has another lower, stiffer set of shocks that are set up more like a short-course truck. These are used strictly for shenanigans and tomfoolery.

With the length of the car, the fiberglass body, and the fake engine up front, you would think that this RZR has been tasked with carrying more weight than it should. In reality, NVFab was able to keep the weight gain in check, and with careful planning, this ’32 Ford only ended up a few hundred pounds over its original ship weight. When you see video of it running, you will immediately notice that the added heft didn’t do much to phase this car. With the Boondocker engine work, this hot rod can smoke the tires with the best of ‘em. 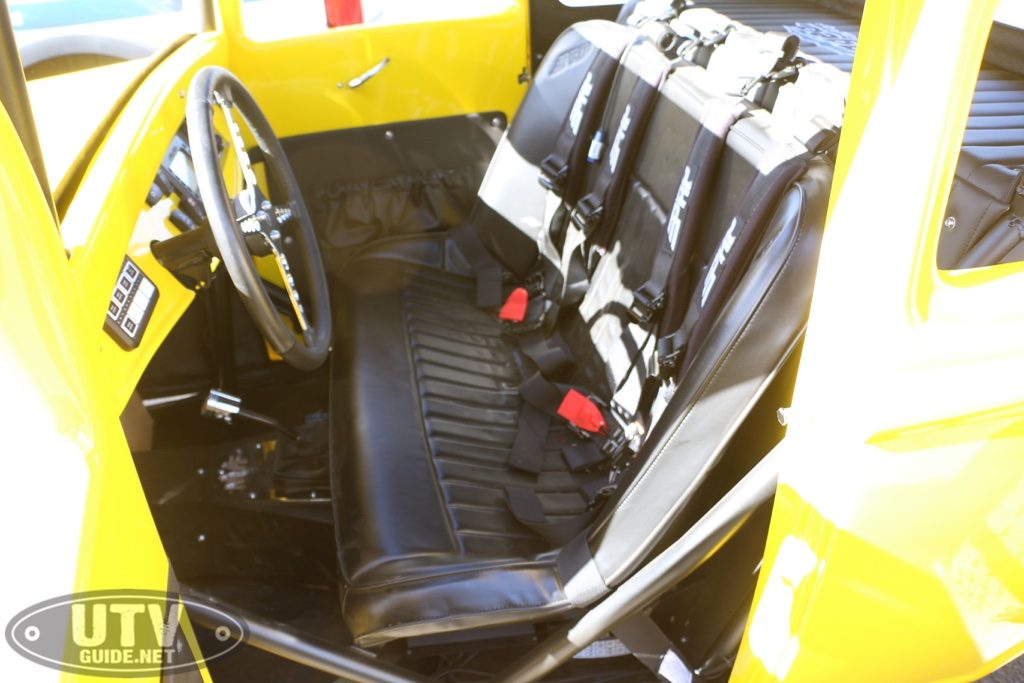 Nick at NVFab couldn’t give us an estimate on how many hours they all have into the project, but he did say if he ever got the nerve to count the time slips, he would let us know. Something this polished and cleanly built clearly takes time and dedication, and Greg & Nick both said they would build another one in a heartbeat.

@ruggedradios has built some incredible UTVs in the last few years, and what we like most is they aren’t afraid to use them! #Rugged32 #oregondunes #utvtakeover #notatrailerqueen

Check back for more content with this gorgeous Hot Rod RZR, as we will be bringing you more photos from the build, videos of it running, and even some special online content!

-Jack Daniels bottle being used as a Radiator overflow reservoir.

-Polaris RZR Chassis is a 12” stretched from NVFab

-Rear trunk opens up to show off the Polaris motor

-KC Lights were also used up front acting as the stock headlights.

-Custom bench seat was made by PRP Seats

-Transmission shift lever is made from a Piston

-Tucked away is a full 6 point roll cage

Electronics:
-Dashboard is equipped with a RRP660 Plus Bluetooth Intercom and waterproof 25 Watt UHF/VHF Radio.

-XTC Turn Signal kit was also installed to make this street legal in some states.

-sPODS was used to keep the wiring clean and under control.

-All of the suspension links have been chrome plated.

-NVFab / Nick Valentine and crew for making this fantasy become a reality. 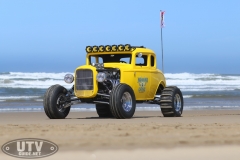 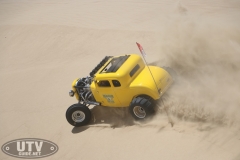 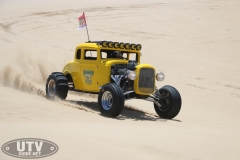 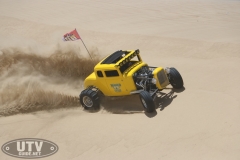 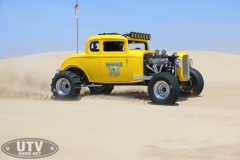 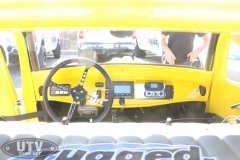 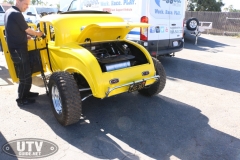 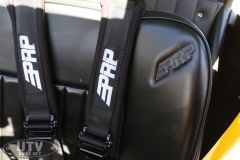 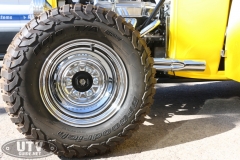 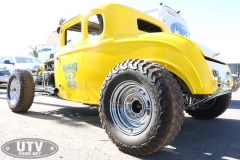 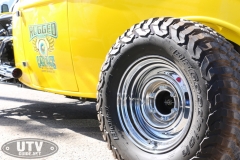 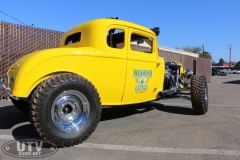 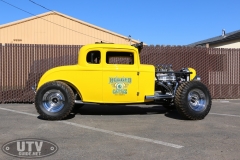 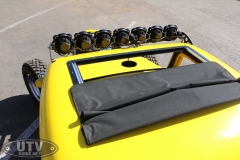 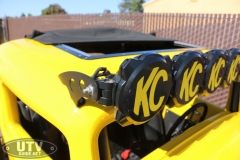 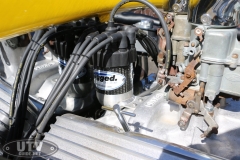 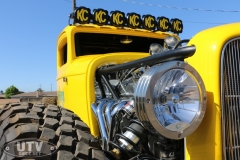 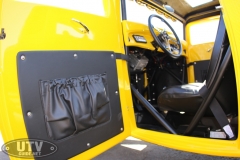 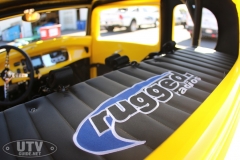 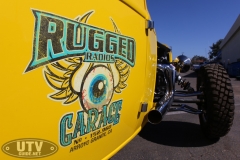