rOtation Motorsports came about from a story. A story of life, death, and perseverance. My name is BC Vaught and I manage athletes. One in particular is Colten Moore. You may have heard of him through Winter X Games.
I toured the world playing drums for 10 years with (hed)p.e. and Breaking Benjamin. But, drumming wasn’t my only passion. I grew up with the family camping in Ocotillo Wells, Glamis, and Dumont Dunes. My father raced NASCAR, NHRA, and build racing engines most of my life. Racing is in my blood.
When I was at a crossroads in my life with music, my good friend Wes Miller from H Bomb Films, maker of the Huevos quad films, asked me to come work with him. I was a “quad guy” too having graduated to my 87 Banshee from, I don’t even want to mention the year, a 200X, 3 wheeler.
So, I took the job with Wes. I pushed his merchandise line only to find out nobody in motorcycle shops wanted to buy quad apparel. But, I noticed the riders Wes was filming had a ton of passion for what they did. It was the beginning of the freestyle world and the quad boys wanted a piece of the action. And I felt I could manage them just as my manager in music (who currently manages the biggest metal bands of today such as Slayer, Mastadon, Bullet For My Valentine, Ghost) did. So I gave it a shot.

At an event in Minnesota, I met a rider who had unmatched talent in regards to quad freestyle. His name was Caleb Moore. I asked him if he wanted to ride a show here and there for me and he obliged. He was from Texas and was a very respectful kid and a pleasure to work with. We worked together for a year or so, then he introduced me to his younger brother, Colten. Caleb said, “This kid has more talent than me. Believe it.” Colten was quiet and shy so it was hard to believe, but through the years, Colten has proved it.
Eventually, we got the boys into Winter X Games on Polaris Snowmobiles through the man that ended up getting us into racing, Joe Duncan. Joe was an old friend that promoted snowmobile, and quad events, eventually starting the Terracross Championship.
The boys had some success at Winter X. They pulled off the worlds first tandem back flip on a snowmobile, the first ever body varial, multiple medals, etc, until, Caleb’s crash in 2013. Colten’s older brother passed away after that crash. Colten, his parents, sponsors, friends, and fans around the world were devastated.
When Caleb passed away, there was a period of time where nobody knew the future. I had owned a restaurant and thought I would focus on that business perhaps. I just wanted to wait and see what Colten wanted to do. I wanted to find Colten a new career. Something with less risk.
I thought of a few things Colten may be interested in, but his passion still remained performing freestyle and traveling the world. So, my search continued.

But then, there was Joe Duncan’s Terracross Championship. In the wake of Caleb’s death, Joe asked us if we’d like to be a part of Terracross, which was a series where everyone races Polaris RZR XP1000’s, all set up equal. He even invited Colten’s father, Wade Moore, to be a part of it as something to keep Wade’s mind busy after Caleb’s death.

In any regard, we’ve competed in Terracross for 2 years now. It has been awesome and with that is where I saw how Colten found a new passion. And, if we started from the ground up in freestyle, persevere through think and thin, we could do it in racing with the right team.
I started talking to a few people, made some phone calls, and really put my mind to work on this team. My company is called rOtation Sports Management, so I simply named our team, rOtation Motorsports.
We’ve had a long history with Polaris. We’ve perfected riding about every machine they make. We started riding their Outlaw 525-S quads. They were excellent freestyle quads. The boys traveled the world performing on these machines for huge crowds. Then, they hopped on the IQ600-R Snowmobile for their Winter X Games success. And now, the RZR XP1000.
When Caleb passed, our sponsors really stepped up to show some real support and Polaris was right there for us along with a long list of great relationships we’ve had for many years, including Rockstar Energy Drink, Fly Racing, and Kicker. So, when the idea came to them to support our team, they stuck by our side.

A Best in the Desert team with a RZR XP1000 built by Lonestar Racing. Drivers are Wes Miller & Dave Lazovsky. Co-driver is Tommy Scranton. We will also race Baja 500 (norte) and Baja 1000 with myself and Tommy Scranton stepping up to drive.

A GNCC team with multiple RZR’s driven by Jordy Reed and Ryan Springer headed up by Bikeman Performance from St Croix Falls, WI.

In the end, all of this has come together in the 11th hour, fueled by passion that was fueled by Caleb Moore. Somehow, this umbrella of great owners, drivers, crew members, wives, girlfriends, etc, just seems to work together well. And we’ve just started.
Colten had a 3rd place finish in his RZR at Lucas Oil Off Road Regionals in Glen Helen along with a 4th place finish in Pro Lite. We had a few issues with our machine at rounds 2 and 3 at Elsinore but the Pro Lite finishes were solid there with a 7th and 6th.

The Mint 400 was an incredible experience. We received our car from Lonestar Racing a few days before so we had limited testing time. But, Wes Miller, with a ton of desert racing experience on a quad, stepped up and got things handled. Dave’s experience in desert racing is limited and for the first race, I would’ve preferred Wes stayed behind the wheel. But Dave set my mind at ease and hopped in for final lap and did an incredible job getting the 1988 to the finish in 6th place. It wasn’t easy though. We broke a belt with only about 15-20 laps to go but Tommy Scranton, a regular on the LOORRS Regionals circuit racing Production 1000 RZR, was able to change it in just a few minutes keeping us in the top 10 for a 6th place finish. With 55 entries, we couldn’t be happier.
rOtation Motorsports couldn’t be happier with the start of our 2015 year. Thank you to all of the great sponsors that shared this vision and got behind our team. Thank you to all of the great friends we’ve made so far as racing is definitely one big family.
We’re looking forward to some success with rOtation Motorsports as a whole. With hard work, perseverance, and some luck of course, we will all have a ton of fun, learn a lot, and hopefully have some success getting Colten to a successful spot in Off Road Racing. 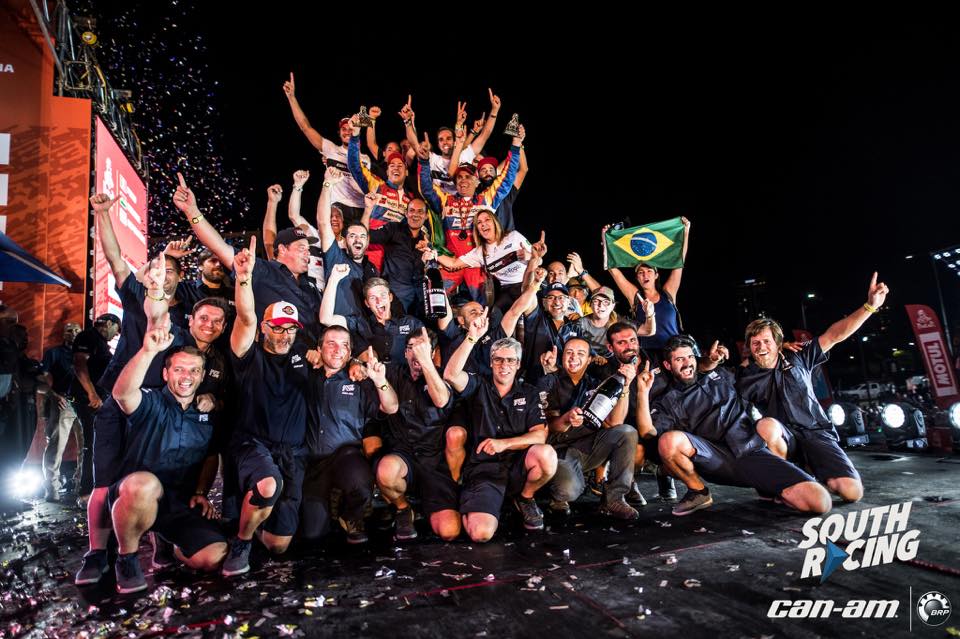