Team Wolfpack Press Office – Glen Helen Raceway, San Bernardino CA — Round 3 of the Lucas Oil Regional Off Road Series showcased another outstanding turnout of fans and drivers alike. The Walker Evans / Polars RZR XP UTV class boasted a whopping 30 cars. With the competition getting stiffer and the number of cars growing, it is making for some exciting race action on the track.

The Rockstar Energy / Polaris UTV Wolfpack teammates arrived on track ready for battle and laid down some quick lap times in the early morning qualifier. Despite some “questionable” cheater cars on the track, the Wolfpack RZRs outran most of the field awarding Jason Merrell the pole position for the main event.

Starting up front, Jason Merrell’s Rockstar Energy RZR kept good pace with the top three for several laps until the #718 Polaris got tangled up with another driver. He battled back and forth for position, but finished the race just off the box in the 5th place.

Jeremy Merrell had a great start to his race after starting 12th halfway up in the deep field. Jeremy quickly worked his way into 4th position on the first lap. Unfortunately, a few laps later, a huge impact on the front of his car would stop his race early. Bryan Carr would make his way from a 7th place starting position progressing all the way up into the top 4. Unfortunately, Bryan would later submit due to a hole in his radiator and overheating issues would keep him from finishing the race. Jordan Cochrum had some qualifying issues and was forced to start way in the back of the field. Managing to fight his way through roughly 19 cars, Jordan applied perseverance and smart racing to earn a 12th place finish.

The Wolfpack finished this race a bit wounded but certainly not out for the championship with Bryan Carr and Jason Merrell sitting in the top ten for points.

Be sure to come check out the next race at Glen Helen on July 13, 2013. For more team & series info visit www.UTVWolfpack.com and “Like” UTV Wolfpack on Facebook.

The team would like to thank all of their sponsors and supporters and are looking forward to the next race weekend. The Rockstar Energy / Polaris UTV Wolfpack is sponsored by: 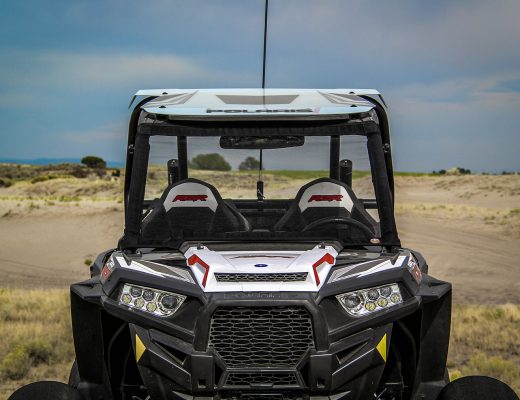