RJ Anderson Puts His Polaris RZR S on the Podium Minneapolis, Minn., (10/2/2009) – RJ Anderson had another successful weekend at rounds three and four of the TORC short course series at Perris Auto Speedway in Perris California.

Round three was held Friday September 25 and due to TORC rules, Anderson gridded his RANGER RZR S in last place despite being the fastest qualifier. Halfway through the race, he had worked his was up to third place and with two laps to go he made the pass for the lead.

“My RANGER RZR S was working great and we had new shock valving and an improved clutch set up for the race,” Anderson said. ‘We were just taking it easy until two laps to go and we really went for it, taking the lead and held it to the finish.” Round four was held the next night at Perris Auto Speedway on September 26. Anderson gridded sixth during the race and again worked his way up to second place. On the last lap he was side by side with the leader and drifted wide and hit the outside wall pretty hard.

“We broke something in the rear of the car and I was happy to just limp the car home for a second place finish,” Anderson said.

With his first and second place finishes RJ Anderson extends his points lead to 88 with just two rounds remaining. Rounds five and six will take place on October 23-24, at Las Vegas Motor Speedway.

With annual 2008 sales of $1.9 Billion, Polaris designs, engineers, manufactures and markets off road vehicles (ORVs) including: all-terrain vehicles (ATVs), the Polaris RANGER, snowmobiles, and Victory motorcycles for recreational and utility use. Polaris Industries Inc. trades on the New York Stock Exchange under the symbol “PII,” and the Company is included in the S&P Small-Cap 600 stock price index. Information about the complete line of Polaris products, apparel and vehicle accessories are available from authorized Polaris dealers or anytime from the Polaris homepage at www.polarisindustries.com. 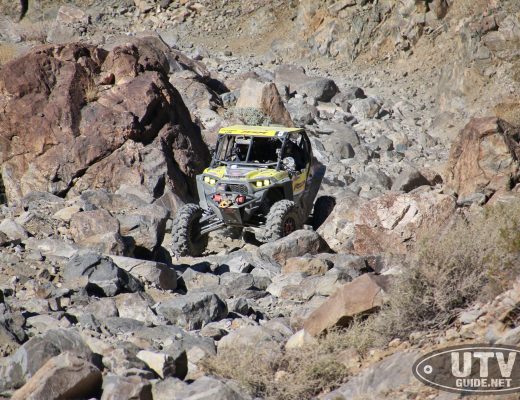