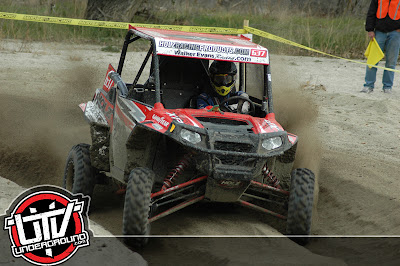 Riverside, CA 1/30/2012 – 2012 is here, but for RJ Anderson it still looks a lot like 2011 as the wins and accomplishments just keep on coming. For the entire Walker Evans Racing team there was not a lot of down time between the final round of racing in 2011 and the first rounds of racing in 2012. Just barely enough time to slightly prep the now #1 Lucas Oil Off Road Racing Series (LOORRS) Walker Evans Racing / Polaris RZR XP900 Unlimited UTV and have it ready for its next date with dirt. Ironically, its next competition wouldn’t be on a track, nor would it be banging doors and going for a checkered flag win. No, instead it would be to lineup at the end of a 150ft + runway to attempt a world record jump at the 2012 Soboba GP Long Jump Contest. Just under 10 competitors would line up their UTV’s to take their crack at who could go the farthest in what is now being dubbed the UTVUnderground Soboba Leap competition. Each UTV would get 3 runs at the jump with all 3 jumps being measured for distance. The winner would take home a nice little payday of $1000.00 with the runner up taking home $500.00. Not bad for a couple hours play under the lights and in front of a hyped up crowd. All of this was being held at the Soboba Indian Reservation where the weekends main draw was the Soboba GP UTV race taking place the following day. RJ and his good friend Doug Mittag would go to work, battling each other for the money and the glory. Having raced each other for many years this was just another opportunity for bragging rights and neither young star was going to back down. Both would let it all hang out and on RJ’s final jump he would hurl his freshly #1 plated Championship Polaris RZR XP900 off the lip of the jump and send it 151ft setting a new UTV long jump world record! A few jumps later Mittag would beat that jump and put his ZX-10 street bike powered Teryx into the record books with a 163ft leap that would bring the Walker Evans Race team to their feet. These kids pushed the sports envelope and their vehicles to the absolute limits and the crowd responded. Despite being runner up, RJ still held onto the record for the longest jump in a factory powered UTV at 151ft! While Mittag’s jump was over 10ft further, he was in a street bike powered UTV giving him a healthy advantage in getting that run. Not to take anything away from Mittag, he is a Walker Evans Racing supported racer and we were proud to watch him go big! In the end the 2 friends laughed at how much fun they had, already smack talking each other in hopes they will both be back for next years leap.

Still high on the excitement from the jump contest the night before, RJ and the Walker Evans Racing team arrived back at Soboba ready to take care of business in the big show. The Soboba GP is a historic Southern California race event, held on the private Soboba Indian Reservation and known for its glorious dirt, the Soboba GP was famed for its once a year MX event. While the MX racing at the GP still draws pro’s from around the world of factory MX racing, it is apparent that today the main draw is the UTV race. Its a “run what ya’ brung” style race with 1 open class. Racers are lined up in a single row based upon the orde they registered in and its a land rush start once the green flag drops. From there the race is a 2 hour long moto through the hills and MX styled infield. The track totals just over 6 miles long and causes for some serious attrition. This is not a race that you try to win in the first lap. Patience is key, consistency is even more important, and knowing how to keep your vehicle alive is the trick! On this day RJ followed his game plan to a “T”. While others took on the task of trying to race the first lap like its the last, RJ chose to get the best start he could, settle into a good pace, and start to pick off the slower traffic one by one. Within an hour, RJ would be the first UTV on course. 33 UTV’s would thunder into turn 1 yet only 14 would make it to the checkered flag. Fortunately for RJ and the Walker Evans Racing team, RJ would cross that line #1! He took his newly completed Walker Evans Racing / Holz Racing Products Polaris RZR XP900 up and over the hills like a man on a mission. The UTV built specifically for the 2012 WORCS racing season was easily the fastest UTV on the track that day and despite what some may have believed to be different, won the race with a stock Polaris XP900 power plant! The advantage was the driver and RJ was on his game. The team picked right up where they left off last season, taking home a huge win at the opening race of 2012 and $3500.00 cash! That put RJ at $4000.00 in winnings for the weekend leaving the team to ask RJ where he was taking them all to dinner?
The Soboba GP was a fun race and an overall great weekend. But for Walker Evans Racing it was more of a test and shake down for their new Holz Racing Products built Polaris. With UTV racing on the rocks at LOORRS, Walker Evans Racing has shifted their UTV race focus to the WORCS racing series. WORCS is the premier UTV racing series on the west coast, hosting events that are drawing upwards of 40 + UTV’s and multiple manufacturer supported teams. For RJ and Walker Evans Racing, this is exactly the UTV competition they desire and thrive on. So late last year the decision was made to compete in this series where UTV racing is quickly rising to become the biggest draw. With the help of their factory sponsor Polaris, they partnered up with Holz Racing Products once again to build a new race car specifically for this series. They ran it 2 times at WORCS at the end of last year which resulted in a win at the final round in Surprise, AZ. From their the UTV went to Soboba where it would WIN that 2 hour race. Its next challenge would be 1 week later at RD1 of the WORCS series held at Glen Helen MX Park in San Bernardino, CA. Everything leading up to the race was perfect, until the night before when rain began to fall all over Southern California. The rain didn’t let up until a couple hours before the green flag was scheduled to drop, by then it had done its damage.

49 UTV’s staged for RD1, the largest UTV car count for any racing series on the west coast. That kind of car count despite the weather was a sure sign that this 2012 season will be the biggest and best yet for WORCS. RJ was staged on row 1 of the Production 1000 class which is the premier class at WORCS. Once the cars would leave the line RJ would never find himself too far back despite losing the mud bog down to turn 1 otherwise known as Talladega due to its high banked turn. Always chomping at the heels of the leaders RJ continued to put pressure on those in front of him while remaining consistent and calm. As the mud flew and the track got slicker and nastier the Walker Evans Racing / Holz Racing Products Polaris RZR XP 900 just got stronger. The biggest hurdle for RJ and the leaders at WORCS is lap traffic. The format is as such that all 4 classes of UTV’s will be on the track at the same time so it is not uncommon for the faster class vehicles to be slowed by a lower class UTV in front of them. This would hinder RJ in the end, giving the leader just enough room to finish the 45 minute race in 1st and keeping RJ in 2nd. While winning is always the goal for RJ and his team, winning a championship is still the #1 focus and a 2nd place finish in this mud bath race left them with plenty to be happy about. The RZR XP900 ran flawlessly with its stock power plant and it was apparent by RJ’s table top jumps that the Walker Evans Racing shocks were dialed to his liking. Round 2 of WORCS will be held the second weekend in February in Primm, NV better known as “Stateline”. The team, like everyone else in the series, is hoping for a dry weekend where they can eliminate the weather as a factor. RJ and team are ready to go for their first win of the 2012 WORCS season, and knowing how they compete, we wouldn’t expect anything less.

We are proud to announce that RJ Anderson’s new personal race site has been launched! RJ37.com will be where RJ and his team will keep fans, sponsors, and those interested on what and where RJ is competing in the know. Its a great way to keep everyone informed on his progression throughout the season and his career. So go visit RJ37.com often and keep up on all things RJ Anderson. A more formal PR on his new site and the new Walker Evans Racing site will follow in the coming weeks. 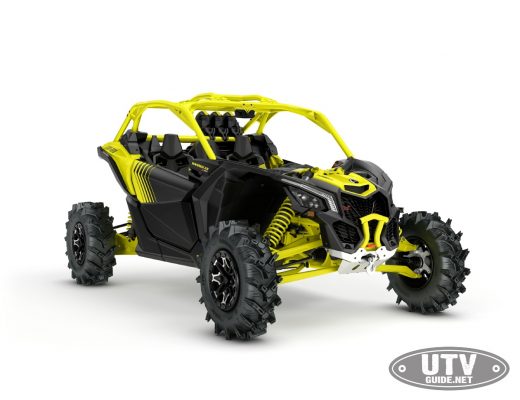