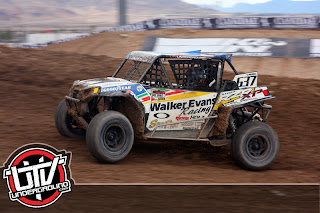 Riverside, CA 11/17/2011 – It was a big weekend in Las Vegas for rounds 13 & 14 of the Lucas Oil Off-Road Racing Series (LOORRS). With the stands packed in honor of fallen competitor Rick Huseman, the level of competition on the track was lifted to a level not seen all year. Racers in all classes competed with heavy hearts and payed respects with their vehicles sporting #36 tribute decals in honor of Huseman and his younger brother Jeff who were tragically killed in a air plane crash weeks prior. Rick Huseman’s older brother and crew chief Dan Huseman, took his #36 Monster Energy Toyota around the Las Vegas Motor Speedway track for one final lap while the fan packed stands looked on. With the sun shining and the brisk air surrounding the track the racers, including RJ Anderson were ready to honor Rick the best way they knew how, by racing hard and leaving it all out on the track!
RJ and the Walker Evans Racing team came into the weekend with one goal in mind, that was to win in every class he was to compete in. RJ had 3 classes again this weekend, 6 races total, so his race schedule was packed as usual! He would be competing in Unlimited UTV, Super-Lite Championship, and in Pro-Lite. While winning is always a goal for this competitive team, the season is nearing the end so it was time for RJ to start making the moves necessary to 1. sustain his points lead in Unlimited UTV and 2. get himself into position so that with a little help from fellow competitors, could help him win a championship in Super-Lite and 3. show everyone why he ended up 2nd in the points championship at TORC in his rookie year.
Saturday’s round 13 would kick off for RJ behind the wheel of his Walker Evans Racing / Polaris RZR XP900 Unlimited UTV. Here is where RJ is the formidable points leader and the one to beat week in and week out. This was the first season in a while where the team finally felt like they had the power necessary to overcome the bigger V-Twin Kawasaki’s. With the lead in points Anderson was adamant about putting on a good showing and finishing high on the podium and that is exactly what he did both days! While battling to keep his car clean and free from the other’s on the track, RJ was able to pull off 2nd place podium finishes both days while piloting his fast and reliable Kroyer powered Polaris RZR XP900. 2nd’s on both days help extend RJ’s points lead and put him in position so that all he will need to do at round 15 in Arizona is start the race! With that start RJ will claim the 2011 LOORRS Unlimited UTV Points Championship. Huge honors for a team filled with har working individuals and dedicated sponsors.
Next class of the weekend for RJ and Team was the Super-Lite Championship Series. This spec class has been highly competitive and challenging this year. RJ has had the points lead in his sights numerous times this season but circumstances have continued to force RJ to relinquish those sights back to mear hopes. Currently RJ sits 3rd in points and after 2 days of hard racing in Las Vegas RJ would end up with a BIG win on Saturday! Not only would RJ collect the top spot on the podium, he would also claim fastest lap honors for the race after tearing off a spectacular time in lap 9 of the race. Unfortunately Sunday’s race would unfold differently for Anderson resulting in the ONLY race for RJ all weekend that he would not reach the podium. Heading to Arizona for the final rounds of LOORRS, the Walker Evans Racing team will be shooting for a clean sweep in Super-Lite, ending the season on a high note for that championship chase!
The largest races of the weekend for RJ and the team were in the Pro-Lite class where the field would be filled with trucks. 17 Pro-Lites would take the checkered flag causing for some tight racing both days. With doors banging and fenders flying, RJ in his V8 Powered RAM Pro-Lite was able to keep pace with leader Brian Deegan and finish strong both days on the podium. Saturday’s race would see RJ taking home the 2nd place trophy just behind Deegan. Sunday would find RJ edging out famed off-road racer Cameron Steele for a strong 3rd place finish behind Deegan and Brandt, 2 very seasoned veterans in the Pro-Lite class. It is obvious to all involved in short course racing that RJ Anderson is the real deal! Unfortunately for the team a post race inspection would attempt to rob RJ of his 3rd place finish due to being a 1/4″ too long in wheel base, thats right, a 1/4″! Walker Evans Racing is protesting the decision so until it has been finalized the team will continue to celebrate its 5th podium finish in 6 races all weekend! A feat accomplished by very few in the sport.
We at Walker Evans Racing are proud of RJ and all of his accomplishments this season and look forward to a strong season finish at LOORRS Firebird and an even better year next year. RJ and the Walker Evans Racing team is currently seeking sponsors for the 2012 season, if you are interested in being a part of this competitive and championship caliber team please contact Brian MacLean of Walker Evans Racing at brian@walkerevansent.com or by phone at 951-784-7223.

Left or right? . . @caseycurrie has a matching set