Can Am Industry News Ride Spot 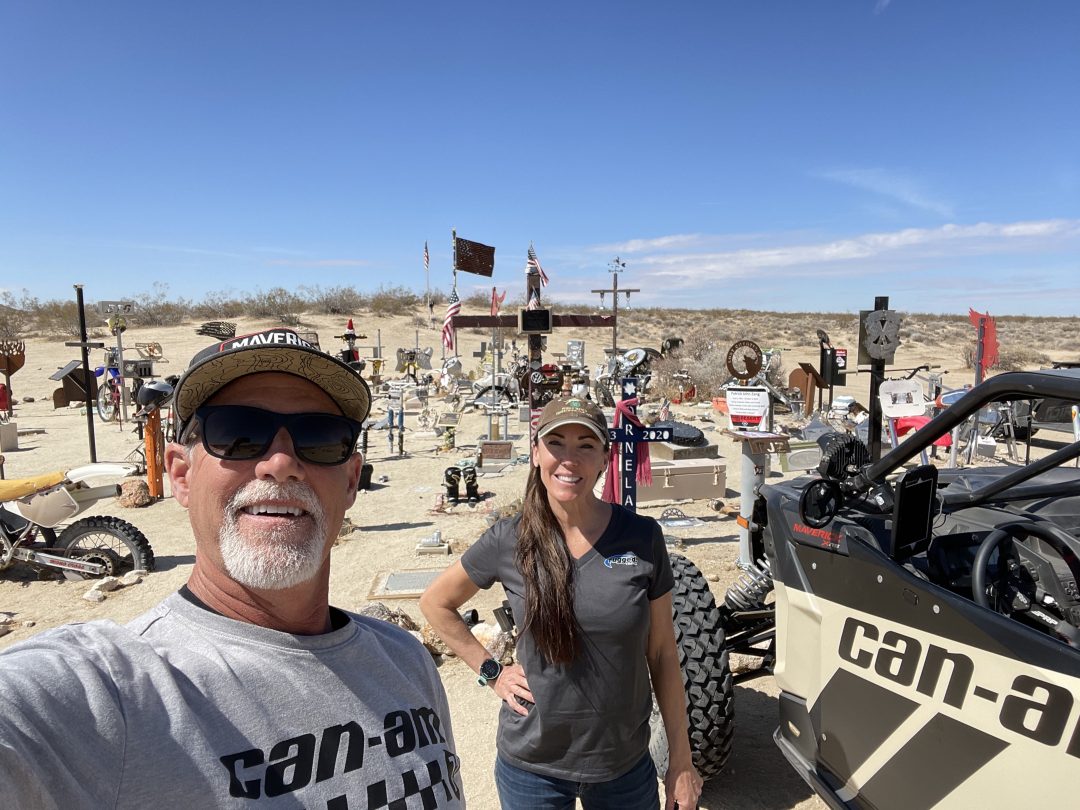 I don’t often get my wife Teresa out on rides with me, but when I do, I try to make it epic! After spending a few days in Glamis with some others in the UTV Industry, we hatched a plan to do some exploring in the Mojave desert near Randsburg. I have been to this area just a few times, but I knew it was filled with cool destinations built for off-road vehicles. Great trips like this take some research, and this area is no exception. Lots of little nuggets to find if you spend some time. 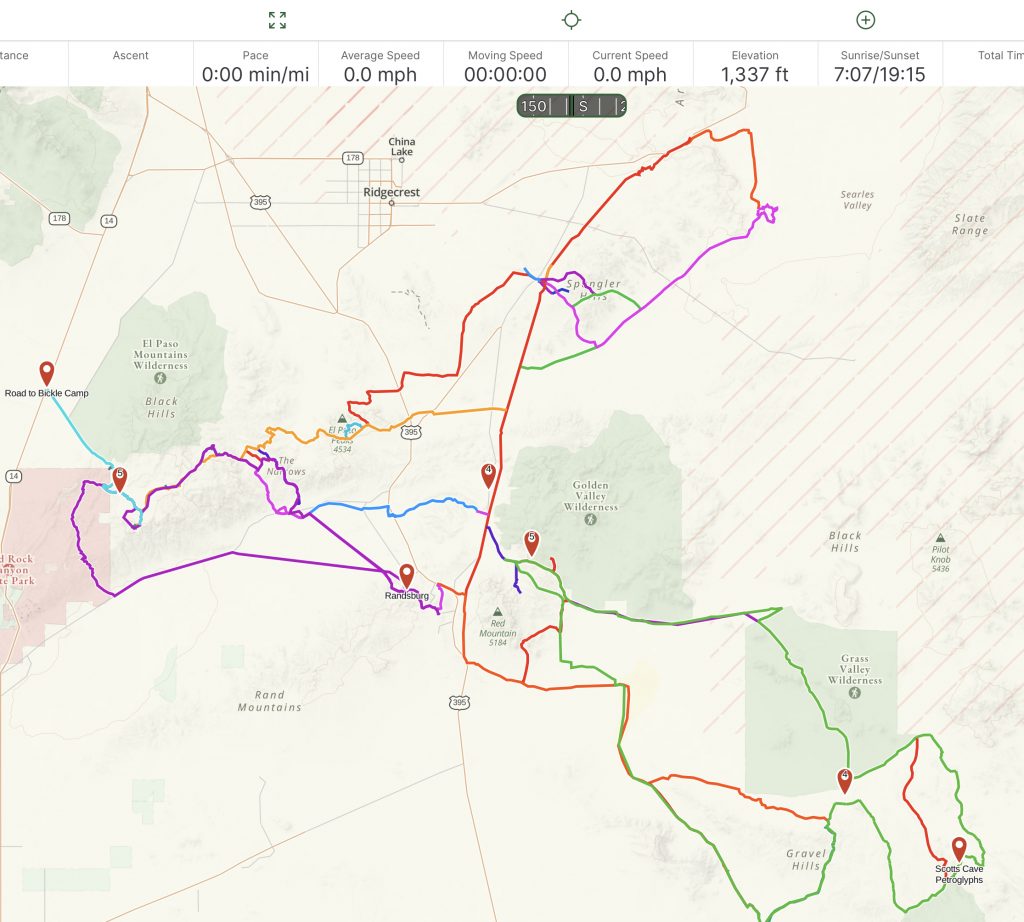 We used Gaia GPS to route-plan and track our three-day adventure.

With confirmation from SSV Works, Rugged Radios and Concord Polaris & Can-Am, I began to plan out where to camp and what destinations we should hit. After playing around on Gaia GPS and talking it over with Trevor from SSV Works, we had a rough outline for three days. I decided on a camp spot just off of Trona Road near towns of Johannesburg and Randsburg.

This central location gave us access to three different day trips that were all 50-70 miles:

In addition, Johannesburg has fuel that you can ride to in your UTV. 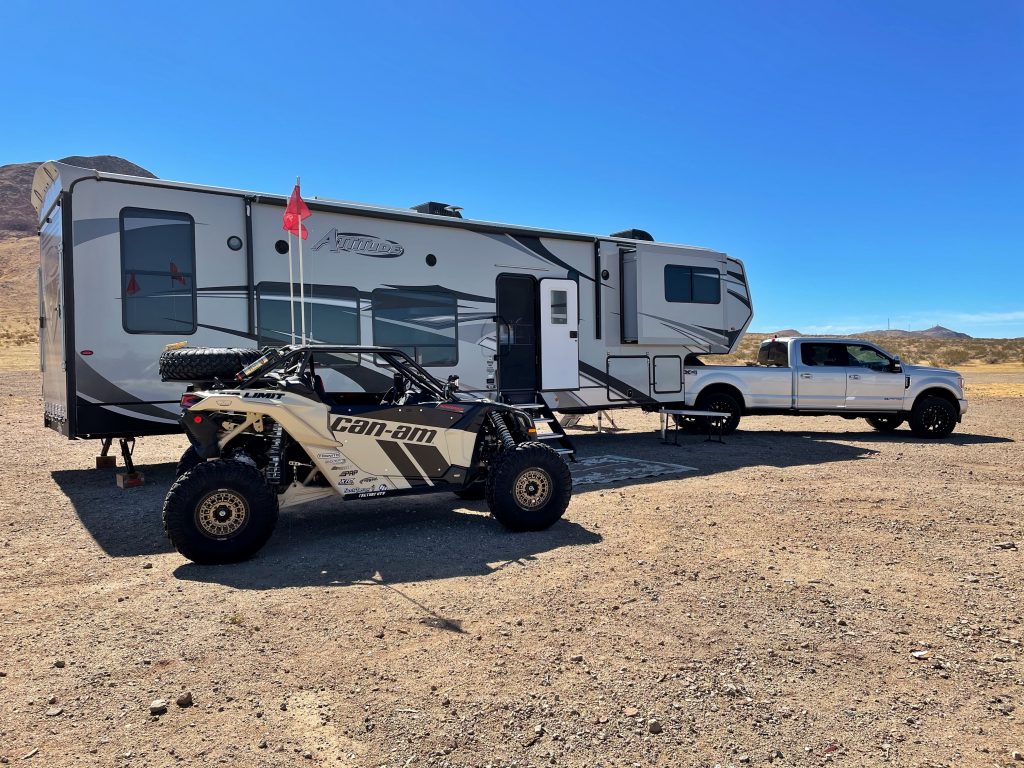 For this adventure, we brought our 2021 Can-Am Maverick X3 XRS with Smart Shox and our Attitude 3218MM Toy Hauler

One feature of our 2021 Can-Am Maverick X3 on this trip is the Smart Shox. Since we were on more of an adventure ride and I had my wife Teresa with me, I wasn’t in a haul-the-mail type mode. We were cruising at a good clip, but I wanted the ride to be as comfortable as possible over the rough terrain. I set the three-way switch to “Comfort” and it really made a difference! From there, the “smart” part of the Smart Shox kicked in when we braked hard, turned sharp or “inadvertently” caught some air. This is a very slick system for all types of terrain, and Teresa definitely appreciated that!

Teresa and I, Kevin and Ally from Concord Polaris & Can-Am and Trevor and Kelson from SSV Works all arrive on a Tuesday about noon and by 1PM we had camp setup and we were on the trail.  First stop was the Trona Pinnacles.

The Trona Pinnacles are an unusual geological feature in the California Desert National Conservation Area. The landscape consists of more than 500 tufa spires, some as high as 140 ft, rising from the bed of the Searles Lake basin. The spires now sit isolated and slowly crumbling away near the south end of the valley, surrounded by many square miles of flat, dried mud and with stark mountain ranges at either side. The Pinnacles are recognizable in more than a dozen hit movies. Over thirty film projects a year are shot among the tufa pinnacles, including backdrops for car commercials and sci-fi movies and television series such as Battlestar Galactica, Star Trek V: The Final Frontier, Disney’s Dinosaur, The Gate II: Trespassers, Lost in Space, and Planet of the Apes. Music videos for Rihanna’s 2016 single “Sledgehammer” and Lady Gaga’s 2020 single “Stupid Love” were also filmed here.

From there, we ventured over to Fish Head Rocks.  This is a cool roadside stop located between Ridgecrest and Trona along Hwy 178. These “fish heads” were supposedly first painted in the early 1940’s and have been repainted many times as the locals seem to like having them there. 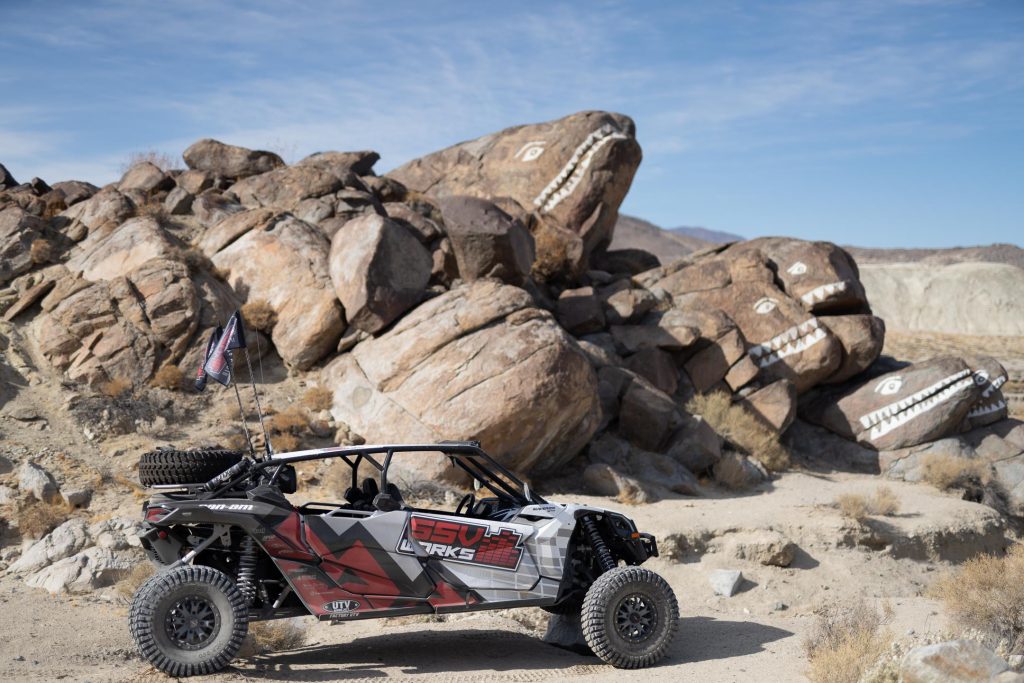 We stopped at Fish Head Rocks during day 1

After leaving Fish Head Rocks, we headed around to Wagon Wheel OHV Staging area to a spot called The Bar that overlooks Ridgecrest, CA.  This is a great spot to watch the sunset.

After leaving The Bar, we heading back to camp, but not before a quick stop at the X-15 Memorial. X-15 Flight 191, was a test flight of the North American X-15 experimental aircraft. It took place on November 15, 1967, and was piloted by Michael J. Adams. It ended in tragedy when the aircraft broke apart minutes after launch due to technical difficulties, killing the pilot and destroying the plane.  Adam’s reached a peak altitude of 266,000 ft before the aircraft ended in a spin and crashed. More info:  X-15 Memorial. 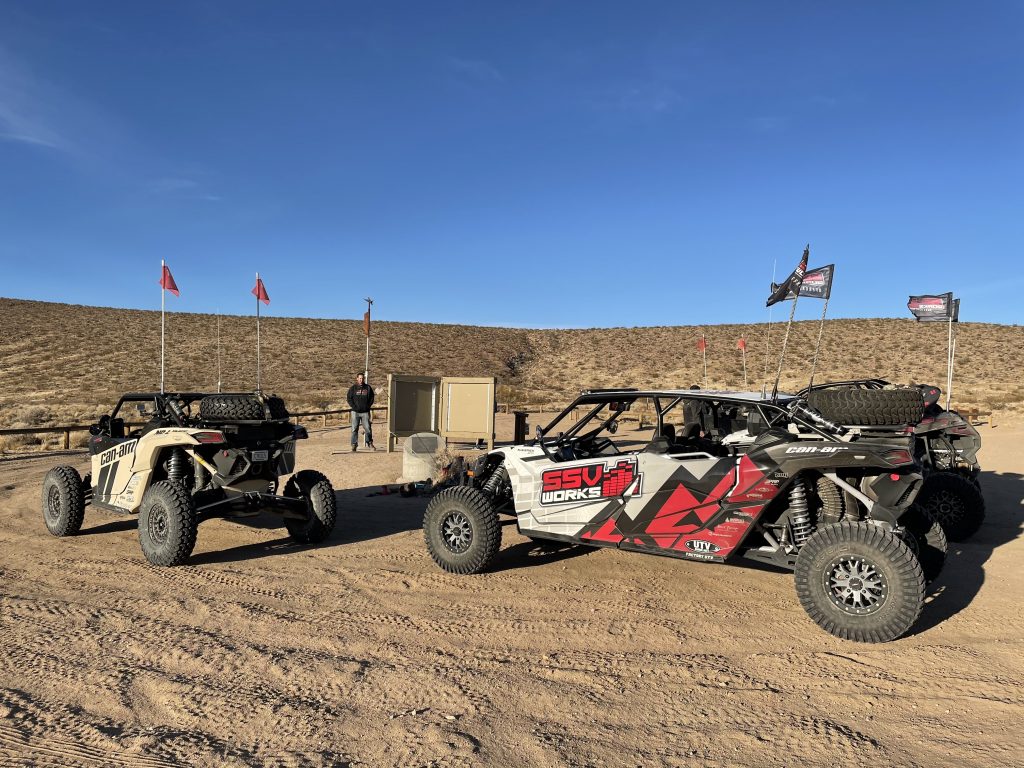 Quick stop at the X-15 Memorial for Michael Adams

Back at camp, Kevin and Trevor busted out some awesome tacos for dinner.

For our second day, we headed west through Randsburg and across the valley, under the railroad and across Garlock road. Then we headed up a canyon that had a section called The Narrows where we did a little easy rock crawling. Steve from Rugged Radios and Cody from Redline Marketing and Media also joined us. 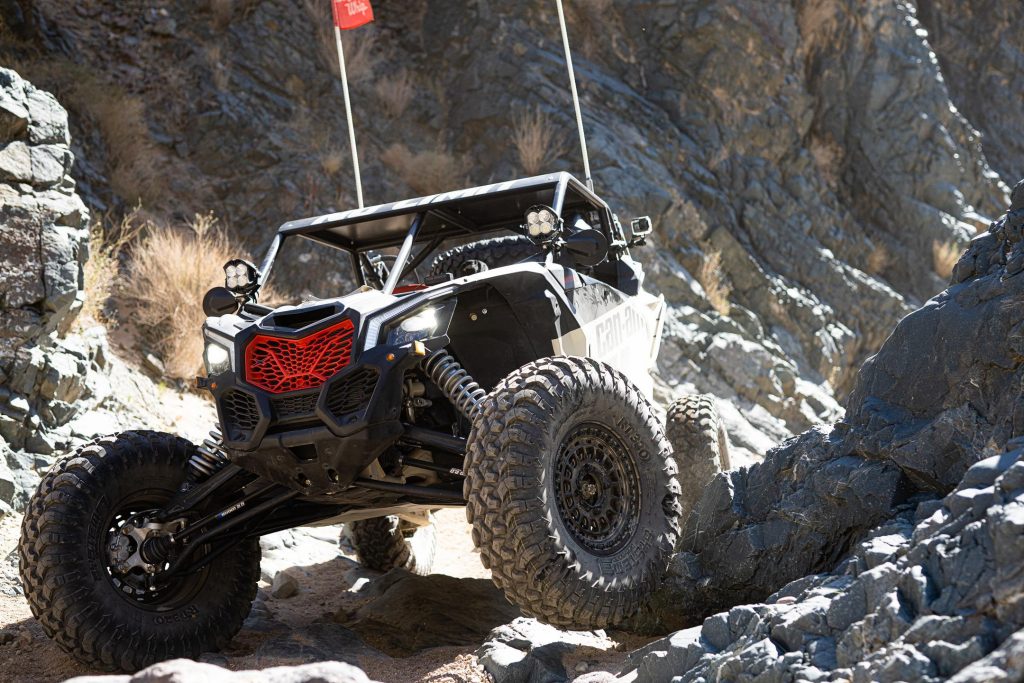 The next stop was Burro Schmidt Tunnel. “Burro” Schmidt, mining gold in the El Paso Mountains, was faced with a dangerous ridge between his mining claims and the smelter to the south in Mojave. Schmidt said that he would “never haul his ore to the Mojave smelter down that back trail” using his two burros. Thus, he began his tunnel in 1900.It took him 38 years to complete!

From the tunnel it was a quick ride to the next stop at Bickel Camp. Walt Bickel visited Last Chance Canyon for the first time in 1927, while en route to Nevada. He apparently thought the area was worth a second look because he returned in 1933 at the invitation of a Mojave man who had a mine in Last Chance Canyon. Figuring that there was plenty of gold to be had, Bickel filed his own claim in 1934 and built a small cabin. The cozy little cabin stands to this day, a monument to the man and the time. Bickel moved onto the site full-time after World War II and lived there until failing health forced a move in 1987. This stop was Teresa’s favorite over our three day trip with lots of relics to look at.

From Bickel’s Camp we headed down Last Chance Canyon.  This canyon has some more rock crawling and it is a neat ride back down to Garlock Road. This is NOT a trail I would try in my stock SUV, but we made easy work of it in our Can-Am Maverick X3. This trail goes through Red Rock Canyon State Park so it is important to stay on the designated route! 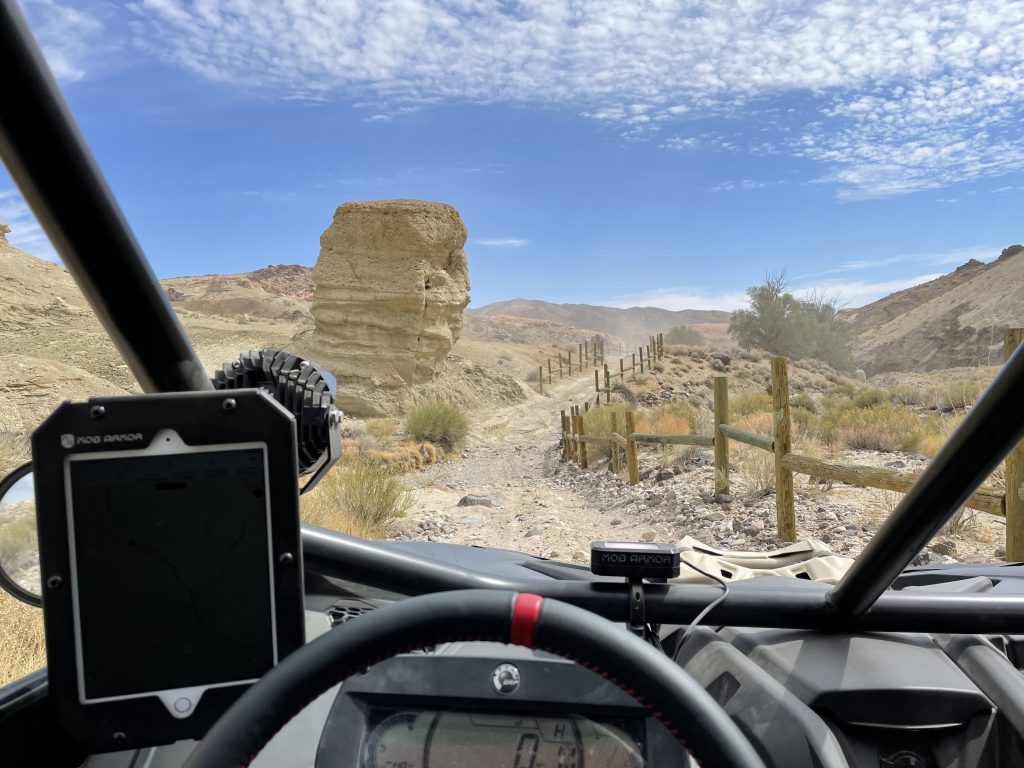 Back at camp at the end of another great day on the trail, Teresa decided we should celebrate! 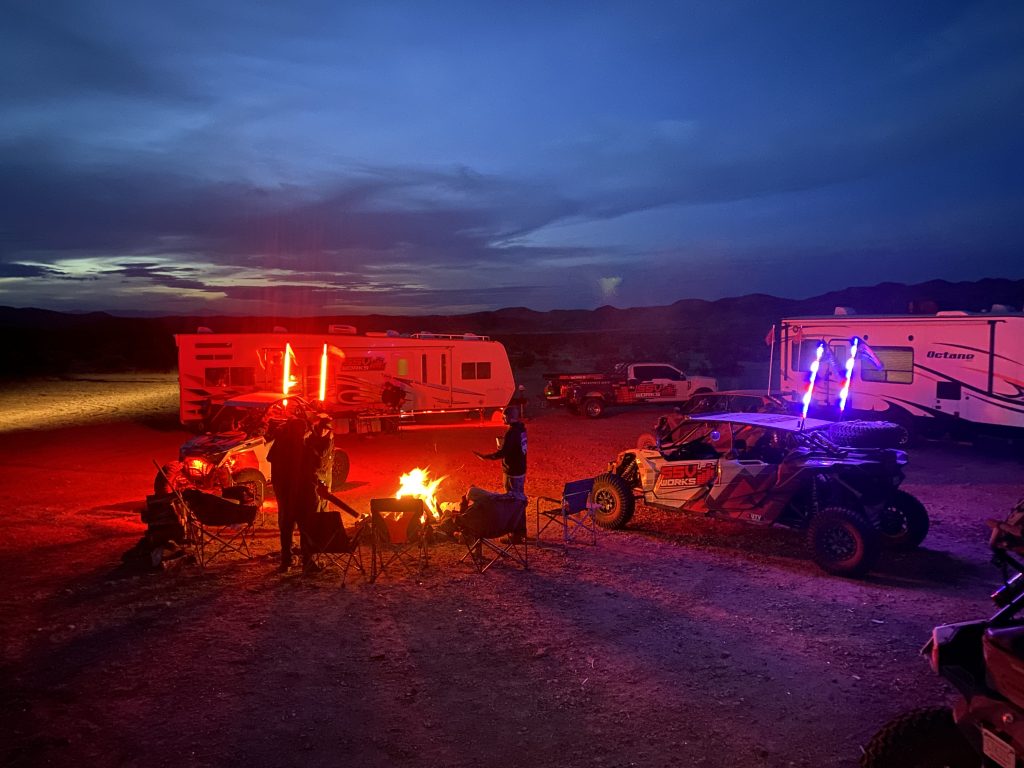 Nightlife at camp with tunes by SSV Works

Day three we headed southeast of our camp alongside the Golden Valley Wilderness Area, then on a designated corridor through the Grass Valley Wilderness. Once through the Wilderness Area, we made our way towards the Husky Memorial.  But first we had to check out rumors of a new destination called Jurassic Town.  Apparently modeled after nearby Tonka Town, you are supposed to “add” to this scene when you visit.  Trevor had come prepared with a new dinosaur to add to the collection.

While out exploring in the Mojave Desert near the Husky Memorial, we found a new destination called “Jurassic Town.” From what we understand, this is a newly created location and the deal is when you go there, you should bring a new piece to add to the scene.

The place looks like an abandoned quartz mine. Trevor from @ssvworks had heard about this spot and brought along a toy dinosaur to add to the collection. 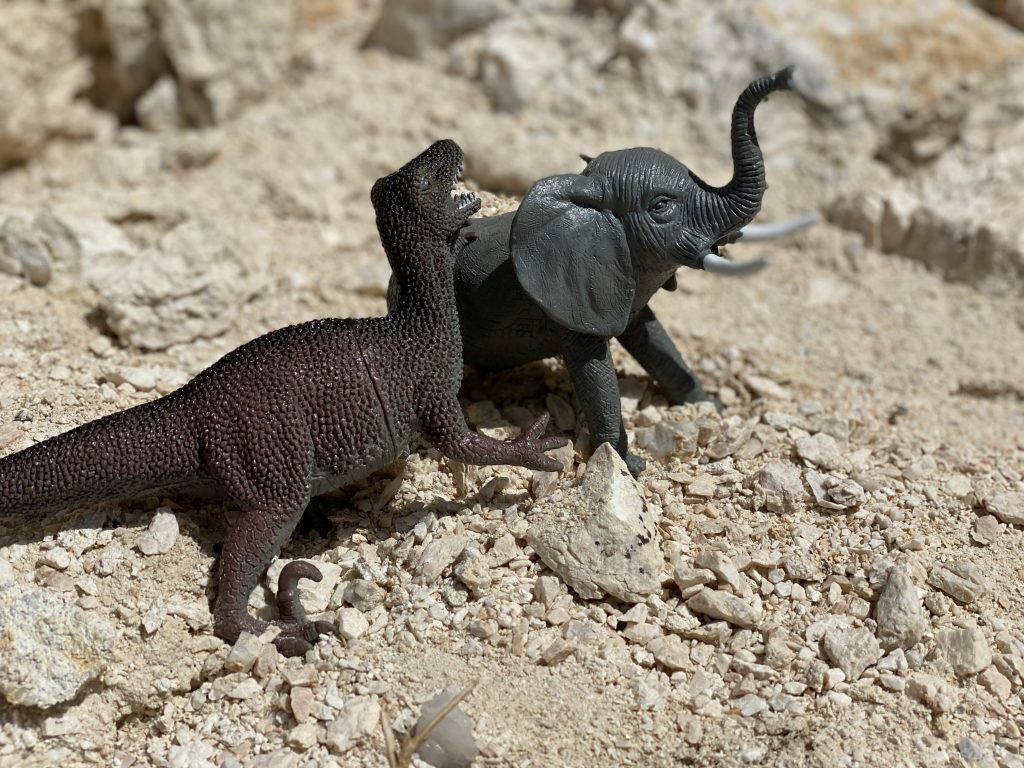 Jurassic Town appears to be a newly created destination in the Mojave Desert.  Bring a toy dinosaur and plan to add to the scene.

This spot appears to be modeled after nearby Tonka Town, which has become a cool destination ride closer to Barstow, CA. People can get very creative with their add-on scenes as the legend of the spot grows. Only time will tell if “Jurassic Town” grows…

While at Jurassic Town, we were lucky enough to experience a low-level flyover by a USAF B-52!

Just a short mile or so away we stopped at the Husky Memorial. Husky Memorial, also called Husky Monument, is a memorial for fallen off-roaders (especially motorcyclists). It all started in 1987 when Jim Erikson’s friend half buried a Husqvarna motorcycle in the dirt.  Since then many more memorials have been added on this BLM land.  Apparently this memorial is allowed by BLM but not officially sanctioned and it is a great destination! 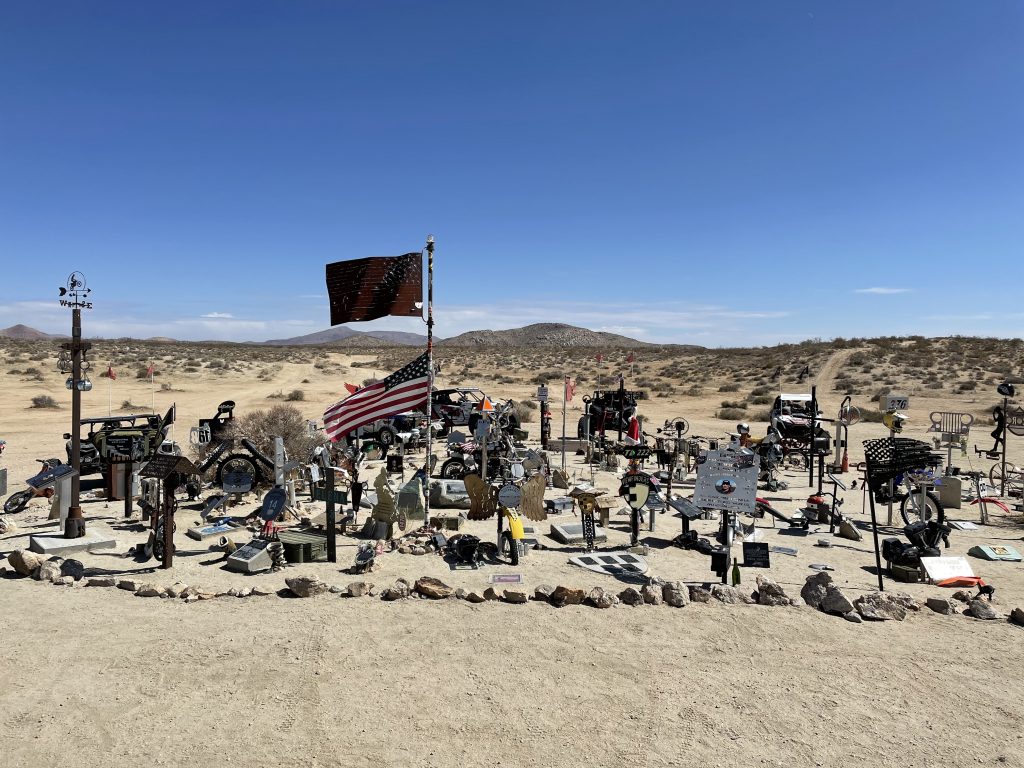 From there we headed over towards the Black Mountain Wilderness area to check out Scouts Cove and then Inscription Canyon.

From there, we headed back towards Grass Valley Wilderness area along a different route, then over to Cuddyback Dry Lake. We played on the lakebed for a bit before heading back to camp for the day.

Overall, I’d rate this trip as a 10/10! Good weather. Great friends. Awesome destinations.  No mechanicals on the trail or driving to/from Mojave.

Each of these day trips could be explored much more in-depth and you can find many camping spots closer to each of the three loops:

If you are interested in exploring this area, I highly recommend Gaia GPS.  I use it to research and plan routes at home on my computer, then while riding on my iPad with MobArmor GPS antenna. Once you have your routes figured out, I highly recommend that everyone in your group has communications.  We have radio and intercom from Rugged Radios and this allows Teresa and I to talk with each other, and we can also reach other vehicles to pass on info about turns, warnings or interesting things along the way. It also allows you to spread out so you aren’t eating dust all day long. 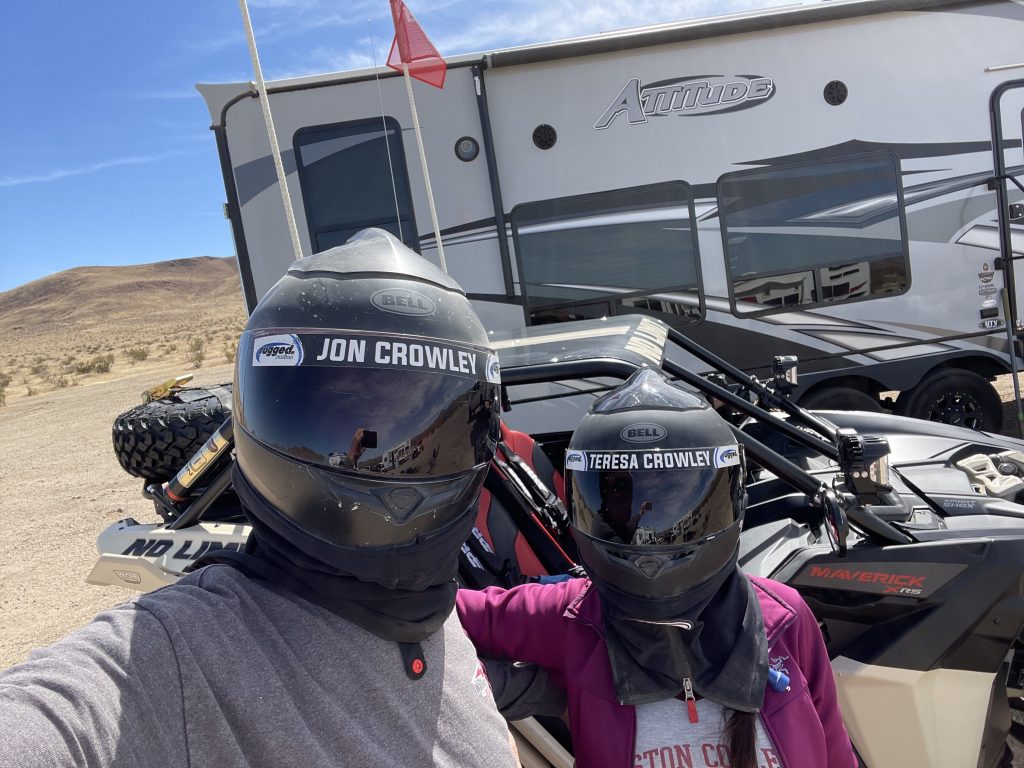 Full face helmets with a dust skirt and helmet blower from Rugged Radios is also a big help. 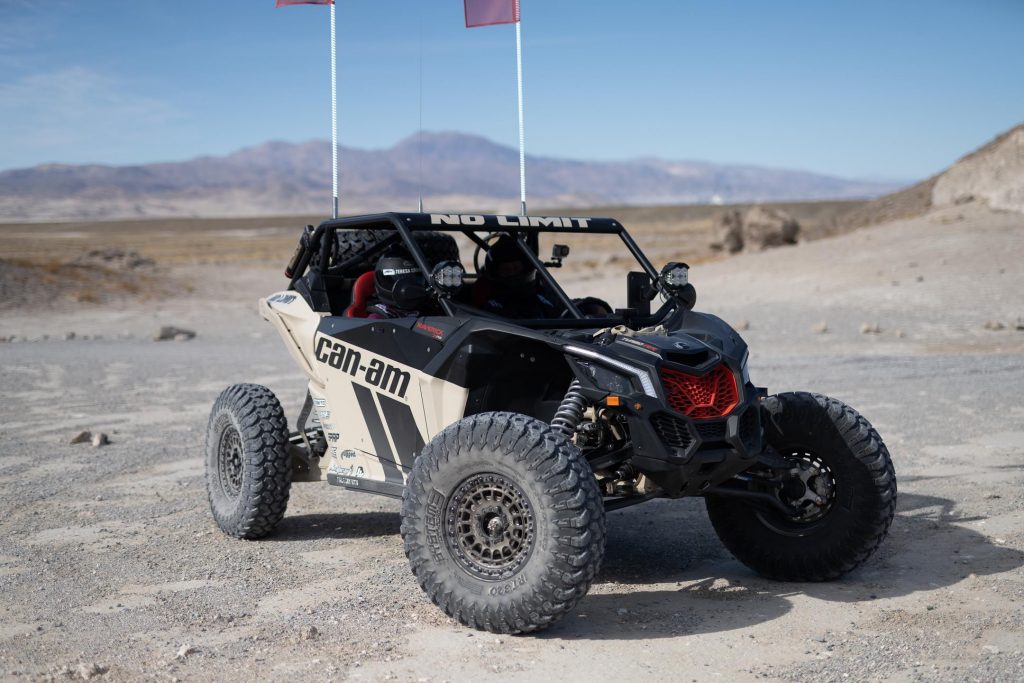 Our 2021 Can-Am Maverick X3 is outfitted with some awesome aftermarket equipment: 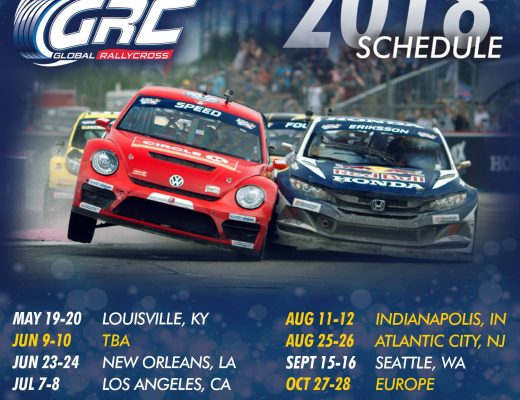