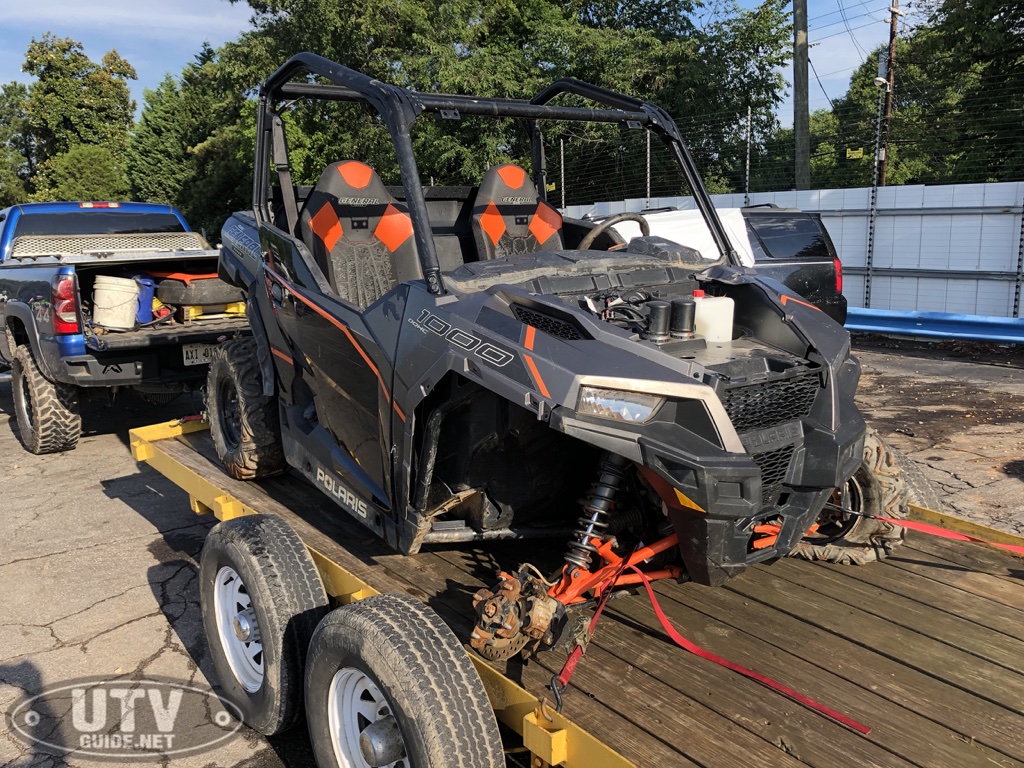 After a serious fight against a solid object, this poor Polaris General 1000 was left at the scrapyard to be torn to pieces by the DIY vultures. That was until we decided to try and breathe new life into the tweener from Polaris. We had been directed to this machine after a friend figured out that his wants exceeded his wallet so we took on the challenge as well as the price tag. 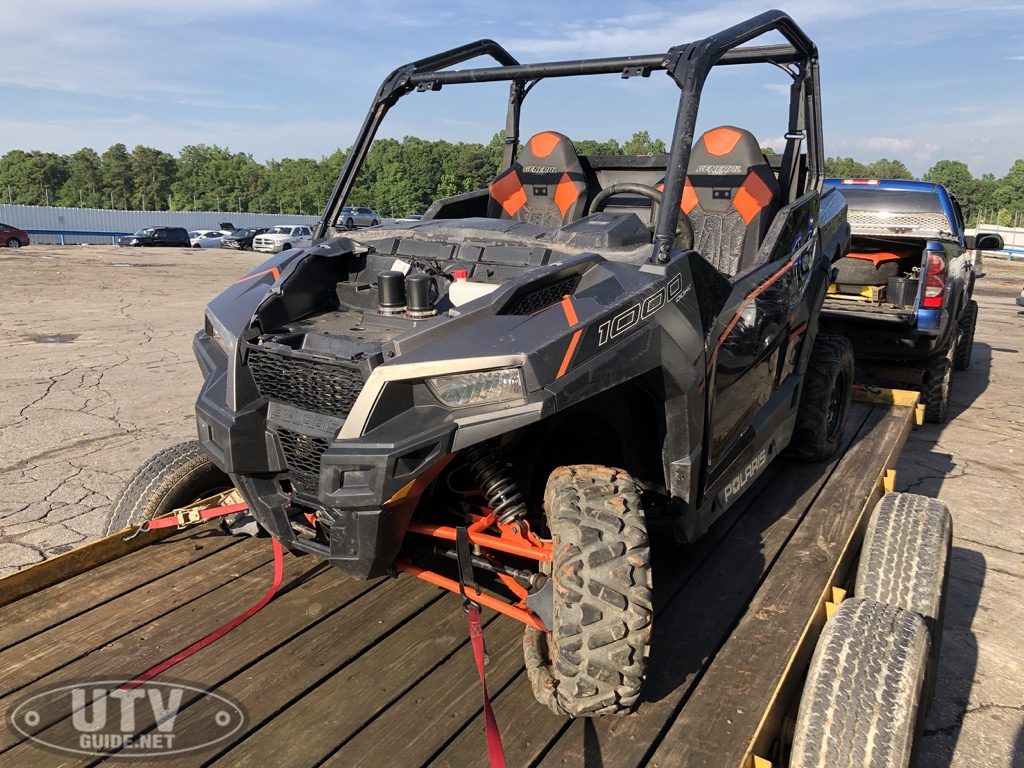 After a few close looks at the rig and a quick dissection of the damage as well as the factory VIN it was clear that this was indeed once a General 1000 Deluxe. It was apparent that some of the factory goodies like the roof, deluxe wheels and winch seemed to suspiciously disappear once the machine was dropped off at the graveyard but luckily I remembered where a few used parts might be and as the project evolves we have our eyes set on some aftermarket products anyway.

In model year 2017 the Polaris General gave potential owners a chance to trail rage, cruise and work as it was the machine that blended the Ranger and RZR lines into a middle ground rig. The powerful ProStar mill is stout and the power delivery in the General is very fun out on the trail. So, our goal with this rehabilitation is to address all of the factory suspension issues we now have (provided by the previous owner) and find some great aftermarket parts to add to the machines former glory. We could go back to the stock form but what is the fun in that? 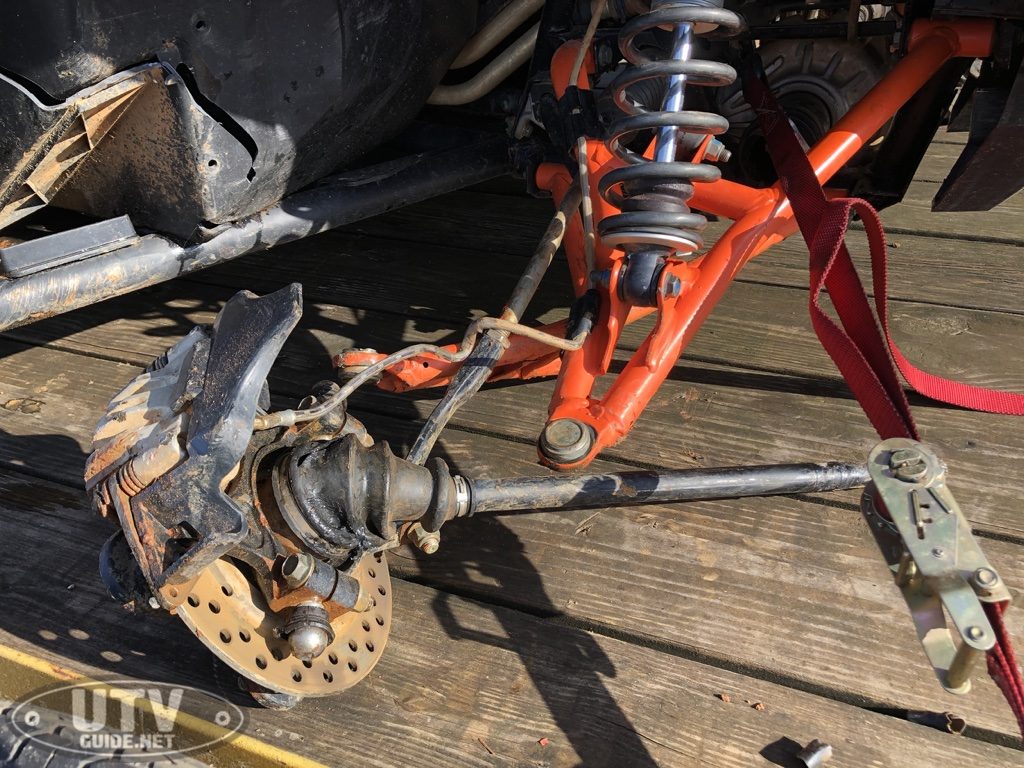 Obviously, the front suspension was our first concern as we would much rather have the machine drivable while it gets its makeover. The right front a-arms had all but been ripped off of the machine and we quickly discovered what all gets trashed when a good hit occurs on the front end. The lower a-arm had actually folded under the pressure and took the CV shaft as well as the brake line with it. The upper arm also suffered from the impact and bent mounting points on the machine looked to give us a little workout but would be easily straightened out. With a little time and some intense hammer work I was able to get the General back on its feet with what we had so we could move the rig around in the shop. After putting the right front wheel back on the now cobbled together hub and suspension I discovered the busted lower floor. We can put that on the back burner for now though as there are much bigger items to get to. 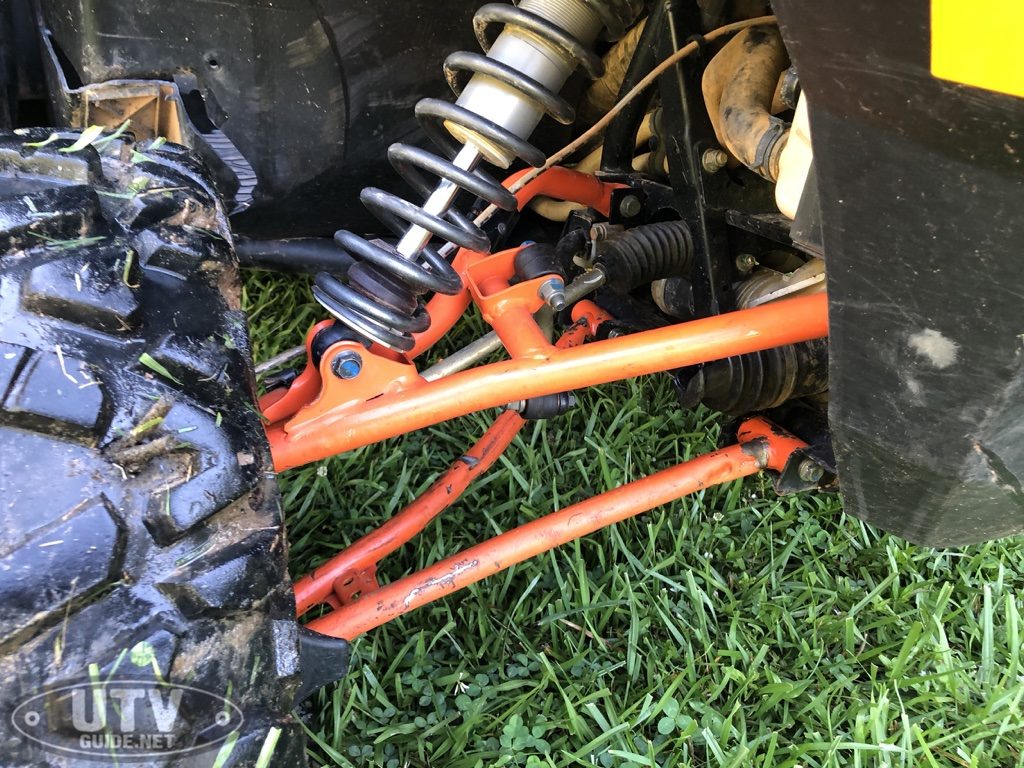 So, what do we do from here? Well, it was time to make a list of the items we thought would be priority and add in a few wish-list items as well. We knew that we needed some front suspension arms and we wanted a little better ground clearance without really lifting the General. We also wanted to put a “stronger than stock” set up on the machine as well and not limited to just strong steel arms but ball joints also. After all, a General, needs to be tough and ready when headed back to war right? During a trip through Indiana on a completely unrelated drive it was clear that we weren’t very far from the SuperATV.com headquarters. Having had great experience in the past with products made by this Madison Indiana company I thought it would be a good time to see not only the quality of their production but also what they might have for our Polaris General. 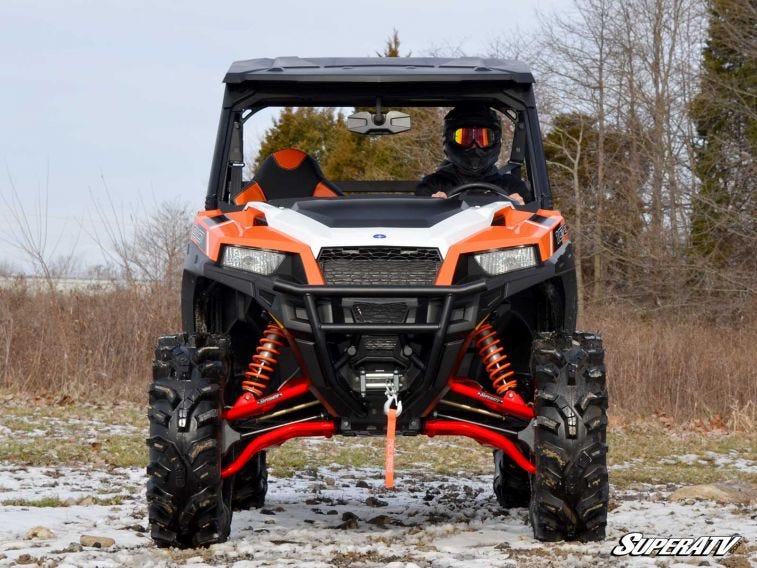 During our trip through the SuperATV.com shop, we found our high clearance suspension arms, with great extra ground clearance, as well as some super tough ball joints. 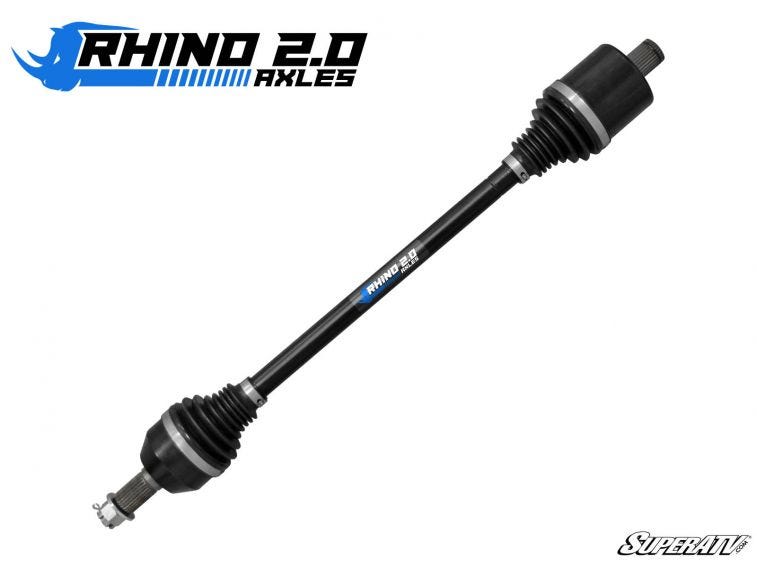 But that was not all as the Rhino 2.0 brand axles were born here as well and man the list just keeps growing. These parts are not only built very tough, but the pricing is also very reasonable. After a few days I had many big brown SuperATV.com boxes adorning the garage door with some very cool parts made in the USA for our SXS. 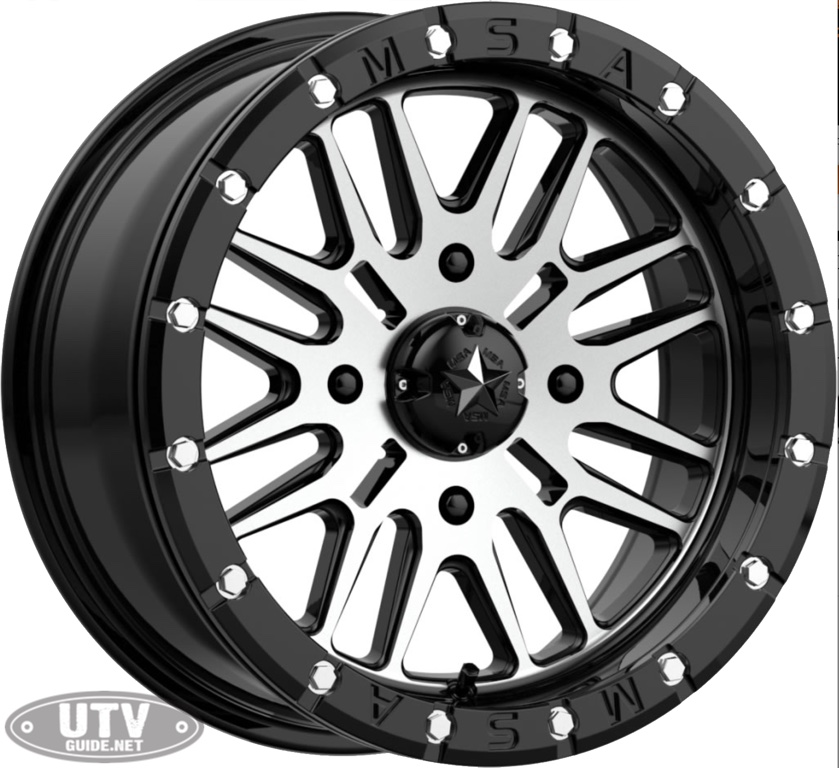 So, I mentioned earlier that the General deluxe wheels and tires had been replaced with mismatched takeoffs at the scrapyard. If the wheels had been in place, we would have simply replaced the tires with some great all terrain style tread but since the “Opportunity” had been presented I knew exactly what wheel tire combo I wanted to add to this project. The M37 from MSA wheels was the choice as the added grip from the bead lock and the cool styling seemed to fit within our goals for the General. Not to mention they will look great on this rig. 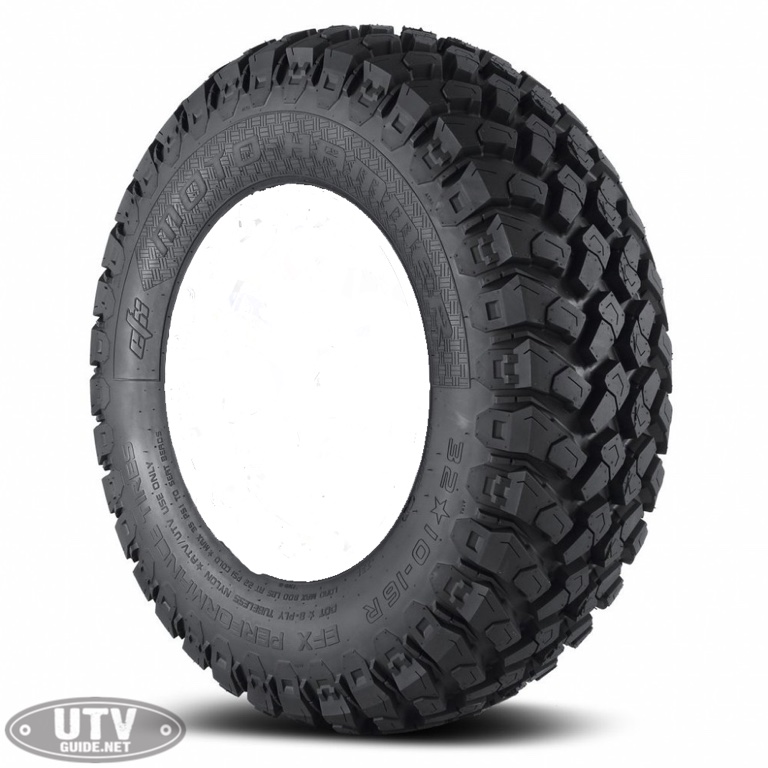 As for tires, we decided on the Moto-Hammer by EFX. This 28-inch tire will give the General great traction in a variety of terrains here in the Southeast USA and make those trips on the hardpack smooth as well.

Now that we have a great baseline for our project it is time to get to work. There are also some cosmetic items that we will need to get to like the scratched plastics and graphics that seem to have been rubbed off on every tree in the trails. Stay tuned to UTVGuide.net and follow along as we get this machine ready to once again hit the trails. 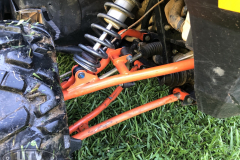 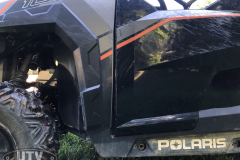 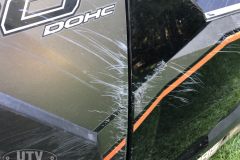 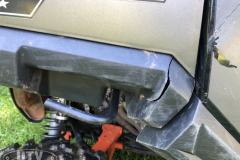 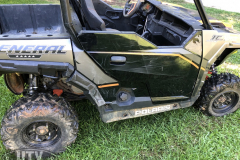 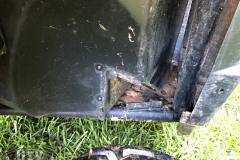 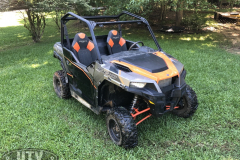 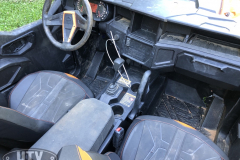 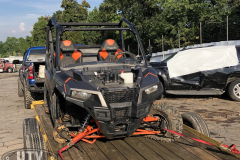 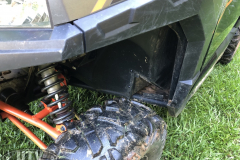