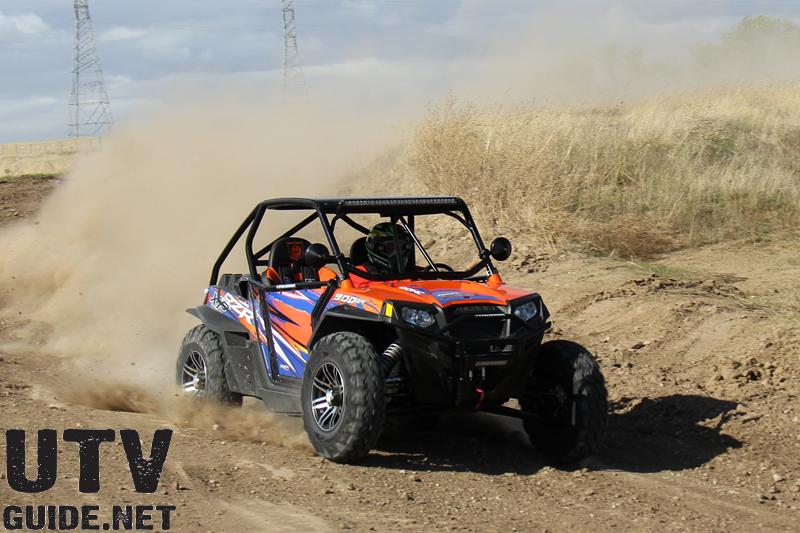 We are in the process of building up our new 2013 Polaris RZR XP 900 EPS Orange Madness/Blue LE so we can race it in the 2013 King of the Hammers UTV Race. But in doing so, we don’t want to end up with a car that is used solely for racing. First and foremost is must be a great all-around car that can still be comfortably ridden at the dunes, desert or on the Rubicon Trail.

In our opinion, the stock geometry of the RZR XP is perfectly suited to accomplish our goal of a multi-use machine. The 3-link Trailing Arm IRS design consists of two extra-long radius rods and a far forward-connecting trailing arm resulting in a strong, yet lightweight system. The RZR XP is outfitted with adjustable, 2-inch body FOX Podium X 2.0 shocks. The 14-inches of rear travel and 13.5-inches of front travel soak up most of the rough stuff and Polaris designed all this in with a solid 13-inches of ground clearance. In order to make the RZR XP more durable in a desert/rock race, there are a few changes that can be made to the arms and upgraded shocks can help tame the monster whoops.

There may be some long travel suspension kits available that could improve performance in the desert, but the extra width is not as favorable on tight trails or in the rocks. Plus once you move to a longer arm suspension, custom axles and shocks are required. By staying with the stock geometry, there is more focus on these items from a larger amount of aftermarket accessories manufacturers.

Last year we ended up racing our 2011 Polaris RZR XP at King of the Hammers, but it was a last minute decision after suffering a head gasket leak on our Kawasaki Teryx. This XP did well enough to get us fourth overall and third in the Production 1000 class. We had PURE Polaris trailing arm guards, and Factory UTV UHMW a-arm guards over our DragonFire Racing replacement a-arms. With upgraded FOX 2.0 shocks, we did pretty well in the desert and got through the rocks without too much issue. This proved to us that the stock unit was a worthy competitor. With a few more changes and more time, we felt our 2013 RZR XP can do even better this year.

Back in September, I had a chance to hook up with FOX to try out their new 2.5 Podium-X shocks with bottom out control in Barstow, CA. The shocks were a step above anything I had tried on a RZR XP, so I knew these shocks would be the foundation of my suspension. The 2.5 inch aluminum body allows a 50 percent increase in the piston area, which allows the shock to do more work with lower internal pressures, less heat, and greater durability. These shocks come with external dual speed compression and rebound adjustments. The ability to quickly make adjustments as the load, riding style, and terrain change is key to staying in control. But the coolest feature of these shocks is their Bottom-Out Control (B.O.C) Technology. FOX’s B.O.C. technology provides extra resistance against harsh bottom-outs. As the Podium X shock is compressed, a secondary piston enters the bottom-out cup in the final 25 percent of travel to produce up to 3,000 pounds of additional damping force. This allows you to run a softer valve stack for the small stuff and still have the capability to take big hits. Once I made the decision to run the FOX 2.5 Podium-X shocks, I hooked up with the guys at Magnum Offroad so the shocks could be custom tuned for my application. Magnum Offroad has extensive experience with revalving the factory 2.0 FOX shocks on the RZR XP, so I knew they had all the measurements and test data needed to take the 2.5 shocks to the next level. Not only do they utilize a shock dyno to thoroughly understand and test shocks through their entire range of motion, but they also field test in the desert at Barstow to confirm. With the shock situation settled, I turned my attention to the rest of the suspension. The factory trailing arms, radius rods and front a-arms work fine in most conditions. But racing in the desert and rocks can take their toll when you hit a rock at race speed. Our goal was to keep stock geometry, but increase durability and ground clearance. On the rear suspension, you have a trailing arm and two radius rods on each side. The factory trailing arm hangs down lower than necessary, so I knew I could gain some ground clearance for rock crawling right at the leading edge of the rear tires. After doing a lot of research I settled on a set of Lone Star Racing STS Hi Clearance Rear Trailing Arms. The Lone Star trailing arms are made of 4130 chromoly so they are stronger but also save over 8 lbs off the weight of the stock trailing arms. But best of all is they are designed to have 2.5 more ground clearance just before the tire.

Next up were the radius rods that connect the trailing arm to the chassis. The stock radius are light duty and very susceptible to bending when rock crawling. Many companies make stronger radius rods, and several also make high-clearance versions. I decided on a set of Max Clearance Series Radius Bars from High Lifter. These bars are made from 1 ¼ x 3/16 DOM steel tubing so the material is much stronger than stock. High Lifter also used extreme curvatures to give much more ground clearance.

The stock front a-arms have a few problems for desert racing and rock crawling. The first issue is the strength of the lower arm. A fully exposed lower can easily bend if you hit a rock at any sort of speed. An a-arm guard can help protect the arm but for extreme situations, a heavy duty arm made of chromoly is best. The second situation is with the mounting of the upper arm. The arm is mounted to the frame with one long pivot tube and a mount tab at both ends. If your tire hits a rock at speed, the arm can be ripped right out of the front tab. The best solution is to increase the strength of how the arm attaches to the frame. First up, I grabbed a bolt-on front a-arm gusset kit from UTV Inc. This kit is easy insurance and does a good job, but I wanted a stronger arm as well.

After some research, I found just what I wanted from Cognito Motorsports. They have several RZR XPs and XP4s racing Best in the Desert and WORCS and I knew they would have the answer. The Cognito Motorsports kit includes new upper and lower arms with new factory installed heavy-duty spherical bearings. The upper arm incorporates a split pivot design which changes the OEM two shear point frame mounting, to a four shear point frame mounting, thus preventing the premature wear of the frame mounting holes. It require welding of two new mount tabs on each side, but the benefit far outweighs the extra work. The upper load-bearing control arm is boxed to provide the best and most economical strength to weight ratio.

Next on the to-do list was to increase the strength of the axles. Desert and rock racing are tough enough on axles, but we are seriously considering running with 30″ tires at King of the Hammers. Not only do the tires stress the drivetrain with a bigger rotating mass, but the larger diameter also adds more leverage which will find a weak spot. Since we are running stock width, there are more options available. We decided on a set of Outlaw DHT Axles from High Lifter. These axles feature heat treatments on the cages and housings to improve toughness against shock loads. The CV joint housings are larger to increase strength and the Housings, cages, and bars made from 4340 Chromoly steel. The boots are puncture resistant crafted from premium-grade TPE (Thermoplastic Polyester Elastomer) and the low-profile boot bands less likely to be knocked off during riding. Best of all, the come complete – end-to-end so you can remove and replace in a few minutes.

One last thing we decided to add for good measure is a heavy-duty tie rod kit from UTV Inc. These new rods are made of thicker aluminum and include stronger rod ends. Since we are running larger tires in the rocks, this upgrade is an extra bit of insurance against a bent or broken rod or rod-end.

After installing all of these products, we headed out to Prairie City SVRA to do a little bit of testing. Although Prairie City doesn’t have big whoops, it does have a good area to test high speed g-outs, rough terrain and jumps. We started with stock tires, then transitioned to 30-10R14 ITP Ultracross tires to see if we found any issues. I brought my buddy Paul Hart out to help with the driving. He is well experienced in short course, rock crawling and desert racing and I value his opinion.

We were both amazed at the ride quality of the Magnum Offroad tuned FOX 2.5 Podium-X shocks. The only way to describe it is we now have the plush ride of a Cadillac combined with the capabilities of a serious off-road race car. It floats over the chop and takes big hits jumps and g-outs as if you were landing on a pillow. Truly amazing! All of the arms and axles felt real solid, even after we swapped over to the 30″ ITP Ultra Cross tires.

Next up for our testing will be a run to the desert to see how it does in the whoops. Then we will be doing a full 30″ tire shoot out with tires from STI, GBC, Maxxis and ITP. Winner of the shootout may just be riding on the car for King of the Hammers. 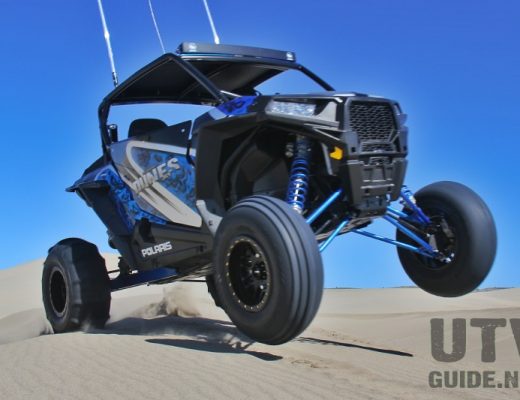