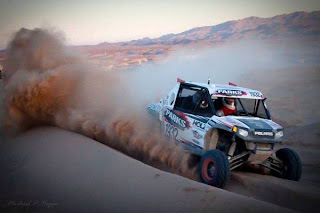 Parks wins race for second time in a row

Minneapolis, Oct. 20, 2011–For the second year in a row, Matt Parks took the checkered flag in his RANGER RZR 4 800, at the Best in the Desert’s Bluewater Grand Prix. Parks came into the two-day race seven points out of the BITD points lead and a win at Bluewater would help close the points gap.

The race consisted of racing three 25-mile laps both Saturday and Sunday with the cumulative time determining the finishing order. The race is unique as they start the side-by-sides every 30 seconds, in pairs, in a drag race to the first turn. To start out the day, Parks raced another RANGER RZR, got the hole shot and was quickly chasing dust from the two side-by-sides that started 30 seconds ahead of them. By race mile 3, he had caught both of the side-by-sides and by mile 4, was the second place UTV on course physically, but had to pass all of the Jeep Speeds and Baja bugs that started ahead of them. The only side-by-side Parks hadn’t passed was the Jagged X RANGER RZR XP 900 which had quite a lead on them and ended up winning the Saturday race by a minute-and-a-half with Parks in second.

Day two started the same way as day one with day one’s finishing order as the starting order. Parks and Jagged X would start side-by-side with Jagged X taking the hole shot. Jagged X and Parks were running one, two when they caught up to the first Jeep Speed. The Jeep Speed got out of the way, but didn’t realize that there were two side-by-sides behind them and they cut right in front of Parks after letting Jagged X by. After a few miles, Parks was eventually able to get by them. Coming into the hot pit, Parks was only 30 seconds behind Jagged X and by the end of the three-mile Parker Python infield section, they were within 20 seconds. They ran one, two for a few more miles until they got onto the river road and Parks was able to get by and try to make up a minute-and-a-half in a lap-and-a-half in order to take the win. They ended up winning on corrected time by making up the one minute thirty second deficit from day one.

‘We had a blast racing this unique two-day race,” said Parks. “We won this race last year which was the first race for my Holz built race RZR 4 nicknamed the Baja Bobsled. Winning it twice in a row makes it even sweeter.”

The final 2011 Best in the Desert race is the Transwest Ford Henderson 250, in Henderson, Nevada, on December 3rd.

About Polaris
With annual 2010 sales of $1.99 billion, Polaris designs, engineers, manufactures and markets off-road vehicles (ORVs), including all-terrain vehicles (ATVs) and the Polaris RANGER™, snowmobiles and Victory motorcycles for recreational and utility use and has recently introduced a new on-road electric powered neighborhood vehicle.

Polaris is a recognized leader in the snowmobile industry; and one of the largest manufacturers of ORVs in the world. Victory motorcycles established in 1998 and representing the first all-new American-made motorcycle from a major company in nearly 60 years, are rapidly making impressive in-roads into the cruiser and touring motorcycle marketplace. Polaris also enhances the riding experience with a complete line of Pure Polaris apparel, accessories and parts, available at Polaris dealerships.

Polaris Industries Inc. trades on the New York Stock Exchange under the symbol “PII,” and the Company is included in the S&P MidCap 400 stock price index.