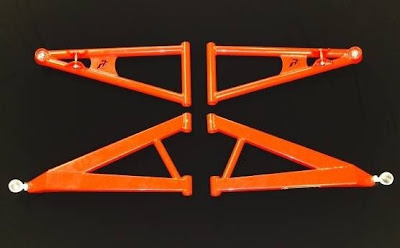 At Racer Tech we feel when you’re one of the first in the industry you don’t always have to be the first to release new products. The last year has seen many new companies arrive on the UTV scene only to fall on their faces with the release of new suspension kits and components. Many are copy-cats who don’t know what they’re duplicating. Others simply just don’t know how to build strength, performance and style into one fairly priced package. We strongly recommend looking to an established and reputable company when it comes to the one thing that keeps you and your UTV off the ground and going in a straight line towards the finish of the race or the trail. Racer Tech has been racing and building suspensions and chassis for UTV’s since 2006. All of our products and components are designed, tested and produced right here in the USA.
Racer Tech has been testing our new RZR XP Front Replacement arm kits for over a year now and we are finally ready to release this long anticipated product. With this kit, Racer Tech once again proves the two age-old antidotes true; you get what you pay for, and good things come to those who wait.

Racer Tech is a solid and proven name in UTV racing at this point. Our long travel systems for UTV’s have been proven to be virtually indestructible and hands down, the best handling kits on the market. Our designs come from years of real experience in off-road racing around the world in much larger and faster vehicles than most of our competition has ever even seen. The Racer Tech RXP Arm Kit is the most recent evidence of the constant evolution of our sport. It is also evidence Racer Tech will continue its involvement in pursuing the evolution of the UTV industry.
The Racer Tech RXP Arm Kit is a direct bolt-on replacement front arm kit which maintains the use of the OEM length shocks and axles while drastically improving the steering and handling characteristics. The 2012 RZR XP 900 came with improved geometry over the 2011 version. Our kit improves even further than the advances of the 2012. In an effort to minimize weight gains, we’ve developed a new process of manufacturing our lower A-arms. The result is a 100% boxed sheet metal arm with higher ground clearance and 35% less weight than equivalent previous designs. We’ve also found another way of substantially reducing the overall weight of the kit by building the upper arms with a simple, minimalist tubular design which results in a stylish and indestructible design which weighs almost the same as the OEM components. Even with the reduced weight, The Racer Tech RXP Arm Kit is just as strong as any of our previous designs and stronger than any other arm kit on the market for the RZR XP 900.
As always, we offer our industry-first lifetime guarantee on all arms.
All Racer Tech suspension systems eliminate the dangerously weak OEM ball joints with our proven FK Bearings JMX series chromoly heim joints. Don’t ever let someone tell you the OEM ball joints are just as strong! It is simply not true. For 2012, we’re releasing a second generation spindle adapter design which eliminates one of the previous components while increasing the cross sectional area of the most critical point of the adapter. It’s proven to be almost impossible to break our first generation adapters for over four years and thousands of miles of the hardest pounding off-road racing all over the world but we still invested and found a way to improve on the original design. Our new two-piece design is a simple design we are using on all of our suspension systems starting in 2012. The lower heim joint on the RXP Arm Kit is a massive 7/8” chromoly unit which affords the user unmatched strength but also easily adjustable camber settings to fine-tune the performance to their individual preference. The upper arm uses a new 1” diameter chromoly mono-ball design which increases the strength of the tubular upper arm design while it simplifies the initial setup for the end user.
We’ve waited to release this kit until we had time to build up a lot of them to put into our inventory so get them while they last! Red and Black in stock now!