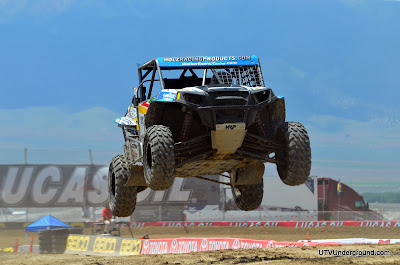 Riverside, CA 6/29/2011 – RJ Anderson and Walker Evans Racing continue in their quest for multiple championships at the TORC and Lucas Oil Off Road Racing Series’. First up was the TORC Series Rounds 3 &4 held in the famous Crandon Off Road Facility in Crandon, WI. Saturday’s Round 3 proved to be a challenge for RJ and team. Despite a very strong V8 RAM engine tuned by Kevin Kroyer, a solid drive-train by Gear Works, and well tuned Walker Evans Racing Shocks RJ was unable to get the Walker Evans Racing / Polaris Industries / South Point Hotel V8 Pro-Lite on the box. RJ never having run the Crandon course before came out swinging, qualifying 5th in position and at one point doing well over 90mph in his Pro-Lite, something he had never done before leading up to this race. Unfortunately come race time the #37 would arrive to the gate late forcing TORC officials to put the #37 on the last row. Despite the back row start RJ was already into 6th position by the first corner. It was there, the first corner of the first lap that the second place truck would lose control taking four trucks with him, RJ being one of them causing for a broken front coil carrier shock. RJ would limp his way around the track for a 12th place finish. Sunday would not allow for redemption as track conditions worsened with the weather causing TORC officials to call the round. Redemption would have to wait until the team arrived in Utah for rounds 7 & 8 of the Lucas Oil Off Road Racing Series (LOORRS).

Miller Motorsports Park in Tooele, UT played host to LOORRS for rounds 7 & 8 and despite its inviting, spacious, and very well maintained outside appearance the track inside proved to be a brutal battlefield for competitors of all classes. The clay based track began to harden unlike any other LOORRS track competitors have raced on causing for carnage in the field and long days & nights for crews in the pits. While other teams were taking their beatings RJ Anderson and his Unlimited UTV were taking checkered flags and forwardly solidifying his points lead in the class. With a big win in Saturdays Round 7 and a solid 3rd place finish on Sunday (Round 8) “Mr. Consistency” as he is known throughout the pits continued his championship quest battling back from an early season wreck that would have put most teams out of contention all together. Now RJ and his Walker Evans Racing / Polaris Industries RZR XP900 is clicking and have found their groove. Now equipped with a new Polaris power plant built by Kroyer Race Engines RJ and his Unlimited UTV look to be the favorite of many to win the championship in a sea of Kawasaki’s. When asked of his new found power and developing comfort with his 2011 Polaris RZR XP 900 UTV RJ Anderson had this to say:

“….it took me a little longer than expected to get to a point where I felt I could not only just compete but actually win again in UTV and the early season wreck at Firebird only set us back further. Last season we were down on power against the V-Twin’s we were running against but this year we have a little something for them to go along with some of the best suspension in the class. My Holz Racing Chassis, Walker Evans Wheels & Shocks, and our new Kroyer power plant has really made this Polaris RZR XP900 a ton of fun to race. I look forward to more win’s this year hopefully culminating in an Unlimited UTV Championship.”

While the story would end right there for most RJ still had another 2 classes he was competing in. Despite unforeseen mechanical and racing related challenges in his new V8 Pro-Lite he continued his consistent performance in the fan favorite Super-Lite Championship class. RJ Anderson without a doubt is a favorite to win a championship in his first full season competing in the Super-Lite class. RJ, the Walker Evans Racing team and Speed Technologies who host the series have worked really hard to put a solid truck under RJ each and every round leaving RJ to focus on what he does best, RACE! Saturday RJ was competing for the win but got caught in a battle for 2nd with a couple of competitors. RJ would hold strong and take the podium in 2nd place. Sunday would be more of the same except RJ would be racing in a back up truck that he had previously never driven or had prepped by his team. Despite the adversity RJ once again was able to put the #37 Walker Evans Racing / So Cal Super Trucks / Polaris Industries Super-Lite on the podium in 2nd place further solidifying his lead in the Super-Lite Class.

At Walker Evans Racing our goals is to design and manufacture quality, performance, race-proven products that can used for aftermarket applications. The very same product we produce is the very same product used on numerous race winning vehicles. Based in Riverside, CA Walker Evans Racing has been involved in the off road industry for over 30 years.