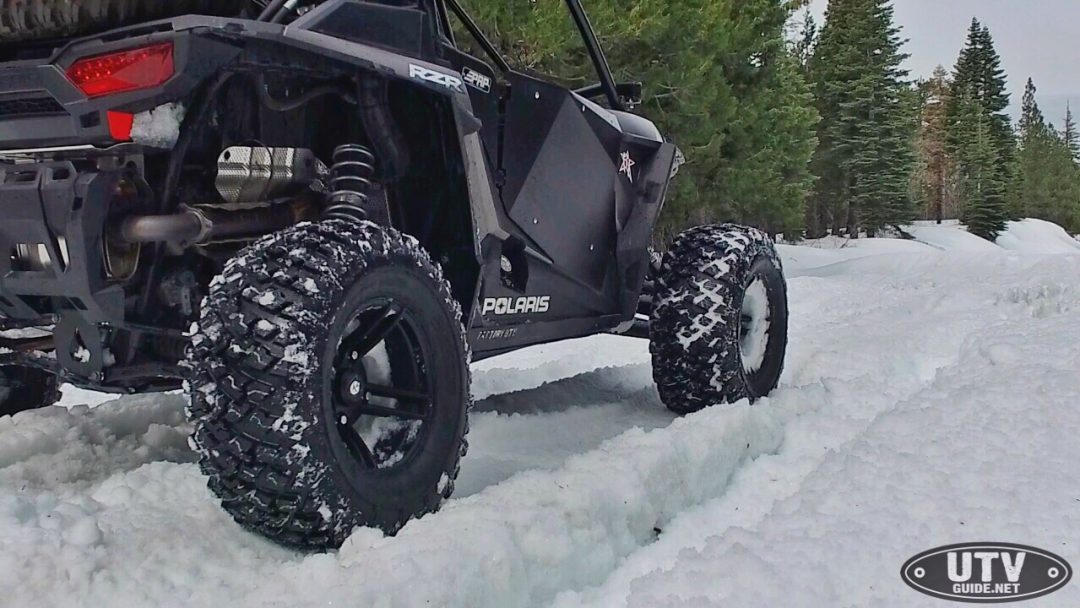 Since we are based in Northern California, winter typically means snow in the Sierra Nevada Mountains. Snow runs in UTVs are a bit different out here than many other places in the country because the snow can often be more wet and heavy (aka Sierra Cement). Spring temperatures can make this situation even worse, but playing in the snow and getting stuck is always a fun time.

We were offered the opportunity to test out a pre-production set of snow-specific tires made by Pro Armor called WhiteOut and jumped at the chance. The WhiteOut tire and wheel combination features an oversized bias, 2-ply tire with super soft side wall that can be operated at an ultra low tire pressure for a super wide 15” contact patch. The unique snow ready directional tread pattern grips the snow while the low-pressure design delivers superior flotation. This all sounded intriguing to me as I have been on many Sierra snow runs with normal tires, and spent many hours digging and winching. There are a few things that I have learned about playing in the snow with normal off-road tires: I received the test set of WhiteOut tires in mid-March.  The 30x15R15 tires are mounted on 15×10 Pro Armor wheels.

We have had temperatures in the 70’s in the Sacramento area for a week since the last snowfall, so I knew the conditions were less than ideal.  But I was anxious to try them out and didn’t want to risk a big “Pineapple Express” type storm coming through that melts much of the snow pack. Once I had the tires mounted up on our 2017 Polaris RZR XP Turbo, I just had to roll in outside for a picture. The RZR has a whole new attitude with these fat WhiteOut tires on!

I talked to my friend Rick from Placerville Polaris about doing a test run and he was game. We headed up to Pollock Pines, then up Mormon Immigrant Trail until we hit snow. This road goes uphill quickly so once you hit snow, it gets thick quick. We unloaded and headed into the snow.  Very quick we ran into a Jeep that was stuck and we offered a hand. Winching out Jeep CJ5 in the snow with our Polaris RZR

As you can see the snow is pretty rutted up and very slushy.  These guys had 25PSI in their tires and weren’t going anywhere.  I winched them back easily and then moved out of the way so they could turn around, then we were off.

The snow had been packed down with deep ruts in most places, but it was still soft and slushy.  If you stayed in the ruts, it reminded me of the Autopia ride at Disneyland as a kid. You have some ability to steer, but the ruts keep you from busting out unless you give it some effort.

I bailed out of the ruts at one point and over in the softer less packed snow.  I was going uphill and decided to slow down to see what would happen.  Well, the melting snow did not have enough support to keep the RZR on top and I got stuck.  I tried back-and-forth a few times and sunk even more. Rick stayed over in the ruts and passed me to give me something to winch to, then got himself stuck as he jumped out of the ruts. Now we were both stuck.  Thankfully, we were prepared with shovels and winches. Both stuck in the snow.

With the warm temperatures over the last week, the snow pack had lost a lot of its density.  Using the winch and some throttle, I climbed out of the hole and leapfrogged in front of Rick.  Then he used the winch on his HighLifter RZR to pull himself out.  One thing I noticed is his stock front Maxxis Bighorns really dug into the snow as he added throttle.  The RZR wasn’t able to pull itself out of the deep snow and was instead rototilling through it.  I moved forward and Rick tried again using very little throttle and mostly the winch and it finally popped up. We moved along up the road increasing in elevation. Snow up past Pellican Road was about 4 feet deep, but we both were able to move along easily if we stayed in the ruts.

Once we turned around, we swapped cars so we each could get a sense of what the other tires felt like in the same conditions. Getting a little sideways

Although we both got to our turn around if we stayed in the ruts, I felt much more confident outside of the ruts with the WhiteOut tires.  The stock Maxxis Bighorns are more aggressive and you could feel the tendency of the skinny front tires wanting to dig into the snow.  With more throttle this didn’t cause us a problem in these conditions, but I think the difference would become more apparent in fresh snow with little to no tracks.

Do the WhiteOut snow tires do as good as tracks? Certainly not.  I have a set of tracks (see Polaris RZR Tracks) and they are very capable. But tracks are very expensive and much harder to put on and take off of your RZR, especially if you aren’t leaving them on for the winter season like me. I also feel much better about running on pavement or dirt in the WhiteOut tires than I would with tracks. The other thing I don’t like about tracks is the mounting brackets are made for stock a-arms and trailing arms which doesn’t work as well for me.

While the snow for this run was certainly not ideal for this test, I think that I gained some good knowledge. I was running 5 PSI in the WhiteOut tires and felt like I could have dropped to 3 PSI for even more floatation if necessary. The 30x15R15 Whiteout snow tires definitely create more floatation than normal tires and this helps in the snow.I am looking forward to next winter’s snow so I can really spend some time with the Pro Armor WhiteOut tires.

The 30x15R15 Pro Armor WhiteOut tires won’t be available until sometime later this summer, and a retail price has not been set at this point. Pro Armor does have a 27x14R14 WhiteOut set available for smaller vehicles that retail for $1799.99 so I would expect that the 30x15R15 would be a bit more expensive. 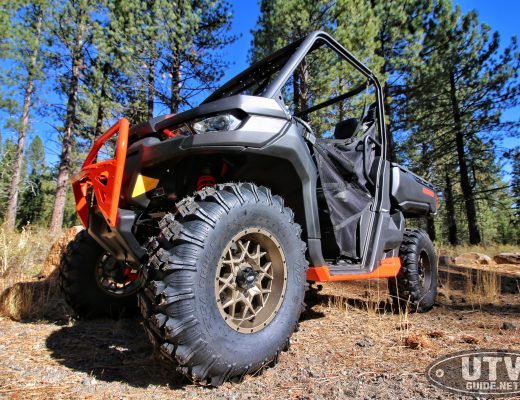