Bruce Scranton and Tommy Scranton are heading up the Pro Armor, WildCat Race Team! Over this past weekend they raced Round 1 of Monster Jam in front of a 60k sold out crowd at QualComm Stadium in San Diego, CA. We would like to give mad props to everyone racing Saturday night, we had a blast. Now if anyone caught the first 2 races they were great too! Great job to Pro Armor racer Tommy Scranton. He started in 7th in the 1st race. He passed most of the competition in the first 2 laps and on lap 3 he moved into first place which he held until the finish line! Big props to the Speedwerx clutch and Yoshimura exhaust improving power and control. The second race Tommy started on the front row and took the hole shot thanks to his GBC Tires and Douglas Sector wheels providing the traction. Tommy proceeded to check out in the 2nd race with a dominating win in his Pro Armor prepped WildCat. With the 3rd race approaching it was shaping up to be a solid night for Tommy and all of the racers. In the 3rd race we had the top runners from the previous races all on the front line; James Hill, Cody Rahders and Tommy Scranton. We were definitely in for a good race! Tommy again pulled the hole shot and led for a few laps before surrendering the lead to James Hill. It was a tight battled for first between Pro Armor’s Tommy Scranton and James Hill with IMG Motorsports. It was the Can-Am Maverick against the Arctic Cat Wildcat. Going into the final turn of the race with 1st place on the line Tommy set up for the inside turn while it looked like James was going to take the outside but at the last minute both racers found themselves going for the same exact spot in the turn and collided. This put James on his lid and left Tommy dropping another spot to Will Rogers and Cody Rahders and who inherited 1st and 2nd due to the mishap leaving Tommy with the final podium spot. It was a great night for the fans and racers at Monster Jam! Everyone had a great time and it was really good exposure for the sport of UTVs and racing. We are looking forward to Round 2 in Anaheim, CA in a couple weeks.

The Pro Armor/WildCat team will be at the first round of the WORCS race this weekend 1/26 and 1/27 in Peoria, AZ. If you are in the area be sure to come out and watch some great racing and feel free to stop by and check out our cars. 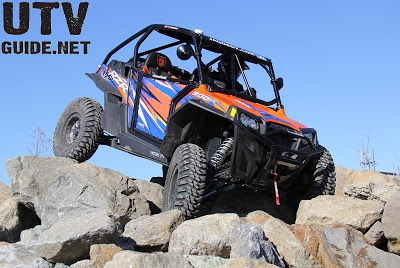