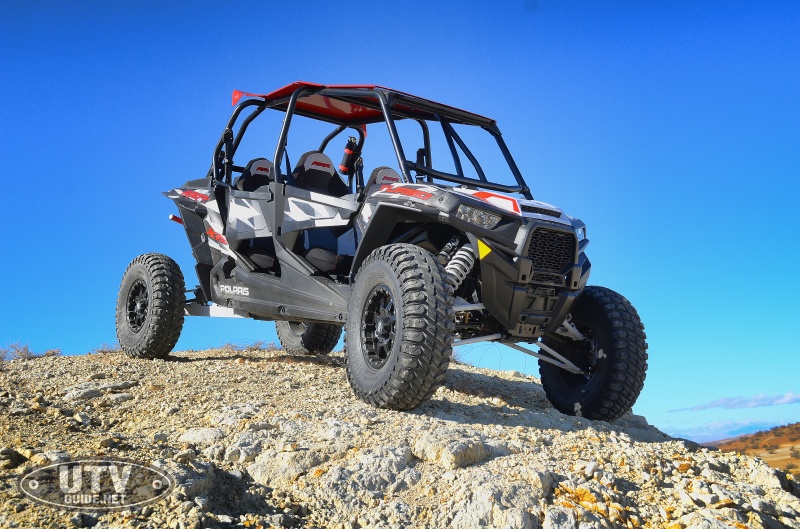 Now is a great time to be a UTV enthusiast. You could pick your choice of a new top-level sport UTV out of a hat and never have a disappointing day on the trail, regardless of the brand. However, there is one company that routinely gets it right, and at the risk of sounding like a broken record, we will just let this test do the talking. A few weeks back, we got the chance to drive the all-new Polaris RZR XP 4 Turbo in the sand haven of Glamis (see Polaris RZR XP 4 Turbo Sand Review). Knowing that not every UTV enthusiast can even get to Glamis, we decided to take it on another test voyage to see how it fares in harder grounds. With just 120 miles on the odometer, we bolted a set of new STI Chicane 32x10R15 tires (see 32-inch STI Chicane Review) to our otherwise stock unit, and headed for the vast, unforgiving California deserts of California City. We know how the stock turbo cars behave on the stock Maxxis Bighorn tires- we have driven thousands of miles on this chassis with them over the past couple of years. For this test, we knew that more traction would either make the new turbo powertrain shine, or show its weaknesses. The XP4 turbo is essentially an XP4 1000 with all of the various upgrades that come with the turbo car- a 144 horsepower, all-new 925cc engine, beefier transmission, clutches, driveline, axles, and massive brakes, as well as a front swaybar and FOX Internal Bypass shocks. For the extra $5,000 over the XP4 1000, you get a ready to run package that is much faster, better suspended, and more durable. We started our test off with a bit of slow-speed rock crawling to test the low-speed torque and driveline response. If you have any negative thoughts about the turbo cars throttle response, one drive in the XP4 Turbo will erase them like a hard night in Vegas. Low-speed clutch engagement is smooth and linear, allowing the driver to effortlessly control wheelspin and grip on slippery surfaces. That being said, its much more fun to just stab the throttle and let that turbocharged parallel twin sing.

While we shot these photos with just a driver in the car, all of the hard testing was done with a full load of adult passengers, ranging from 120 to 260 lbs. We rotated passengers and drivers often to get a more accurate depiction of how this big beast really felt to those in control and those holding on for dear life. Luckily, we only had one passenger request to be let out of the car, even with our heavy right foot.

The XP4 Turbo is a massive vehicle, and its definitely not going to squeeze onto tight wooded trails back east. For that market, Polaris also manufactures the thinner RZR S and RZR 4 S. The XP4 Turbo measures 146″ x 64″ x 73.75, which despite being fairly large for a UTV, is actually 8 inches shorter in length and 4 inches narrower than a Mazda Miata. Go figure. However, if you dont have 12.5 feet of room on your trailer, it wont fit. During our testing, we aimed to find as many types of terrain as possible, ranging from quartz rock quarries to sand, then back to silt beds, then to hardpack and light dirt trails. In every scenario, the XP4 Turbo accelerated with ferocity, cornered flat, and handled even the largest of drop-offs and big whoops with zero complaints. One of the downfalls of the desert area of California City is its tendency to carry many rain washes, and with the extensive hard rains that Southern California has encountered this year (relative to its normal dry climate), they ran aplenty during our testing. After scouting a few trails, we were able to hit some of these 4-foot drop offs at speed, even with four passengers- the key to getting over them well was a heaping dose of lead foot. We had four passengers rotate in and out of the car that had zero desert riding experience, and floating over these drop offs garnered gasps of terror from the back seat that were easily heard over the growl of the turbo twin. Cornering is one area where the 2 and 4 seat debate gets heated, and with the help of the STI Chicane tires, we can say that we actually experienced a scenario we dubbed too grippy. With the stock suspension untouched save for a 1 inch bump in front preload, the car exhibited a glued-to-the-trail feeling with 4 passengers that led us to switching the 4WD off. In 4 high, the car would handle in a very neutral manner, but the back end would not rotate unless pushed to the limit. In 2 high, we could rotate the car hard under heavy throttle, but still stick a line in a corner by backing off the skinny pedal a bit. It was a truly enlightening experience being able to drive the car hard in 2WD without feeling like we were losing speed due to wheel spin. In a nutshell, the car corners very well, but the addition of STIs Chicane tire really puts it over the top. Look for a full tire test soon! In the rough stuff, the XP4 Turbos new FOX Internal Bypass shocks really start to shine. Low-speed ride quality is a little stiffer than the Walker Evans-equipped XP4 1000, but altogether enjoyable nonetheless. At speed, the FOX shocks really stiffen up and control bottoming motions. Without touching the clickers, we were able to drive hard in some of the nastiest whoops, square-edged hits, and drop offs we could find. Tuning these shocks takes a little more time and effort than a shock without bypass zones, as the shock feel varies by ride height as well as impact speed. As the shocks compress, the piston passes bypass ports in the body that alter the flow of shock oil through the shocks internals. This allows FOX to make the shock ride softer when it is fully extended, slightly stiff at ride height, and then very stiff near full compression to prevent bottoming. Essentially, it allows the shock to modulate its stiffness depending on how close the car is to bottoming out. As this shock technology progresses, we expect to see magnetic ride control sometime in the near future, which allows the shocks to be tuned via an ECU to compensate for shock travel speeds in milliseconds, rather than tuned by where the shock is in its stroke. For a box-stock unit, you cant beat the terrain versatility and speed that the XP4 Turbo provides. Even when loaded down with people and cargo, the car accelerates with ferocity, featuring the best engine sound track of any Polaris UTV to date. Part V-twin growl, part parallel-twin scream, the 270-degree firing order of the new Turbo engine really pleases the ears. If we were to buy a UTV today as a dune and desert car, we couldnt think of a better way to get around. Having the ability to carry extra passengers or cargo definitely adds to the fun factor, and with this much power and suspension, we feel like an off-road racer every time we slide into the drivers seat.

The RZR XP 4 Turbo EPS retails for $27,499 U.S., and is offered in Graphite Crystal and Spectra Orange.

Engineered from the ground up with industry-leading durability, suspension, agility, and
performance, there are no tradeoffs or compromises when sharing the turbocharged thrill
ride in the all-new 144 HP RZR XP® 4 Turbo EPS. 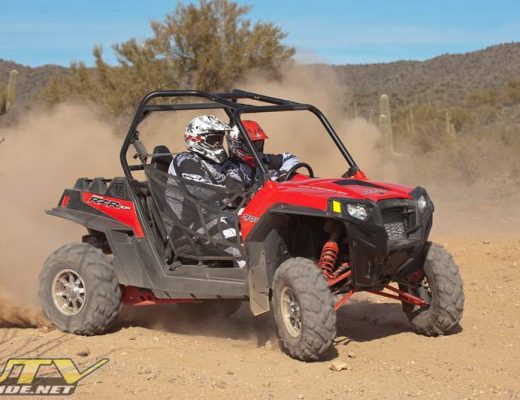