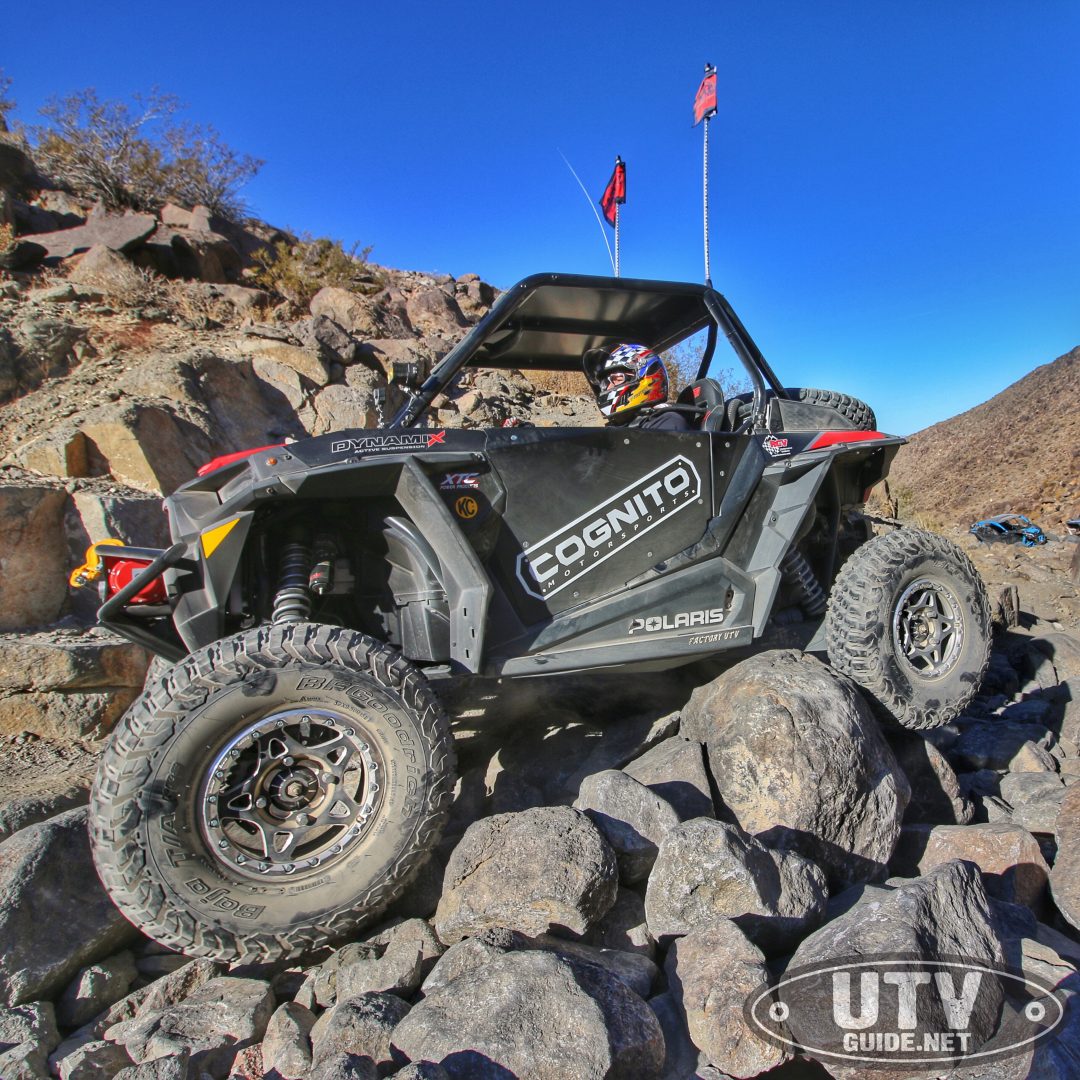 Since then, Polaris has bumped up the horsepower to 168HP and for 2018, the also introduced the 2018 Polaris RZR XP Turbo Dynamix Edition. Dynamix is the world’s first intelligent suspension system that adjusts on-the-fly to provide the best ride at every moment. The system includes sophisticated sensors continuously monitoring seven vehicle inputs to make adjustments – 200 times a second– to optimize the ride. Whether the vehicle is cornering, braking, accelerating, at speed or airborne, the system adjusts the suspension for the best response to the current driver inputs and terrain. These continuous changes give riders a more comfortable and more confident riding experience. For more details, check out our full review at: Polaris RZR XP Turbo Dynamix Review.

Well in addition to all the high tech stuff the Dynamix system can do for you while riding in the dunes and desert, the Dynamix also has an additional benefit in the rocks.

In addition to the real-time adjustments by the system, riders can adjust the suspension ride modes via a switch on the dashboard, choosing from three suspension settings:

I am sure it is an unintended “feature”, but if you select FIRM on the dash, the shocks are almost locked out and the RZR will actually raise up.  The result is an additional 2-inches of ground clearance!

If you have spent much time in the rocks, ground clearance is a key and the ability to raise the vehicle on-the-fly is kind of a big deal. Especially since you can drop it back down and hit the high speed desert with the touch of a button on the dash to COMFORT or SPORT mode. I have spent some time adding accessories to our 2018 Polaris RZR XP Turbo Dynamix Edition so that it can handle a race like King of the Hammers. Here is how I outfitted my Dynamix RZR: We spent several days playing at Johnson Valley and hit many of the trails that have been part of King of the Hammers UTV race over the years to put the Dynamix RZR through its paces. I ran the Dynamix RZR as if I was pre-running for the race and did not hold back.

I am very comfortable rock crawling in a RZR so the Dynamix felt right at home. I was concerned that the FIRM mode would make the RZR so stiff that I would really get beaten up, but I was surprised that this was not the case. FIRM mode did raise the vehicle as advertised and I feel like it definitely helped me get through some of the tougher obstacles. Other that the stiff ride, the other consequence running the rocks in FIRM mode is the shocks don’t move as much so it was almost like running with a stiffer sway bar. I did disconnect the front sway bar on Turkey Claw seen in the video below and that greatly helped front-end flex. Other than the additional ground clearance, one thing I did really like in FIRM mode was how the car did not blow through the stroke and bottom out when coming off a rock. The shocks held the RZR up nicely and save the car from extra beatings on many obstacles.

The biggest negative I have while rock crawling in a RZR XP Turbo is the low range gear ratio. While the gearing isn’t too bad while in “race mode” at King of the Hammers, it is too high for normal rock crawling. While I did not blow any CVT belts, there were several instances where I smelled it and had to adjust my approach speed to compensate.

I really wish Polaris would put the lower gearing in the turbo like they have in the Rock & Trail Edition RZR. I raced this car at King of the Hammers in 2017 and the low range is incredible (see 2017 King of the Hammers Race Recap). Low range is 55% lower than a stock RZR XP1000, but you can still hit 30MPH in low range.  This is how all RZR low range should be!

If I was going to race King of the Hammers in 2018, I would have a hard time deciding which RZR to go with. I really like the Rock & Trail Edition RZR for the low gearing, but also like the extra ground clearance and power (168HP vs 110 HP) in the RZR XP Turbo. My ideal car would be a blend of both! Hint Hint….