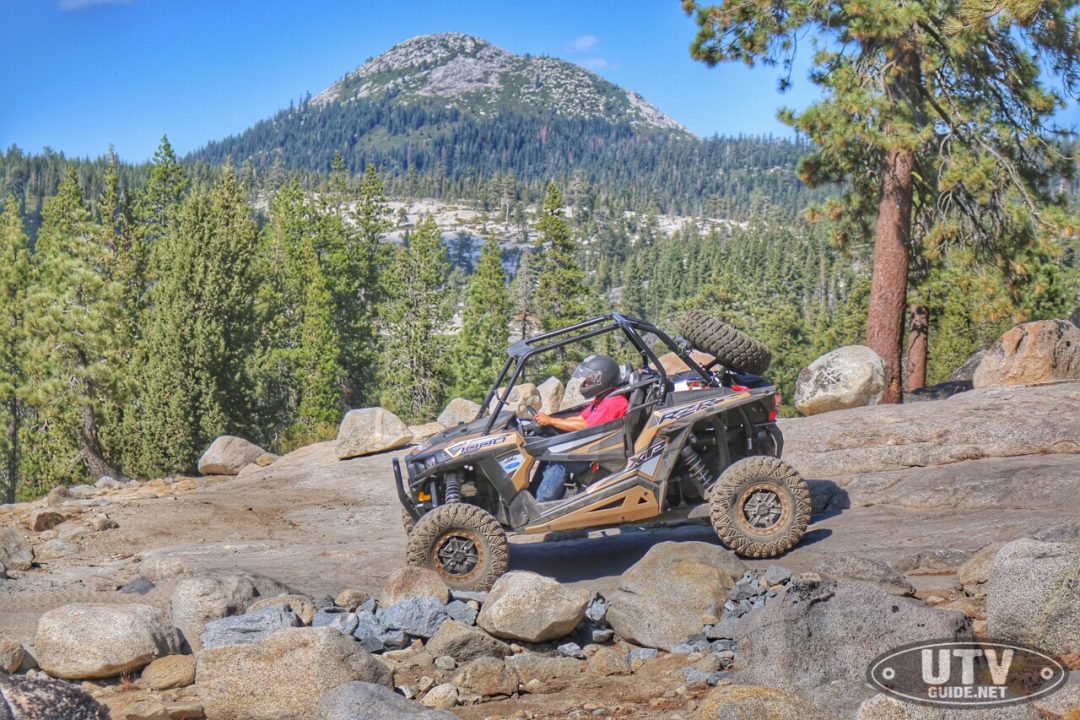 One of the hidden gems in the 2017 Polaris Model Year release (see Polaris 2017 Model Year Press Event) is a Limited Edition RZR XP 1000. When most people are focused on how much horsepower and suspension travel are on the turbo machines, I zeroed in on the Gold Matte Metallic LE Signature RZR XP 1000.

As an avid rock crawler, I have always lobbied for a lower gear ratio in low range and it appeared to me that Polaris not only listened, but crafted a special edition just for me.  I call it the #CrowleyEdition!

The 2017 Gold Matte Metallic LE Signature RZR XP 1000 is one of three special edition RZR XP 1000’s for 2017 and has “added capability to dominate trail and rocks.” Well that sounds great, but what is different? I got my name on the list for a demo unit and it showed up at Placerville Polaris in late September. First thing I did after getting it home was check out low range.  It definitely had more grunt and control at slower
speeds, and I could do about 30MPH on the top end!

Running up Little Sluice on the Rubicon Trail

We took off with a group of 4 RZRs and headed into the trail. Taking a new UTVs onto the Rubicon is always a treat because the car is tight and fresh.  I don’t care what brand is your favorite, let me have it for a few months and you will hear various creaks, rattles and knocks when you are flexing in the rocks. But this brand new RZR was tight and the Walker Evans Shocks were providing for a plush ride. The low range gear ratio put a big smile on my face. Definitely lower and the different ECU tune felt very smooth. I normally drive in the rocks with two feet.  One on the brake and the other on the gas.  This gives
me better control.  Strange thing is I found myself driving mostly with just my right foot on the gas.  Low range had more slow speed control so I wasn’t rolling on/off rocks as much.

Once at the fork in the trail where Wentworth Springs comes in, I opened it up to see how it felt going fast in low range.  I was able to easily hit 25MPH consistently and topped out at about 30MPH.  I want low range
for low speed control not to go 40MPH, so In my opinion that is perfect. Shocks soaked up the rough terrain very well and made for a comfortable ride. The 30-inch Pro Armor Crawler XG Tires gave us some added ground clearance and have a great tread pattern for rocky terrain.  The Beadlock wheels have nearly a zero offset and this helps keep the width at a
stock 64-inch wide. I like how this offset maintains a proper steering geometry for the XP 1000, but the lug nuts aren’t very protected.  At the end of the trip I had scuffed sever of them on rocks since they stick out about the same width as the tire.  This isn’t a big deal at all, unless you are doing more extreme rock crawling and clip a rock hard. I could imagine it might cause some stud damage, but I have nothing more
than speculation to back that up. The high clearance a-arms and radius links are a huge improvement over stock for rock crawling. A normal RZR XP 1000 would easily end up with a bent radius link (see RZR XP 1000 Rock Crawling Review) and it is also very easy to ding the normal straight a-arms as well. These high clearance arms and links give you much more clearance as you can see in the image above. This special edition RZR also comes with a full HMW skid plate.  It covers the entire underside and is about 1/4″ to 3/8-inch thick. Strong, durable, lightweight HMW (high-molecular weight) polyethylene construction withstands off-road impacts better than standard skids and unlike aluminum, can take a hit and not bend. This unit comes with Polaris Aluminum Rock Sliders (Polaris part #2879498-458). These look good and will do well for light duty rock crawling, but can easily dent after a hard hit.  I’d prefer something made out of HMW that can take a hit and not bend. Unlike the RZR XP Turbo, the RZR XP 1000 does not have a front sway bar. As you can see from the picture above, this translates into more articulation.  This is great for rock crawling.  We will have to see how we like the sway control in the desert. During the trip, our friend ending up with a bent tie-rod on his XP 900. We busted out the 4500lbs. Polaris winch and used it to “jack” one side of his RZR in the air so repairs could be made. Winch worked perfect and I liked how there is a loop on the bumper to click the hook onto for storage. The Gated Shifter that comes on this special edition is a big help. Real easy to change from Reverse to High and avoid Park.  For optimal rock crawling in race conditions, R-N-H-L would be ideal, but this is a big help nonetheless. Click 6 Harnesses are new for Polaris.  I had them on my FOX Edition RZR XP 1000.  They are a bit strange at first, but after a while you get used to them.  Definitely easier to used than aftermarket 5-point harnesses and offer much more protection than standard 3-point automotive style seat belts. The upper part of the belts allow movement so you can see better while rock crawling, but lock in place with any sudden movement. Overall I am thrilled with the performance of the #CrowleyEdition RZR XP 1000.  Low range is spot on.  I hope Polaris and other manufacturers look at a lower low range gear ratio for more sport UTVs. For my style of riding out west, I like to not only rock crawl, but also hit the dunes and desert.  A RZR XP Turbo makes a great rock crawler (see RZR XP Turbo Rock Crawling Review) and I would really like to try one out with a low range like this. If you don’t need all the power that a turbo gives, this unit is perfectly well suited for rocks, trails and everything else. The only things I would change to make a perfect #CrowleyEdition would be replacing the aluminum rock sliders with a more durable material, and I would add a roof. But without a doubt, this is the best off-the-showroom floor rock crawler I have ever tested!

I had so much fun in this #CrowleyEdition RZR XP 1000 that I have decided to race it at King of the Hammers in February.  While it cannot beat a turbo UTV in the desert, it is a very capable car and we plan to do minimal changes to it to increase durability and add required safety gear. Stand by to follow our race prep, testing and the race! 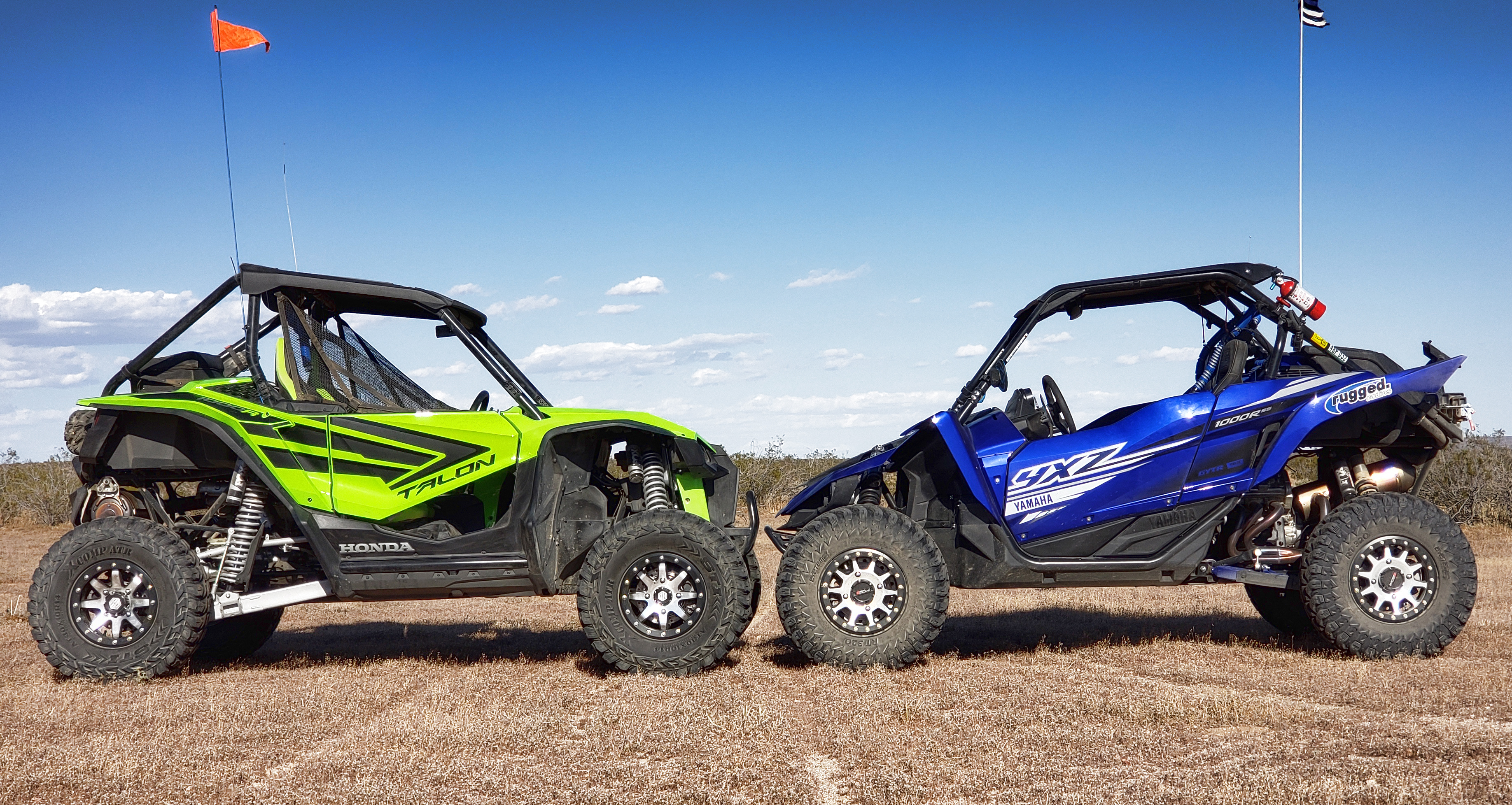