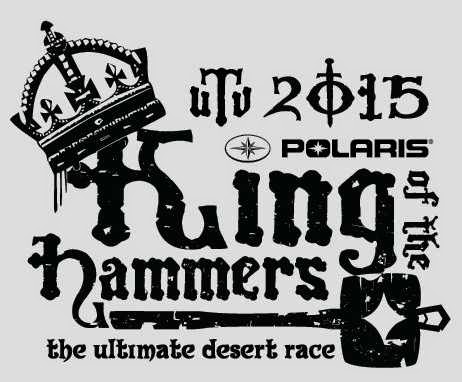 Minneapolis, December 30, 2014- The King of the Hammers (KOH) is known as the toughest off-road race in the world, and this year, the person who conquers the course will not only go home with “The Hammer,” but also a brand-new, 2015 RZR XP 1000 EPS.

As part of Polaris RZR being the official side-by-side of the race, Polaris sweetened the deal by offering up a RZR XP 1000 EPS to the Pro Class side-by-side winner. Last year, 26 side-by-sides would vie for “The Hammer” with five-time Hammers Winner Mitch Guthrie winning in his RZR XP 1000 EPS (read more at: 2014 King of the Hammers UTV Race Coverage).

“A majority of King of the Hammers’ Pro racers choose to race RZR,” said Jason DiFuccia, director of Marketing for Polaris Off-Road Vehicles. “So we figured they’d like a new RZR XP 1000 for winning. We look forward to presenting the 2015 Pro SxS winner with the keys.”

The 2015 King of the Hammers UTV race will take place on Friday, February 4, at Means Dry Lake, in Landers, Calif. More information can be found at http://ultra4racing.com/category/king_of_the_hammers/

Since the introduction of the RZR 800 for Model Year 2008, Polaris has defined and led the recreational side-by-side market. Since that first launch, the company has consistently introduced models with unmatched performance which are highly sought after by off-road enthusiasts. RZR side-by-sides are the gold standard in recreational vehicles due to their ultimate combination of power, suspension and agility for trail, high performance and multi-passenger recreation. In 2014, Polaris announces the launch of a RZR beyond compare, the RZR XP 1000.

The new RZR XP 1000 brings significant innovations to each of the hallmark Power, Suspension and Agility aspects of RZR. PLUS, the RZR XP 1000 adds an entirely new level of interior comfort and accessory customization to give riders the premium features they deserve.

Specifically built for the pinnacle of extreme performance, an all-new Polaris ProStar™ 1000 engine provides an industry-leading 110 horsepower with a true 999ccs of displacement, making it the most powerful and largest engine in its class.

Past King of the Hammers Coverage: