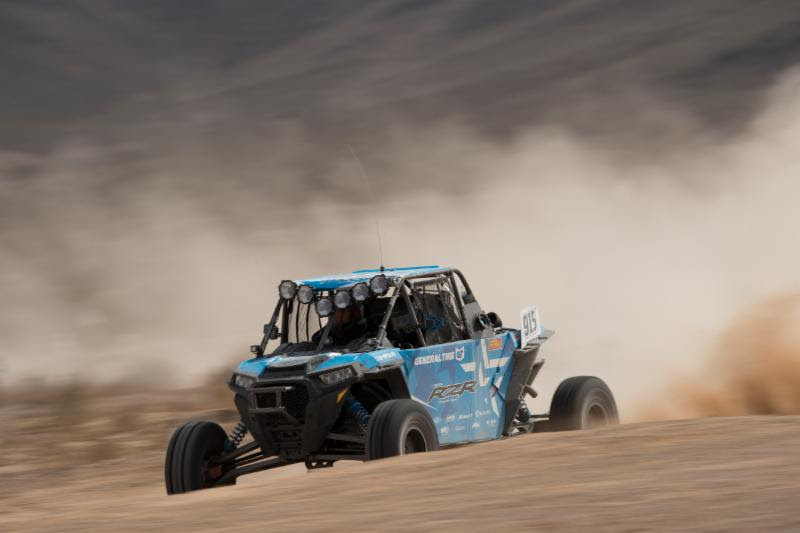 For Foust, racing the Polaris RZR in the Mint 400 was the realization of a longtime dream.

“The scene here in Las Vegas is wild. It’s so amazing to see the fans crowded around the trucks and UTVs as they parade through Fremont Street before the race,” said Foust. “The Mint 400 has been on my bucket list for years and I’m thankful that Polaris gave me the opportunity to compete.” It was an early start at The Mint 400 for the Polaris RZR Star Car, with all three team members arriving at the main service pit in the pre-dawn hours for the start, just after6 a.m. A record number of over 100 side-by-side and UTV vehicles entered the race this year.

Beaver took the first driving stint in the nearly 400-mile race, with Van Vugt in the co-driver’s seat of the brand new 2017 Polaris RZR XP4 Turbo to get a feel for the course ahead of her final-lap drive. Foust swapped into the RZR Star Car for the second 2.5-hour lap.

When he got behind the wheel just before 9 a.m., it was Foust’s first time driving the machine. “I love the fact the PolarisRZR is not just a super capable recreation machine,” he said. “With a few modifications it can literally take on some of the harshest off-road racing environments in the world.”

Conditions were ideal for racing in the rugged desert terrain near the California-Nevada state line, with cool, clear skies and a gentle wind keeping the dust down. For Van Vugt, who originally grew up in Canada, it was all new.

“The terrain goes from massive boulders and rocks all over the place to deep, silty berms. I’ve never seen anything like it,” she said. And even though it was her first time at the Polaris RZR Mint 400, she said she felt right at home. “I grew up at moto tracks and if you’re like me, growing up in the pits, you’re going to find you have a sense of ease with the off-road community right away.”

After a strong opening lap with longtime off-road racer Beaver at the helm, Foust and team co-driver Bryant Shontz picked up the pace and brought the RZR Star Car into the Top 10 in Lap 2. Rookie off-road racer Van Vugt took over driving duties for the final lap and, with Beaver coaching from the right seat, the team was on pace for a very strong finish.

But with just 20 miles remaining in the race, in a tough, high-speed section of large whoops, they put a wheel wrong and crashed. Van Vugt and Beaver were unharmed and able to make a roadside repair to fix the damage well enough to continue at a cautious pace. But, ultimately, they were forced to stop short of the finish line when the much faster and larger Trick Trucks began to catch them as the sun went down.

“We really wanted to finish our first race in the Polaris RZR Star Car,” said Beaver. “But the Trick Trucks are charging hard and the track gets very tight in the final mile where the spectator course is. We were so close we could see the finish line, but we had to make the tough call. That’s desert racing sometimes. We’ll get them next year.”

The Mint 400 festivities began Wednesday with a kick-off parade, race truck qualifyingThursday, and the popular contingency procession down Las Vegas’ famous Fremont Street on Friday. Foust, Van Vugt, and Beaver signed autographs and took photos with the thousands of fans that turned up to get a close look at the nearly 400 vehicles entered in this year’s race.

Foust, Van Vugt and Beaver were not the only celebrities in the Saturday race. Car buff and TV star Jay Leno, television personality Jessi Combs, and the Diesel Brothers crew were among the entrants at this year’s Mint 400. Robin Leach, a Las Vegas resident who is perhaps best known for his decade-plus tenure as the host of Lifestyles of the Rich and Famous, served as Grand Marshal for the event.

Guest star drivers for each round will be announced in the days leading up to the events.

The team’s participation in the four select Best in the Desert races will be documented in a series of online videos released throughout the season. Follow the Polaris RZRStar Car this season on Facebook, Instagram and Twitter at @PolarisRZR, and by using the hashtag #RZRStarCar and #RZRLife. Find Jim Beaver’s Down & Dirty Radio Show online at www.downanddirtyshow.com and through all podcasting channels.