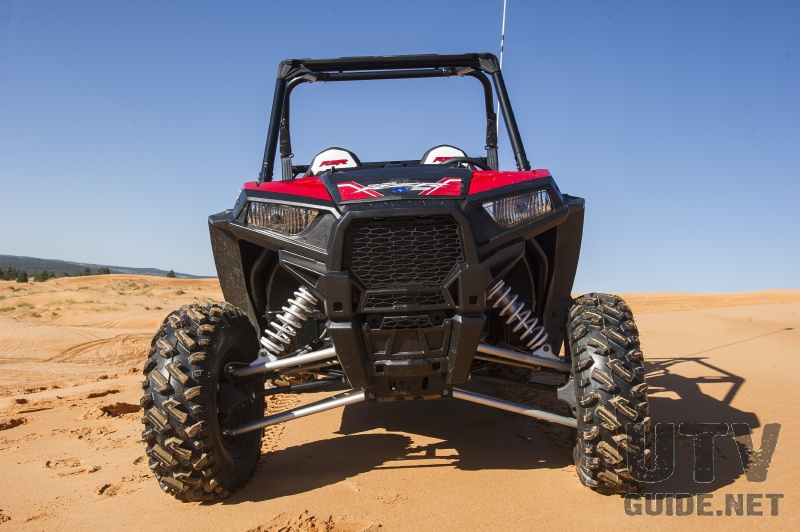 I  joined Polaris for a two day ride in Utah recently where we put the new RZR S 900 through its paces in the dunes, on the trail and in the rocks.  Before we got to get behind the seat of the new RZR S 900, Polaris gave us a thorough overview of the 2015 lineup. The Polaris RZR S was introduced in 2009 and set the sport UTV world on fire. Since then, Polaris has sold thousands of RZRs and made many improvements to the sport lineup, with just minimal changes to the RZR S. Even though the RZR XP 900 and RZR XP 1000 surpassed the RZR S 800 with more power and bigger suspension, the RZR S 800 was still very popular with trail riders that wanted a smaller vehicle and a smaller hit on the checkbook.

With Polaris making a big push to use ProStar engines in all of their lineup, it was time to freshen up the RZR S.  But it typical Polaris style, dropping a ProStar 900 engine into the same RZR S chassis just wouldn’t cut it.  Instead they created an all-new RZR S 900 from the ground up starting with a ultra-rigid, tubular chassis. The 2015 RZR S 900 surpasses the RZR S 800 with more power, better suspension, improved ergonomics, and upgraded styling. On the second day, we rode at Hog Canyon to experience a little bit different terrain. Hog Canyon is managed by the Bureau of Land Management and has a designated route system that was officially established in 2005. It offers approximately 30 miles of routes ranging from easy to extremely difficult. Everything from desert washes to rocky hill climbs. After spending two days with the new Polaris RZR S 900 and a little bit of seat time in the RZR S 800, I was very happy with the new RZR S 900 on almost every levels.

Although some people complain that the RZR XP 900 came with 88 HP, this engine was developed by Polaris specifically for the RZR S 900. At the heart of the RZR S 900 is a 75 horsepower ProStar® 900 engine offering improved power-to-weight ratio and faster acceleration. The new ProStar power plants offer more than 40 percent more horsepower and 15 percent more torque than the previous RZR 800 models. You have to remember that the RZR S 900 is a replacement for the RZR S 800, and not the RZR XP 900. If you keep that in mind, the power, torque and delivery is far superior.

The new ProStar engine has excellent fuel economy and runs on 87 octane. It is also easier to maintain because key access points were planned with the vehicle during design and development. The cab of the RZR S 900 is much the same as the RZR XP 1000. The new seats with more cushion and improved bolstering. Driver’s seat is adjustable and the cab features an extra 1″ of legroom. Dead pedals for both the driver and passenger make for a more secure ride.

The RZR S 900 also features a new, stiffer steering wheel designed for comfort and a more responsive feel. It also had a 20 percent faster steering response. With an improved two-turn, lock-to-lock steering ratio, its easy to keep your hands on the steering wheel while navigating around any obstacle or hairpin turn encountered on the trail.

The units also feature LED floor lighting and a back-lighted instrument cluster, which makes it more readable both in direct sunlight and at night.

The RZR S 900 borrow new styling from the RZR XP 1000 family and in fact, much of the plastic and cab are identical forward of the b-pillar.

The vehicles also feature factory-installed quarter doors for extra protection from debris, and easier ingress and egress.  These doors not only look much better than the old nets, but they are simple to operate. Overall, I am thrilled with the new 2015 RZR S 900. It is a very capable and comfortable trail machine. The only downsides to the new unit are added weight (but in return a stronger chassis) and higher low range gear. Most users will appreciate that low range is now capable of 40 MPH, but as a rock crawler, I want a low range that tops out at maybe 20 MPH so you can be more precise while maneuvering over tough rock obstacles. I will spend more time rock crawling with the RZR S 900 in the coming weeks and will report back  if the taller gearing is an issue for us rock crawlers or not. 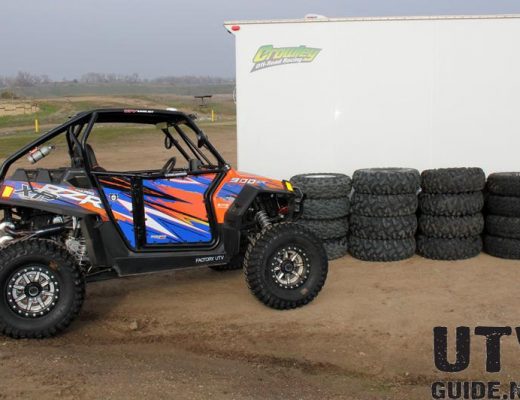