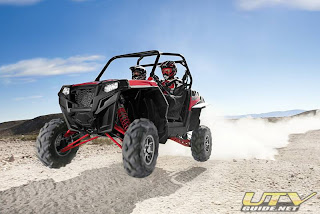 New Year’s 2011 started off with a bang as Polaris introduced the newest member of the RZR family. The 2011 RZR XP 900 features a brand new engine designed specifically for side x side – ProStar™ 900 DOHC Twin EFI Engine. And 88 horsepower wasn’t enough so Polaris designed a completely new rear suspension with the industry’s first 3-Link Trailing Arm IRS that has 14″ of Suspension Travel. There is no doubt that the RZR XP has raised the bar for the sport UTV market segment. Industry leading horsepower coupled with an advanced suspension is sure to be a big hit in the dunes and desert. After you take a look at a few key components of the RZR XP and compare them to other sport UTVs, you will see there are some key advantages to this new sport UTV.

When it comes to wheel travel, the RZR XP has 13.5 inches in the front and 14 inches in the rear. The only other UTV that even comes close is the Polaris RZR S. The Can-Am Commander and Arctic Cat Prowler have 10″, and the Rhino and Teryx have less than 8″. Add to amount of wheel travel that the RZR XP comes with Fox Podium X 2.0 shocks that have a 2-inch body with piggyback reservoirs. These Fox shocks also provide adjustable pre-load and compression dampening. 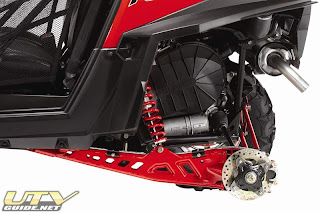 Even more exciting than the amount of wheel travel is the advanced, 3-Link Trailing Arm IRS. The two extra-long radius rods connect far-forward under the seats for superior handling in rough terrain, especially at high speeds. 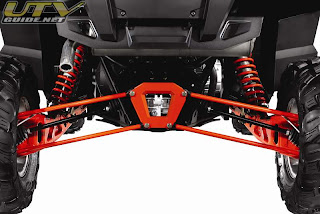 When you look at performance through rough terrain, short-wheelbase UTV have a hard time going as fast as their engine will push them. This is one of the reasons that the RZR 4 does so much better right out of the box. But when we look at the Can-Am Commander, Kawasaki Teryx, Yamaha Rhino and Arctic Cat Prowler, they all have a wheelbase between 75″ – 76″. 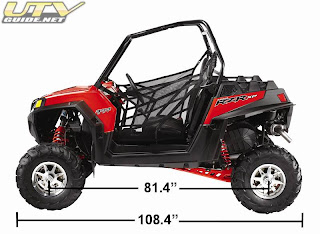 The new RZR XP has a wheelbase of 81.4″. That extra 4+ inches will make a big difference when you are trying to fly through the whoops at 60 mph. What makes the long wheel base on the RZR XP even more impressive is the RZR XP has an overall vehicle length that is actually 7″ – 10″ shorter other sport UTVs. Let me make sure you got that – longer wheelbase AND shorter overall. 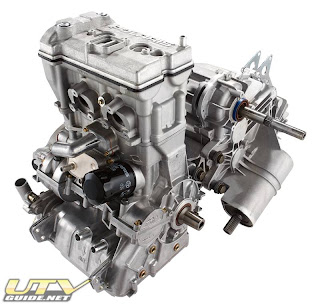 Following along with all of its RZR cousins, the Polaris has placed the engine in the RZR XP behind the seats. This patented engine placement allows for driver and passenger to sit much lower in the chassis which lowers the center of gravity. A lower center of gravity allows the RZR XP to act more like sports car than a truck.

It is hard to compare the width of the RZR XP to anything other than the RZR S since none of the other manufacturer’s UTVs come with long travel suspension. More width adds to stability when cornering or while rock crawling. The RZR XP is 64″ wide. That is 4″ wider than the RZR S and 9+ inches wider than a Yamaha Rhino. 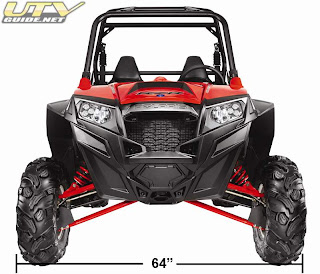 The downside to the extra width of the RZR XP is its ability to get onto some of the narrow forest service trails. It is pretty obvious that Polaris intends to market the 50″ RZR for that and focus on the open desert and dunes for the RZR XP.