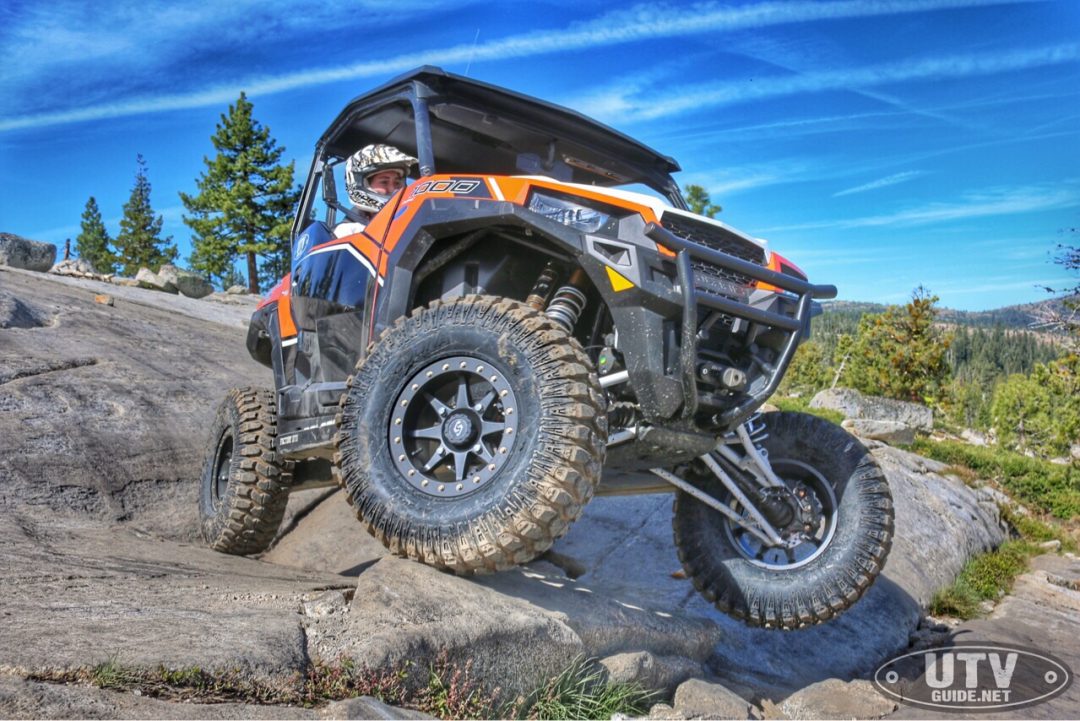 Polaris introduced the GENERAL last Fall, and I was very impressed with the vehicle after driving it at the press intro in New Mexico (see Polaris GENERAL Review). The rec-utility category is new for Polaris, and the GENERAL slots in between utility-rec (RANGER) and Sport (RZR).

The GENERAL is a blend of RZR S 1000 and Ranger XP 900. Don’t let the dump bed fool you, the suspension and drive train are almost pure RZR S. With a 100 horsepower ProStar engine, the Polaris GENERAL has best-in-class power. And the suspension boasts 12-inches of ground clearance, plus 12.25-inches of front wheel travel and 13.2-inches of rear wheel travel from an a-arm suspension that is nearly identical to the RZR S 1000. Engine and clutch are almost all RZR S as well with minor tweaks to the calibration and tuning so the GENERAL can have the low-end grunt necessary to do work.

Our first trip was out to Sand Mountain to test it in the dunes with a set of paddle tires on it. We sere super impressed with the power and knew that the GENERAL was going to be a super flexible vehicle.

After the dunes, we worked with FOX and Shock Therapy on a set of 2.5″ FOX RC2 shocks and the GENERAL started to feel even more sporty.

Then we set our eyes on doing some rock crawling with the GENERAL. First thing we wanted to do is protect the underside of the car, so we got a 3/8″ UHMW skid plate from Factory UTV. Then we knew that gaining some ground clearance would be critical so we connected up with Racer Tech to try their 1 1/2″ – 2″ RZR S lift. This for the most part fit and not only got the belly off the ground, but also gave us room to fit a set of 30-inch tires which gave us even more ground clearance. With our belly protected and off the ground we were ready to hit the rocks.  We decided on a day trip on the Rubicon for Memorial Day.

Power Delivery – The changes we made to the GENERAL were just enough to make it very capable. The GENERAL has smooth power delivery in low range and the stock clutch seemed to handle the larger sized tires no problem.

Polaris GENERAL on the Rubicon Trail

Wheelbase – The wheelbase on the GENERAL checks in at 81-inches.  Two inches longer than the RZR S 1000 and 9-inches shorter than the RZR XP 1000. This length makes the GENERAL very nimble with a tight turning radius that excels on the Rubicon.

AWD and Front Diff Lock – Like all other Polaris products, the GENERAL comes with an automatic AWD system. The front wheels engage only when necessary. There is no switch to engage and no waiting for pressure to build before power is transferred.   While this sounds like it might not always work the way you want it to, I have never had a Polaris let me down in the rocks. Power is nearly instantaneous and automatic and you don’t have to think about it or stop to engage.

Sway Bars – The GENERAL comes with front and rear sway bars, and they do what they are supposed to do, control body roll. So much so that we found ourselves lifting a front wheel all the time. They just aren’t setup for rock crawling, and I think the next time I hit the Rubicon I will try it with them removed. That being said, we did get everywhere with the sway bars connected. I just think we would get better performance if the suspension was allowed to flex more and allow the tires to stay on the ground more of the time.

Polaris GENERAL on the Granite Slabs

After the Rubicon, we used our GENERAL as the test mule on our new 30-inch tire test at Prairie City SVRA. One of our tests was rock crawling and we put the GENERAL through 5 different rock crawling tests with seven different sets of tires.

Once again, the GENERAL performed well but further illustrated the sway bar interference with suspension flex. The only other complaint we had was our elbow hit the door quite often while bouncing around. Not a huge issue for casual rock crawling, but after a days worth of bouncing we had a few sore elbows amongst our testers. Overall, I am very pleased with the performance of the GENERAL in the Rocks. While it doesn’t do as well as a RZR XP 1000, it is still very capable. In stock trim, we could have done most of what we did on the Rubicon, but we would have been riding on the skid plate quite a bit more.  The changes I made to protect the underside and gain some ground clearance were just enough to make the GENERAL a well equipped rock crawler.  With the nice sized bed, the GENERAL can easily hold enough camping equipment to spend a few days on the trail and I intend to do that sometime this summer!

I am very pleased that Polaris decided to utilize the suspension from the RZR S.  Smart move to build on a proven platform, and enthusiasts benefit from an aftermarket that already has parts available.

Polaris continues to churn out new models that are solid vehicles in their respective market segments. I can easily see a four-seat GENERAL on the horizon. 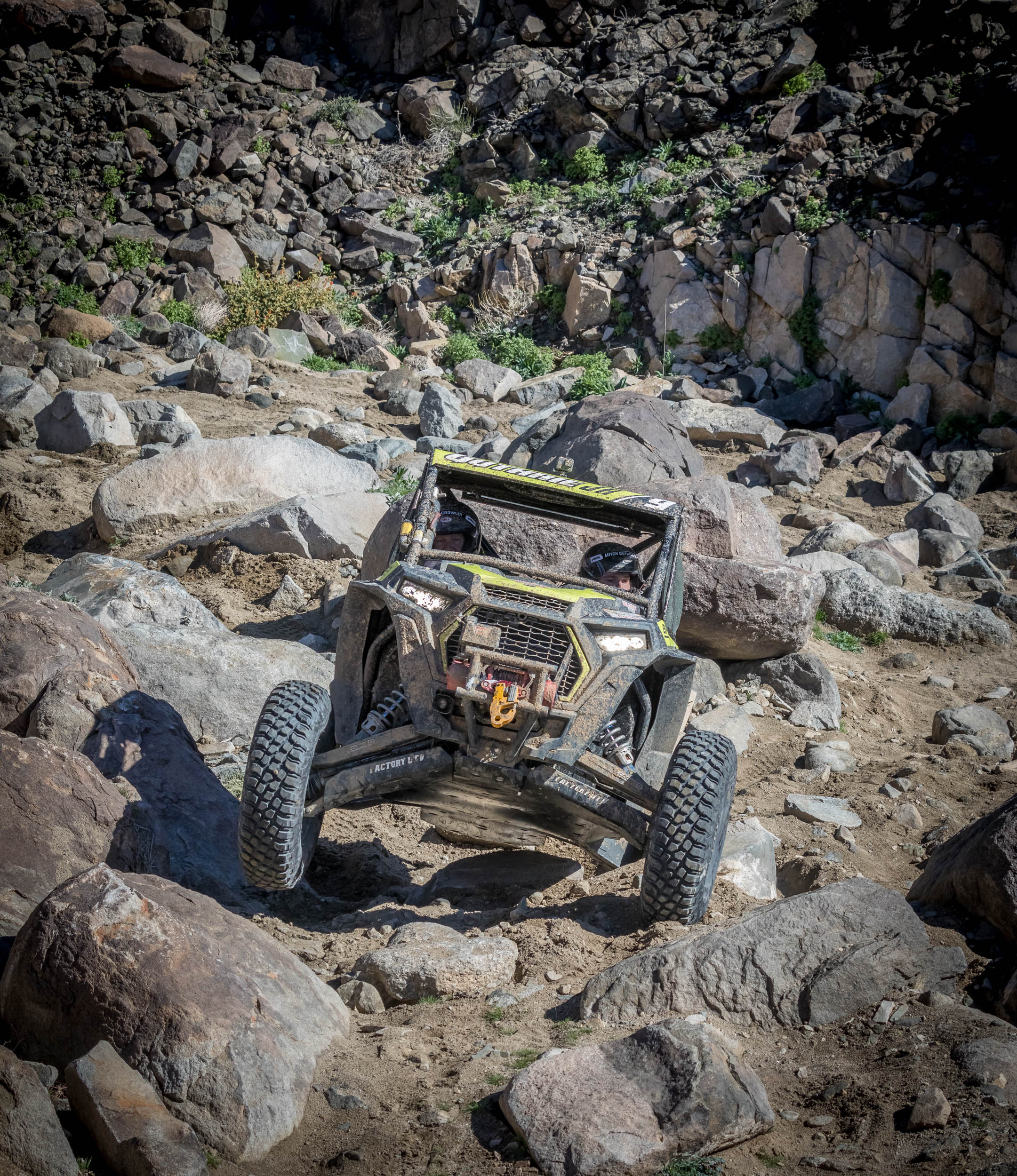