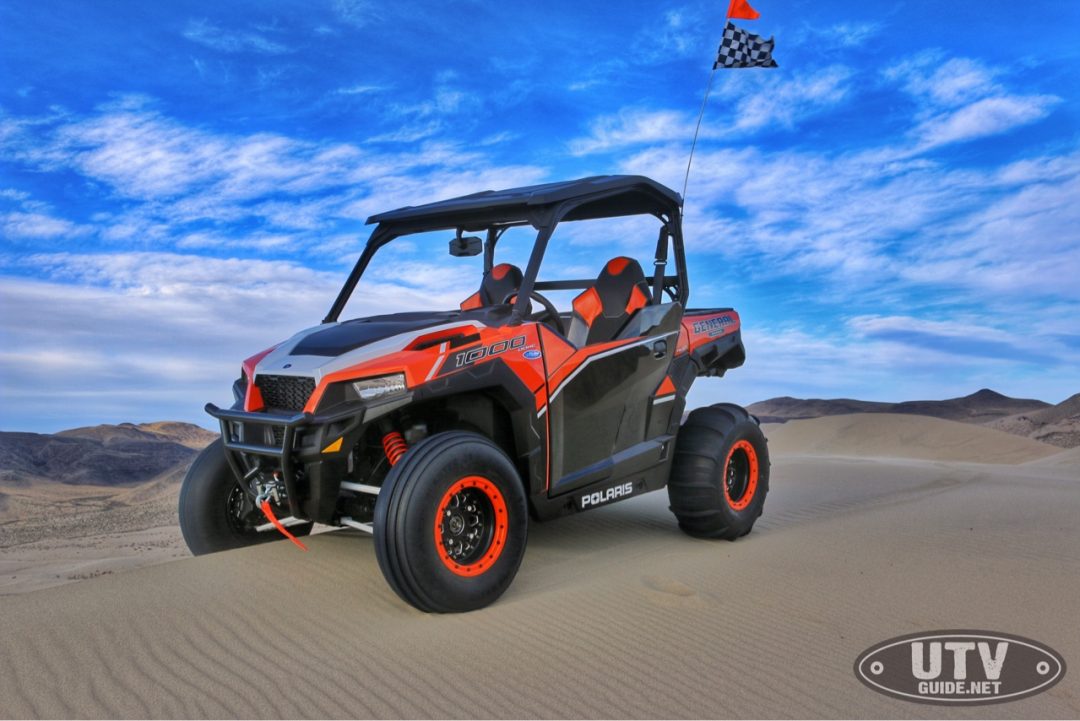 Polaris introduced their entry into the rec-utility market last Fall, and I was very impressed with the vehicle after driving it at the press intro in New Mexico (see Polaris GENERAL Review). The rec-utility category is new for Polaris, and the GENERAL slots in between utility-rec (RANGER) and Sport (RZR).

The GENERAL is a blend of RZR S 1000 and Ranger XP 900. Don’t let the dump bed fool you, the suspension and drive train are almost pure RZR S. With a 100 horsepower ProStar engine, the Polaris GENERAL has best-in-class power. And the suspension boasts 12-inches of ground clearance, plus 12.25-inches of front wheel travel and 13.2-inches of rear wheel travel from an a-arm suspension that is nearly identical to the RZR S 1000. Engine and clutch are almost all RZR S as well with minor tweaks to the calibration and tuning so the GENERAL can have the low-end grunt necessary to do work. I received our GENERAL 1000 EPS Deluxe in mid-February and decided that its first trip would be in the dunes. As most dune enthusiast do, I went on a hunt for a properly sized set of paddle tires. The GENERAL comes with 27-inch GBC Dirt Commanders which are a great tire for the trails, but a tad heavy for the dunes.

Thankfully my friend Rick from Placerville Polaris had a set of 28-inch STU Sand Blaster sand tires mounted on DWT beadlock wheels. He was looking to borrow a set of GMZ Sand Stripper XLs for his new RZR XP Turbo, so it turned into a perfect swap. In addition to loosing a chunk of rotating mass, you can see the 28-inch STU Sand Blasters fill the wheel well a bit more. It looked like we would have enough clearance for the front tires, but I wasn’t sure on the rears.

In addition, the wheel offset, combined with the wider rear tires increased our width 4″ in the front and 8″ in the rear.  Now a wider track width is a nice thing to have in the dunes.  It gives you more confidence, especially on side hills and when crossing ridges. But, the thing most people don’t factor in is the impact on the suspension. Moving the tires further out increases leverage on the shocks.  To keep the shocks close to factory specs, you would possibly need heavier springs and also different valving.

With the GENERAL setup with new shoes, I loaded up and drove to Sand Mountain, NV to test it out. Rick from Placerville Polaris and his friend Dave were bringing out their new RZR XP Turbos for the weekend, and I figured it would be a great opportunity to put the GENERAL up against the XPTs. One of the first things I noticed on the GENERAL when prepping for the trip is there is nowhere to mount a whip flag. Not that big of a surprise, but with the Lock&Ride cage, you can’t even bolt up a cage mount  since the cage isn’t round (although this cage feature is awesome when you want to add a Polaris windshield). I decided to zip tie the flag to the cage, and it worked fine. A little 2WD drift to get the feel of the GENERAL

On our first ride, I followed the two XP Turbos and we did a tour around the mountain. We did mostly lower dunes with just a few hill climbs. The GENERAL felt right at home. Power felt good and suspension was plush, but a bit soft for anything  more than chop.  At the first stop, I decided to see where the shocks were set. The GENERAL comes stock with Fox Podium X 2.0 QS3 shocks. These shocks have a 2-inch body and three levels of compression adjustment.  All the shocks were set to level 2, so I bumped them all to level 3. Although the bump to the most firm compression setting helped quite a bit, we were still able to make the rear bottom out in g-out situations. The rear paddle would actually hit the lever for the dump bed when it happened.  This really isn’t that big of a surprise since we added a larger diameter tire AND extended our width by 8-inches in the rear. To fix this, you could run smaller tires, add a lift kit, or upgrade shocks (add more compression valving, swap to heavier spring, or maybe try for a 2.5″ shock). The additional width did give us more confidence when side hilling. And the sand tires gave us more steering input and pull when the RPMs dropped.

Performance wise, I was impressed with the GENERAL. While the sand was wet under the first few inches of dry sand, I was able to climb just about anything with ease.  Front side of Sand Mountain was absolutely no issue and it even climbed the backside without much effort. This isn’t too much of a surprise base upon the 100 horsepower from the 999 cc twin cylinder ProStar. But this UTV does have a dump bed and has a work component built into it. I think the 65 ft. lbs. of torque that is delivered throughout the powerband really helps the GENERAL move up the steep climbs.

It isn’t real easy to see in the video, but this is a steep hill and although RZR XP 1000 and RZR XP Turbos don’t typically have any issues climbing it, I have seen my share of RZR XP 900s fail. Although I was only at Sand Mountain for about 24 hours, I put nearly 50 miles on the GENERAL. If I was going to by something specifically for hard duning, I would absolutely prefer a RZR XP Turbo. That being said, I had a great time in the GENERAL. It is a comfortable car with a more upright seating position that is right at home in the dunes, on adventure rides or around the ranch hauling tools or a few bales of hay. Power and suspension are more than adequate to do almost anything you want in the dunes.

The GENERAL is just plain fun to drive

With the great power, I guess the thing that excites me the most about the GENERAL is the suspension. While the shock setup wasn’t ideal for the sand tires and wheels I ran, the a-arms, mounting points and shock specs (length/stroke) are common with the RZR S 900/1000. That means more options for aftermarket solutions.  I will probably look into high clearance a-arms and maybe see if we can get 2.5″ shocks on it. I really like the standard half doors.  They do a great job at protecting riders from weather and trail debris and swing open wide to make it easy to get in and out. If you are used to a RZR, it will take a bit to get used to the latch which is on the rear of the door instead of up front (door hinges up front). The all-new cockpit was designed with a balance of work and play. The GENERAL comes with all-new seats that are designed for comfort whether you are out on the trail or mending fences around the farm. The seats more closely resemble those found in a RZR with bolstering that help keep you in place when running bowls. Driver seat also comes standard with a seat slider so you can adjust to varying driver height. Plus the seats are positioned more upright than a RZR which give you great visibility and make it easy for ingress/egress. The MTX Premium Soundbar that comes standard with the GENERAL Deluxe fits nicely.  Audio only works with key on. I think you should be able to play music even with the key off, and I can probably figure out how to swap that around.  The sound produced by this unit is decent for slow speeds, but lacks the punch for anything but cruising in the dunes. The system really needs an amp and subwoofer to be heard on dune rides.

Overall I believe the GENERAL is a great addition to the Polaris lineup. With borrowed engine, driveline and suspension from the sporty RZR S 1000, it truly excels in the sport arena. If I could only have one UTV, and it had to have a dump bed, the GENERAL would be my first choice.