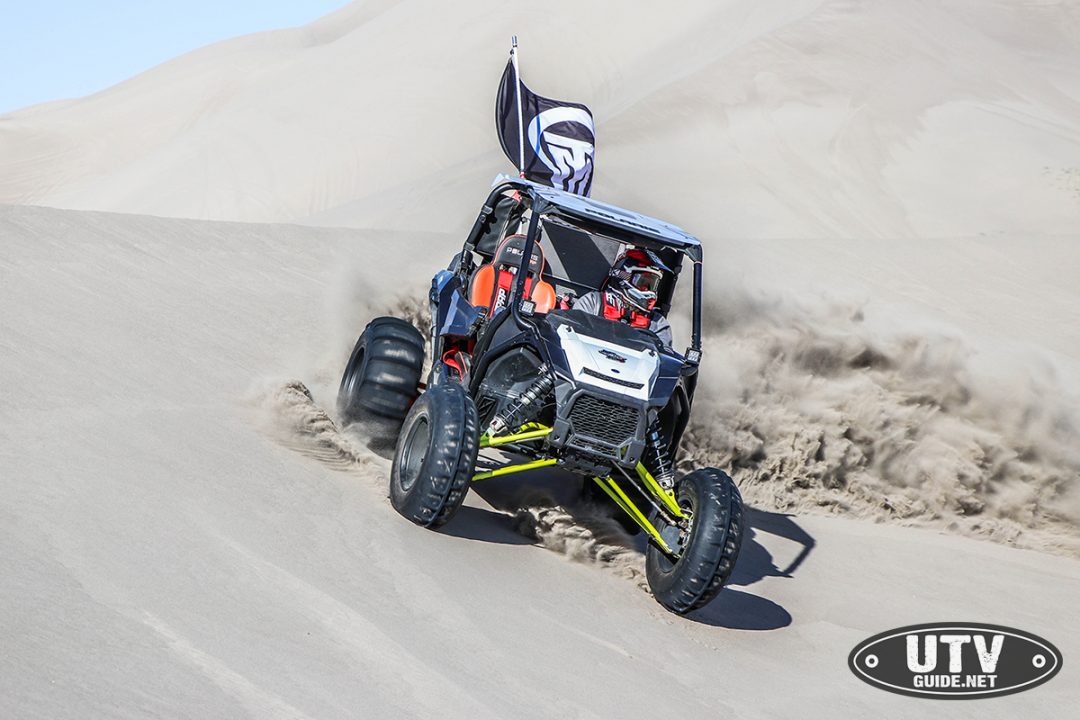 The term “custom build” doesn’t hold much weight these days. What used to mean stripping a UTV down to it’s chassis and rebuilding it from the ground up has become little more than up-fitting it with a cage, maybe some new tires and wheels and finishing it off with a custom wrap.

If that’s your build to a tee, we’re not knocking you, it’s just that over the last few years, it feels a little bit like real, from the ground up custom builds are harder to come by. A few standouts that come to mind are Wolf Design’s Werewolf and XTC Power Products HELL RAZR, both built by TMW Off-Road, as well as the crazy themed UTV builds from Rugged Radios like the Baja RZR, the Rugged General, the Beach Buggy and who could forget the all new Rugged ’32?

While each of these are show stopping vehicles in their own right, flashy good looks alone won’t make for a great performing custom vehicle. Case in point, the “Dumpster Bike” belonging to Polaris employee Jake Jain. During his 13 years at Polaris, Jake has worked in a number of roles but currently serves as a CVT technician where his duties involve working with engineers to develop better performing CVTs. This RZR is by no means cobbled together but because Jake utilized so many factory parts from different Polaris vehicle’s, he dubbed the build the “Dumpster Bike.”

We’ve known Jake for a number of years and always enjoy hanging out with him at the UTV Invasion held at Idaho’s St. Anthony Sand Dunes. This year, when Jake dropped the tailgate on his toy hauler, he had a little secret project inside that he was jonesing to try out.

Build’s that have a history always make for better stories and this car’s story began at Pismo Beach when Jake was just 17 years old. Long before the RZR (or any other sport side by side had been conceived) Jake got a taste of the dunes that he just couldn’t shake. Astonishingly, he wouldn’t find himself back in the sand until 2014, this time in Glamis. It was on a work trip with Polaris that Jake became hooked on riding in the dunes and simultaneously started thinking about this project that wouldn’t hit the sand for another four years.

As you can imagine, working for Polaris comes with some advantages. Although he still pays for parts and equipment, access to engineers and information the rest of us are not privy to was a huge asset during this build. From the get go, the idea was to create a RZR that handled like a sand rail. Because he only intended to drive it in the dunes, there was a lot of “excess” that he could do away with, first and foremost, the front wheel drive. Another huge weight reduction came by utilizing the standard Walker Evans Needle Shocks as opposed to the larger FOX Podium Internal Bypass shocks that come on the RZR XP Turbo. Ditching the front wheel drive and opting for the Walker Evans Shocks shaved more than 100 pounds off the RZR right from the start. The second 100 pounds to come off would prove to be a little more difficult however.

#throwbackthursday to @utvinvasion with our friend @utvjakefromstatefarm testing out his new “Dumpster” build in the dunes. #polarisrzr

Jake started with a standard RZR XP Turbo Chassis which he purchased from AZ Cycle Parts in Phoenix. Though the chassis remained mostly unchanged, Jake lowered the factory roll cage by trimming four inches off the back of the cage; eliminating some bracketry and the C pillars. It also allowed him to do away with the factory seatbelt retractors which saved him weight by switching to 5 point harnesses. Up front is where things started to get a little more technical and where his involvement at Polaris started coming in handy. For starters, Jake went with thinner brake rotors from an XP 1000 over the larger XP Turbo rotors. His reason being in the dunes, sudden stopping power wouldn’t be nearly as necessary as if he were racing or trail riding.

He kept the OEM control arms though he ditched the front sway bar. He also managed to shave another 3/4 of a pound from each hub without damaging the integrity of the hub. 3/4 of a pound might not sound like much, but we’re talking about revolving mass, which eats up valuable horsepower. With a relocated radiator and significantly lower front hood, it’s easy to tell this is no “ordinary” RZR.

The most obvious change one will notice is the relocated radiator and a significantly lower hood. In the dunes, a driver’s line of sight is a huge consideration so after moving the radiator to the rear, Jake set out to improve the visibility he could achieve from the cockpit. He ditched the glovebox and lowered the entire dash two inches. To figure out the hood and front grill, with the radiator gone, he placed a hood as low over the frame as he could go without having to cut into the frame. After fabricating some brackets to hold it in place, he trimmed down a factory RZR grill and matched it to the hood. Jake incorporated an Evolution Powersports power up kit to give the stock XP Turbo motor a little bump in horsepower.

To give the Dumpster Bike a little more horsepower, Jake went with a power up kit from Evolution Powersports. This included an EVO ECU tune, intake and charge tube as well as a performance exhaust to help it breath better and save a few extra pounds. Quadshop Customs worked with Jake on ensuring the clutch could handle the added horsepower and RCV axles would deliver the power to the rear wheels.

St. Anthony would be it’s maiden voyage and Jake shared that he was completely uncertain with how it would go. “I was honestly pretty nervous about how it would handle” Jake told us. “We removed a lot of weight from the front, including the power steering and completely changed the weight bias.” Jake wanted a wheelie machine and he certainly got it!

As it turns out, it handled better than expected. “I figured it’d be a really good hill car and if we could actually dune in it, that would be a plus.” Jake and his wife wound up carving the massive bowls of St. Anthony the entire week without issue. And if you’re thinking it’s probably a pretty good wheelie machine with all that weight removed up front, you’d be correct. We watched Jake lift the front end off the ground several times with little effort, the hard part seems to be knowing when to back off the throttle so as not to go over backwards. Jake airing it out in Idaho

Overall, we think he hit it out of the park with a true, purpose built custom UTV. While it’s not as flashy as what you see at the Sand Sports Super Show or on a busy weekend in Glamis, it’s truly unique and unlike anything else in the sand. What started as sort of a hypothetical question resulted in the machine we were able to witness in St. Anthony. Another cool fact is that, other than the handful of performance upgrades, the build uses all factory Polaris parts. This speaks volumes to Jakes ingenuity as an enthusiast as well as a dedicated member of the Polaris team. When you can build a custom car that is very obviously not stock using almost entirely factory parts, that’s something not many can, or would even attempt to do.

Though we didn’t get a chance to get behind the wheel, we’re pretty certain this won’t be the last time we witness the Dumpster Bike in action. It’s a safe bet, it’s only going to get better and better.