Minneapolis, February 5, 2015 –Polaris comes into the 2015 off-road race season with teams competing in the Grand National Cross Country series (GNCC), World Off-Road Championship series (WORCS), Best in the Desert (BITD), SCORE International, Lucas Off-Road Regional Racing Series (LORRS), King of the Hammers (KOH) and Mud racing. The company has expanded its race team once again for 2015 in RZR racing and will continue to field a Scrambler race team in GNCC. Polaris will continue to offer their ATV and Side-by-Side contingency and reimbursement program and has added a racer discount program for experienced racers on select models, including the Polaris ACE which a few racing series have added for the 2015 racing season.

“Polaris enjoyed a very successful 2014 race season and is excited to make an even bigger commitment to racing for 2015,” said Donna Beadle, race team manager for Polaris’ Off-Road Division. “We look forward to another great season.”

Polaris also will continue to sponsor Big Country Powersports’ John Yokley to run a RZR S 900 in the XC1 Pro class. Yokley has been in the top five in the class the past couple years and should have a great 2015 season.

On the ATV racing side, Michael Swift of Team UXC/Driven PowerSports has one year under his belt with the Scrambler in the Pro 4×4 class and will continue to race for Polaris in 2015. The team also has added Pro Racer Kevin Trantham and 4×4 Senior Racer Don Higbee, who spent 2014 racing Best in the Desert and SCORE with the Scrambler XP 1000 EPS. Team UXC/Driven PowerSports also will be fielding a Polaris RZR S 900 for the 2015 GNCC UTV races.

After winning the TORN Championship, Team UXC/Driven PowerSports’ Chris Robinson will continue to race the Scrambler XP 1000 EPS in Texas.

For BITD, Jagged X is back for 2015 racing the familiar No.1919 RZR XP 1000 piloted by 2014 BITD Champion Brandon Schueler and co-piloted by Blake Van de Loo. The No. 1931 car also will compete in all BITD races with Craig Scanlon as the Driver of Record and co-piloted by Keith Redstrom. Jagged X also will have Matt Parks competing in the SCORE series in the No.1932 RZR XP 1000.

Justin Lambert of Cognito Racing will continue to race for the RZR BITD and SCORE Teams. Lambert had a great 2014 with a win at the Silver State and looks to continue his success for 2015 in a RZR XP 4 1000.

Five-time King of the Hammers Winner Mitch Guthrie is back for 2015 looking to capture another hammer with the RZR XP 1000. Jagged X’s Blake Van de Loo and co-driver Brandon Schueler are in search of a hammer this year in their RZR XP 1000. Jagged X also will provide support for Jon Crowley racing a RZR S 900 and Andrew Gorman who will also race a RZR.

Team High Lifter-Polaris Racing will be muddin’ once again for 2015. Racers include Brian Haughton and Adam Schumaker who will race the Sportsman XP 850, Sportsman 570 SP, RANGER XPs and RANGER RZRs.

Polaris Contingency, Reimbursement Program and Racer Discount Program
New for 2015, Polaris is offering discounts on select RZR, Scrambler and ACE vehicles to those racers who raced at least half of the races of a qualifying racing series in 2014 and intend to race full 2015 season. For all other racers, Polaris will continue to offer their Reimbursement Program for new 2014 or 2015 Scramblers, RZRs and ACEs purchased after Sept. 1. 2014. Racers interested in this program will receive a $1000 reimbursement at the end of the season as long as they competed in more than half of the qualifying events (GNCC, WORCS, BITD, SCORE and LORRS). The reimbursement will be limited to the first 50 qualified submissions.

More information and complete rules about Polaris’ Reimbursement Program and racing contingencies can be found at www.polarisfactoryracing.com. 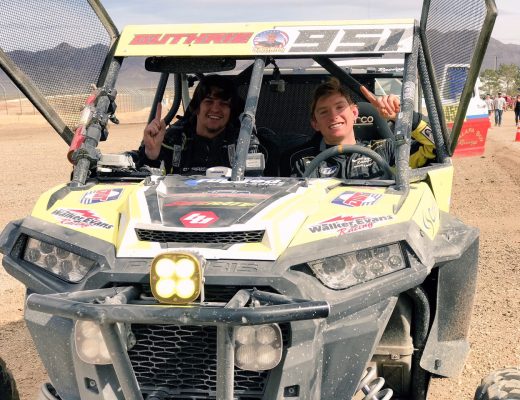