Polaris to have representation in various series

Minneapolis, February 2, 2012 –Polaris comes into the 2012 race season with teams competing in the Grand National Cross Country series (GNCC), World Off-Road Championship series (WORCS), Best in the Desert (BITD) and Mud racing. Polaris also will continue to offer their ATV racing contingency program and has added a Side-by-Side contingency for the BITD series.
“Polaris is excited for another year of ATV and Side-by-Side Racing,” said Donna Beadle, race team manager for Polaris’ Off-Road Division. “We had a great 2011 winning several championships and we expect 2012 to be another successful year.”

Rath Racing
Rath Racing is back for a third year to race the RZR XP in GNCC. Daryl Rath continues to dial in his RZR XP and will race the “Open Modified” Side-by-Side class.

Jagged X
Jagged X is back for 2012 for a run at the Best in the Desert championship, racing the familiar No.1919, with a newly built RZR XP 4. Brandon Schueler, Chad Riccio, Blake Van de Loo and Mike West look to recapture the championship for 2012. Jagged X also has signed 2011 BITD Champion, Matt Parks to run with the team this year in a second RZR XP 4. Both new RZR’s will be revealed at the Mint 400, in March. Parks started the 2012 BITD series out on a high note winning the “Pro UTV class,” at the Parker 250, in January.
Walker Evans
RJ Anderson will switch gears this year and race the WORCS series with his new Walker Evans RZR XP. Anderson raced a few WORC races in 2011 and ended up winning the final race of the season in the “SxS 1” class. He looks to capture the championship for 2012.
High Lifter

Team High Lifter-Polaris Racing will be muddin’ on Polaris’ once again for 2012. Racers include Brian Haughton, Josh Monroe and Adam Schumaker and will race the Sportsman XP 850, Sportsman 550, RANGER XPs and RANGER RZRs.

Polaris also will continue to offer an ATV race contingency program, in three ATV racing series, GNCC, WORCS and the Heartland Challenge, and has added a side-by-side contingency in the Best in the Desert Series. The total purse is more than $85,000. Racers must race 2008 or newer Sportsman XP 850 or Sportsman 550 ATVs for the ATV contingency and must run the Pro 1 class in a RANGER RZR product in Best in the Desert. More information and complete rules about Polaris’ racing contingencies can be found at www.polarisfactoryracing.com. 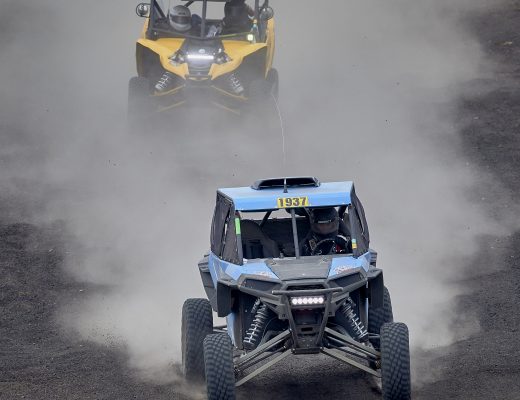