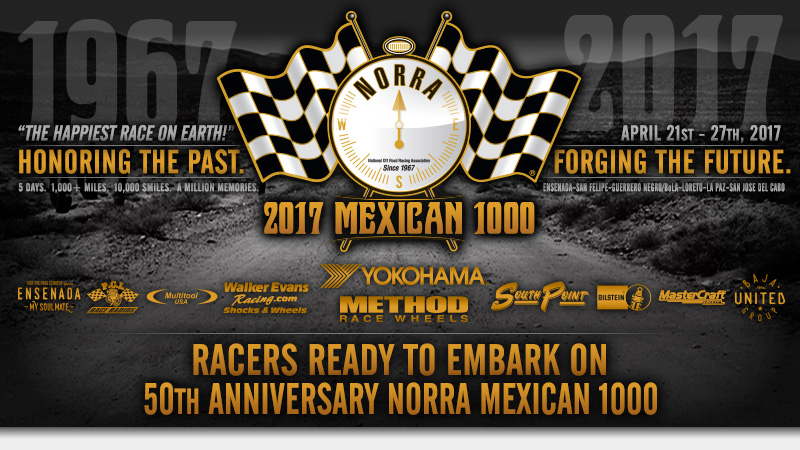 The “Happiest Race On Earth!” leaves Ensenada tomorrow. On April 23rd, over 240 teams will begin their epic adventure. The NORRA Mexican 1000 was first run in 1967. Until NORRA came in and established a sanctioned event, adventurers would compete for the fastest time running the length of the Baja Peninsula on their own. They kept track of their runs by sending telegrams at the start, and at the finish, to record their times.

Today, the race runs in a rally format with stages run every day. This year’s course starts in Ensenada, Baja Mexico, as it has for most of its history, and travels across the Baja Peninsula to San Felipe for the first evening’s celebrations. For the next several days, competitors head south from San Felipe to Bahia De Los Angeles for another night of celebration. On day 3, they continue down the peninsula; heading into the interior. They cross over to the west, getting a glimpse of the Pacific Ocean, before finishing the day back on the shores of the Sea of Cortez in Loreto. Day 4 sees more unique and spectacular landscapes in the interior on their way to La Paz. On the final day, the rally heads to the finish line in San Jose Del Cabo for a huge celebration. Many teams will continue to enjoy Baja on the trip home; stopping to camp on remote beaches or spend the day fishing. No other racing event immerses competitors in the food, drink, culture, and beauty of Baja, like the NORRA Mexican 1000. Competitors run the gamut from offroad racing icons and current stars, to adventure seeking average Joes and well-travelled lovers of Baja. NORRA has classes for bikes, quads, UTV’s, and 4 wheel classes for everything from vintage vehicles to state of the art race cars. They even have team Westy competing in their VW Westfalia van in the RV class. NORRA pays homage to the past and celebrates the future. If you didn’t make it down for the rally this year, make plans to attend next year, and tune into the live feed. NORRA will have live coverage during the week to bring you some of the action. You can find the live feed here: www.norra.com/live There will also be daily race reports that include personal quotes from competitors and insider information from people on the ground. The nightly race report, and additional information about NORRA, can be found here: www.norra.com/mexican1000