Nic Granlund on the top step of the podium 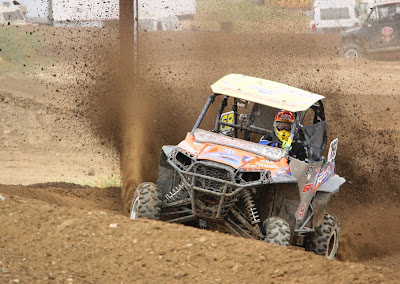 As Nic Granlund was preparing for the next round of the WORCS Series, he thought it would be a good idea to head down to Southern California for a doubleheader weekend. The weekend would start off with the Lucas Oil Regional Series race at Lake Elsinore and the following day at the Dirt Series at Perris raceway.
When Nic took to the track for practice at Lake Elsinore he quickly noticed that it would require a completely different set up then the Worcs series would require. With his pit crew, Nic made some changes to the Polaris RZR XP 900 before qualifying. As qualifying came around Nic still had some improvements to make but managed a ninth place qualifying  When the main approached Nic and his pit crew had made some changes including a different size of the STI Rocktane tires and some tuning to his FOX shocks that were expected to yield better results.
With a field of 20 competitors and starting from the fifth row, Nic used some creative race lines and quickly made his way up into the top five. On the 2nd lap, a competitor spun out in of him causing a collision and pushing Nic back to 10th. Again finding some great lines, Nic made his way back in up into the top five. As the final laps approached there was a yellow flag caution and the field was grouped up again. On the final restart Nic went a little wide in a corner allowing three competitors to slip underneath, while trying to regain his position Nic worked his way back to a seventh place finish!
With what Nic learned at this round of the LOORS series he feels confident that in the future he will be able to battle for a podium position. The second day of this double-header weekend brought Nic to Perris raceway for round two of the Dirt series. The dirt series is more of a motocross type track and Nic felt confident that with his years of experience racing ATVs this would be a excellent format that would suit his driving abilities.
Again after switching his STI Rocktane tires, tuning his FOX shocks on the Cognito suspension and topping off the Torco oil, Nic felt that his Yoshimura powered Polaris RZR XP 900 would be ready for the race. As Nic had strapped himself into his PRP racing seat the gate filled with 11 Production 1000 competitors dropped for moto one. With a mid pack start there was lots of tight racing and bumping through the first two turns when Nic noticed that his power steering had taken some hits and gone into overload protection mode causing Nic to complete the race with a lack of power steering. After several hard fought laps Nic had worked his way through the pack into the third position, with only a few turns to go the leading competitor tangled with some lapped traffic allowing The second place car and Nic to slip by. Nic followed the competitor closely to the checkers and ended up finishing moto one in second place! Between the races Nic and his pit crew diagnosed the steering problem and reset the power steering. Feeling confident with his set up, Nic made no other changes before moto two.
When the gates dropped for the second moto Nic timed it perfectly and managed to get the hole shots and while leading the first lap he came around to see a red flag condition. The race was stopped due to a rollover with a driver in a unsafe position. When the field lined up for a second time, Nic repeated his performance of getting the holeshot again. A few turns later a competitor made a aggressive move on the inside to take the lead only to miss a corner causing his car to roll over allowing Nic to regain the lead. From there on Nic held a steady pace for the next eight laps consistently putting time between himself and his competitors while driving fast but maintaining control all the way to the finish for the win! With a Moto score of second and first that gave Nic the overall victory for round two of the dirt series! 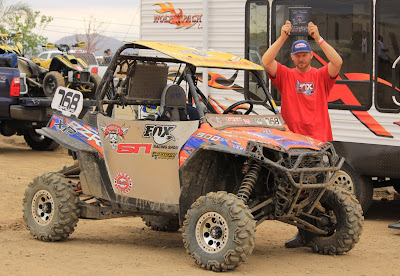 (Photos by Tedshred)
Nic would like to thank his pit crew of Mike and Tedshred for always being there and helping out! Nic would also like to thank all of his sponsors for their great products and continued support!! Fox Shox, STI Tires & Wheels, Got Tools racing, Cognito. Nic G Motorsports, Torco oil, Yoshimura, Motoactive, Triumph Motorsports, PRP Seats, Summers Bros Axles, DFR, CT racing, AME grips.