New plan could add 40,000 acres for off-highway riding at Glamis 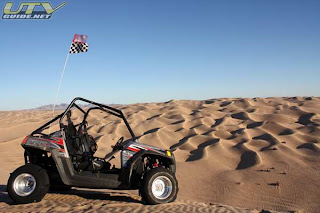 One of the country’s most popular off-highway vehicle (OHV) riding areas could soon see nearly 40,000 acres returned to the OHV ledger, thanks to a new plan developed by the federal Bureau of Land Management (BLM).
“This is great news,” said Nick Haris, AMA western states representative. “The groups that want to restrict off-highway riding have gone to court in the past claiming that the Peirson’s milk-vetch growing at Glamis is endangered and needs protection, but the U.S. District Court for the Southern District of California recently ruled that the plant is being protected appropriately.”
In April, the BLM released a draft Recreation Area Management Plan (RAMP) for the 200,000-acre Imperial Sand Dunes Recreation Area, popularly known as Glamis because of its proximity to that town in the far southeast corner of California.
The Imperial Sand Dunes area ranks as one of the most important public recreation areas nationwide, attracting more than 1.2 million visitors each year. OHV riders, through their purchases of food, fuel and lodging, contribute significantly to the local economy.
The public comment period for the RAMP ended June 23. Federal officials are now reviewing the comments, and the “Preferred Alternative”—that is, the plan that the BLM intends to follow that adds about 40,000 more acres for off-highway riding—is likely to be adopted unless the public-comment process points out a legitimate flaw in the BLM’s planning.
Under the Preferred Alternative of the new RAMP, 179,622 acres would be open to OHVs.
“A lot of credit goes to the BLM for its work to create a good recreational plan for the area, and to the various local groups who have fought the anti-access forces over the years,” Haris said.
Those groups include the AMA’s District 37 (Southern California), the Off-Road Business Association, the American Sand Association, the San Diego Off-Road Coalition and others that have fought back in court and organized users to submit comments to the BLM in favor of keeping the dunes open to OHVs.
Regulations and legal challenges have shut down major portions of the dunes that were specifically set aside for motorized recreation, including about 49,000 acres in recent years, leaving just 140,740 acres available for OHV riding.
The RAMP Preferred Alternative designates 11,670 acres as critical habitat closed to OHV recreation to protect the Peirson’s milk-vetch, which is a silvery, short-lived plant that can grow to 2.5 feet tall and produces small purple flowers, generally in March or April.
The federal court ruled the BLM critical habitat designation is large enough to adequately protect the plant.
“Under the terms of the California Desert Conservation Area Plan, which has been in effect for decades, open motorized recreation was restricted to less than 2 percent of the California desert,” Haris said. “And since then, opponents of motorized recreation have continued to whittle away at the riding areas that remained, forcing more OHV users onto smaller areas of land.
“This action by the BLM restores some of this vitally important recreational land, preserving responsible riding opportunities for the growing Southern California population,” he said.
It’s unknown when the new BLM plan will go into effect.