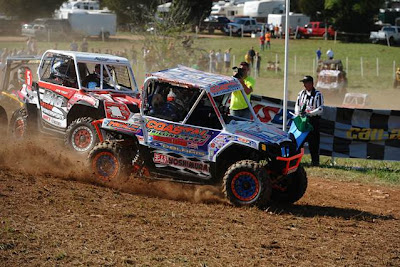 The Big Buck GNCC Side by Side Race Report
Union, South Carolina, April 20, 2013

The Racer Production promoters always lay out a good, challenging course for the competitors. This year, the 4-mile course featured a combination of technical woods sections and faster open areas with multiple racing lines. Track conditions were very good and the temp in the 70’s.

At the drop of the flag for the dead-engine start, the Polaris Team RZR XP 900’s fired right up and was at the head of the pack heading into the woods. After some initial dicing, William Yokley settled into the lead with Scott Kiger close behind. Midway through lap 1, Kiger clipped a tree and flipped over on his top. He and his passenger got out, righted the machine, and took off in hot pursuit of the lead pack. On lap 3 of 6, Yokley experienced some bad luck when his front wheel came in contact with another machine’s rear wheel resulting in breaking a steering component. Unable to steer, his day was over. 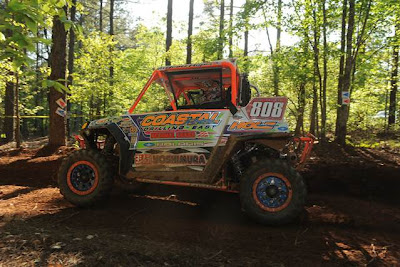 Scott Kiger was steadily working his way back in contention, and was able to get up to 4th overall at the finish. This was a great comeback after flipping over earlier in the race! Overall, the machines were running and handling great, which gives the drivers a lot of confidence as the head to the next event, The John Penton in Millfield Ohio on June 1. We’ll see you there!