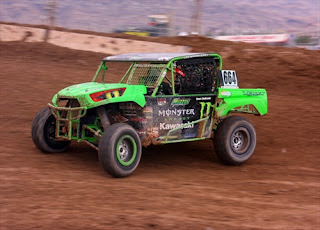 Muzzy’s Monster Energy Kawasaki’s Robert Van Beekum Takes Back-to-Back Wins in Las Vegas
Irvine, Calif. (November 8, 2011) – Muzzy’s Monster Energy Kawasaki’s Robert Van Beekum piloted his Kawasaki Teryx® to back-to-back wins at Rounds 13 and 14 of the Lucas Oil Off Road Racing Series (LOORRS) at Las Vegas Motor Speedway in Las Vegas, Nev. Funco Monster Energy Kawasaki’s Chad George scored two-consecutive podiums over the weekend with a 3-3 result. Kawasaki driver Tyler Winbury finished fourth both days of the two-day race weekend.
Building Steam
On Saturday, Van Beekum rolled his Teryx onto the track and quickly set the tone for the weekend laying down the fastest lap time in the UTV Unlimited class. In the main, he gapped the field by almost half of the track before taking the checkers. On Sunday, Van Beekum set the fastest time in qualifying before going on to take his second-consecutive win of the weekend.
“We finally got rid of the black cloud over our heads,” said Van Beekum. “We’ve had the fastest car for the last three rounds, but just kept running into little mechanical issues, like belts and shocks. On Saturday, I pulled into the lead around the first corner and just checked out. Halfway through the race I saw the SR1s battling behind me so I decided to play it smart and just let them by. On Sunday, I got another good start, but in the first corner one of the SR1s ran into me at nearly full speed, which broke my sway bar. I was able to recover quickly and continued to lead my class the rest of the race. To stay out front I had to enter the corners slower and really pin it on the straightaways. I managed to hold it together until the finish. Overall, it was a great weekend, now I’m sitting second in the points and hoping to carry this momentum into the final rounds of the LOORRS at Firebird.”
Top Contender
Four-time UTV Unlimited class champion George started off the weekend on the right foot grabbing the top qualifying spot on Saturday. When the gate dropped in the main event, George got off to a good start, but a mechanical issue forced him to slow down to salvage third place. Saturday night George’s crew burned the midnight oil swapping out engines in his car. By race time on Sunday, George lined up on the gate, but the bugs had not been completely worked out of the new engine. Although he wasn’t able to go full throttle, George managed to salvage points by finishing third.
Double-Edged Sword
Despite dismal weekend forecasts, fans packed the stands at Las Vegas Motor Speedway come race day. On Saturday, fans and racers watched the first wave of the storm roll through. Although it only delivered light showers during the race, throughout the night storm clouds unloaded over an inch of rain on the track. The saturated track forced the event organizers to cancel practice Sunday morning, but racing resumed shortly thereafter.
“It rained on us the whole weekend,” said Van Beekum. “During the race the track conditions were absolutely perfect. The sandy, wet conditions provided perfect traction, but adversely added weight to the car. We probably gained at least a couple hundred pounds of mud under the vehicle by the end of the race. I could feel the weight in the wheels, but my Muzzy’s powerplant has plenty of power, so I didn’t notice a difference in acceleration. The cool weather was a nice change from the blazing heat we dealt with the last couple rounds at Speedworld.”
Back to Arizona
In five weeks, Muzzy’s Monster Energy Kawasaki’s Van Beekum heads back to Arizona for the final rounds of the LOORRS series at Firebird Raceway in Chandler, Ariz., where he hopes to earn enough points to secure the championship. Funco Monster Energy Kawasaki’s George has plans to take control of the series at Firebird to earn his fifth-consecutive UTV unlimited class championship. With both racers so close in the points, the finale Firebird should prove an exciting weekend.
Results