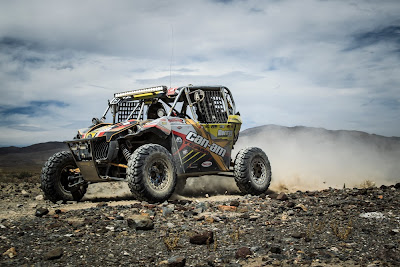 “It was an incredible weekend for Can-Am in the Nevada desert. Despite a grueling 500 mile-plus course, drivers Derek and Jason Murray, their teammates and the Can-Am Maverick 1000R outlasted the Nevada desert to earn Can-Am its first-ever Vegas To Reno victory,” said Jimmie O’Dell, Race Manager, Can-Am. “Considering the fact that the Murray’s are essentially using a stock engine and are competing against fully built race engines, this makes the win even more spectacular for both Can-Am and the Murray team.”

Round four of the 2013 BITD series was held in the rough-and-rocky Nevada desert, and featured the popular-and-challenging Vegas To Reno event, which is dubbed the longest off-road race in the United States. Coming into the event, the Murray Racing / Del Amo Motorsports / Yoshimura / Can-Am team was sitting in second place in the UTV Pro class (1900 P) standings, 22 points behind the leader. However, after the dust had settled, the Murray / Can-Am team had won its first BITD Vegas To Reno event. And, the team also had turned its points deficit into a four-point advantage heading into the next round.

“Winning this race was one of our biggest accomplishments due to the length of the race and that our Can-Am Maverick was awesome, with no performance issues. This was a fun race to win, as we were running within minutes of our main competitors for most of the entire race.” said Derek Murray. “It’s really cool that we could win with a stock engine along with stock differentials and CVs. To be the only UTV team in the race that beat all the 120 to 130-mph trophy trucks to the finish line was a huge accomplishment, something that our team is very proud of.”

The Murray’s Maverick took off first from the starting line and the team wasted no time spreading the gap over the competition. It owned around a 10-minute advantage at the 100-mile mark, according to team co-owner Derek Murray. At midpoint of the race, three teams were battling for the overall lead. Those teams actually swapped the lead a few times during the 380- to 415-mile sections, said Murray. The race for the lead picked up from there, as the Murray team swapped positions with two other teams that were vying for the lead. After the 415-mile mark, though, the Maverick had dropped off the lead pace when the race hit the high-speed sections. However, the Murray squad kept a steady pace and remained patient, waiting for its opportunity to regain the lead. The Murray / Can-Am team took over after the leader dropped out due to a mechanical and went on to win its first BITD race of 2013 and the first Vegas To Reno event for Can-Am.

The Murray / Can-Am team (Derek and Jason Murray, Bill Kugel and Monty Aldrich) impressively finished 32nd out of 76 motorcycles, ATVs and side-by-sides competing in its racing category. The No. 1917 Can-Am Maverick was also the only side-by-side to finish ahead of the high-speed, Unlimited four-wheel vehicles and trophy trucks that started the race roughly three hours after the side-by-sides. Murray says it was just the second time in BITD history that a SxS has finished ahead of the unlimited vehicles.