Irvine, Calif. (May 23, 2011) – Monster Energy Kawasaki’s Teryx® pilots dominated the podium at Rounds 5 and 6 of the Lucas Oil Off Road Racing Series at Glen Helen Raceway in San Bernardino, Calif. In the UTV unlimited class, Kawasaki Teryx drivers secured four of the six podium positions over the course of the weekend. Chad George battled hard to maintain his points lead, scoring third-place finishes in the both rounds of the two-day race weekend. On Saturday, Tyler Winbury pushed his Teryx out front to grab the win after George ran into mechanical issues. On Sunday, Robert Van Beekum also fought through the field to score a second-place finish.

Fighting for Points
George came out to Glen Helen with high hopes for the new engine his team had recently dropped into his Teryx. He got off to a great start on Saturday, but a mechanical issue forced him to slow down, which landed him in third place. His pit crew stayed up late Saturday night swapping engines and getting prepped for Sunday. When the green flag dropped Sunday, George got off to another great start and pulled into the lead early. He led over half of the race before finishing again in third place. Although he ran into some bad luck this weekend, George was able to salvage enough points to maintain his lead in the overall points standings.
“We started out Saturday with a new engine and ran into some issues,” said George. “During practice the engine performed great and we logged the fastest lap time out of both the UTV classes. When the green flag dropped Saturday, I pulled into the lead early, and was putting a good gap on the field, but had to slow down after my engine heated up. I wanted first, but had to race smart just to salvage third place. We swapped engines on Saturday night and came to the race Sunday with the engine we ran last year. Again, I got out front early, and was putting a solid gap on the field when my drive belt broke. I tried to race smart this weekend and ended up in third place on both days. Despite the mechanical issues, I’m happy we were able earn enough points to stay on top of the leaderboard. We still have nine rounds left and lots of wins to come. We know we’re fast and we can win, but we just need to get these bugs worked out.”

Getting Dialed-In
Van Beekum came into this doubleheader race weekend with his Teryx armed for battle. He got off to a good start on Saturday, but was forced to retire early. Sunday he was able get his Teryx dialed back in and charged out to the front of the pack past the half-way point of the main event. He led until the final lap, but got tangled with another driver and finished second.
“This weekend it took some time to get everything dialed-in,” said Van Beekum. “Saturday started off good. I got a decent start and was moving through the field quickly, but a mechanical issue forced me off the track early. On Sunday, we made a few adjustments to the Teryx, which really ended up paying off. I got a good start and moved into second behind Chad (George). I was closing in on Chad when he had to pull off the track, and I pulled into first. I was leading until the final lap, but lost radio communication with my spotter which allowed RJ Anderson to sneak up behind me. He made contact with me around a corner and knocked me into the wall. I was able to recover quickly enough to cross the finish in second place. The Teryx is by far the best handling car on the track. Its power is really second to none, and it’s been such a great car to drive.”

Green Machines On Top
The two-day race weekend at Glen Helen proved to be an exciting weekend for racers and fans alike. On Saturday, Winbury got off to a good start and pulled into second behind George. When complications forced George to slow down, Winbury quickly took advantage of the opportunity and powered his Teryx into the lead. Once he got out front, he put a good gap on the field to take the win in Round 5 of the UTV unlimited class. Over the course of the weekend, Kawasaki Teryxs led more laps than any other vehicle in the UTV unlimited class. Teryx pilots commanded the majority of podium positions over the two-day race weekend, securing one win, one second-place and two third-place finishes.

Utah Proving Ground
At the end of June, the Monster Energy Kawasaki Teryx race teams will head to Miller Motorsports Park in Tooele, Utah for Rounds 7 and 8 of the LOORRS. With engine restrictions lifted in the UTV unlimited class, all of the Kawasaki Teryx race teams plan to upgrade their engines to the maximum allowable size. Utah should provide an exciting proving ground for these race teams as they learn to handle their new power plants and continue to push their Teryxs to reach the top of the podium.
Results
Lucas Oil Off-Road Racing Series (LOORRS)
Glen Helen – San Bernardino, Calif.
May 21-22, 2011
UTV Unlimited Class Results – Round 5 (Saturday)
1. TYLER WINBURY, KAWASAKI
2. RJ Anderson, Polaris
3. CHAD GEORGE, FUNCO MONSTER ENERGY KAWASAKI 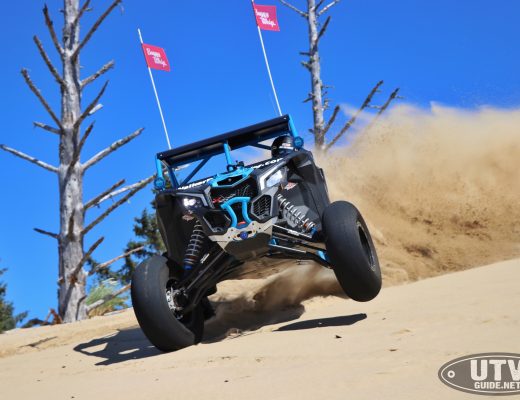