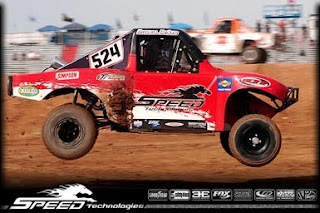 Temecula, CA (April 29, 2010) – Mitchell DeJong made the second stop of the Lucas Oil Off-Road Race Series (LOORRS) look easy in Surprise, Arizona, as he swept the weekend activities claiming an unprecedented 4 podium positions. By qualifying pole-position both rounds and claiming both wins, the on-track victories made him the first Modified Kart driver to sweep the complete weekend on the leader-board!
Debuting an all new Yamaha powered DeJong SuperKart, Mitchell and his Speed Technologies team only had one day of test time following the build. Well, it passed the test with flying red, white and black colors as it flew threw the checkered flag in 1st place both days!
Mitchell said, “I love my new truck. I was used to it the first day I drove it because it handles so good!”
The introduction of the DeJong SuperKart should be no surprise to racers on the track, it’s manufactured by Vince DeJong an accomplished fabricator, machinist, and determined race-dad. The SuperKart design is a cooperation with Vince and Tim Carroll of CRD.
Vince commented about the new race truck, “The competition is tough in the Modified Kart class, teams are going all-out to win, and it’s our job to be right there with them. Manufacturing a faster truck not only will help Mitchell progress, but our business is building performance off-road cars, and Mitchell proved in one weekend we have built the right package for other teams to step into.”
LOORRS Rounds 3 & 4 Summary:
After a quick draw from the hat, Mitchell found his Saturday’s fast lap pole-position struck down and his Speed Technologies truck starting in fourth position for the Round 3 main event. The inverted start is believed to create more action for the fans and to test drivers full capabilities. Although not his favorite position to be in, Mitchell quickly took action once the green flag dropped. By avoiding the tight Arizona first turn pile-up, he led the rest of the race taking the top spot and his second victory of the season!
After another pole setting pace early Sunday morning, and a lucky draw for no inverted start, Mitchell once again took the early lead in his #524 Speed Technologies SuperKart. He set a blistering fast lap at 42.232, a whole second faster than everyone. By the time the competition yellow came out, he’d opened up a sizeable lead. After stacking up the racers for more door-banging action, the mid-race green flag flew and Mitchell consistently hit his marks, racing away from the competition. Sunday’s victory completed a weekend of pure domination by the 12 year old, and tallied his 4th podium finish in four races!
Mitchell travels to Las Vegas Motor Speedway on May 8th, but pounding the Bullring 3/8 asphalt oval in his DeJong Legends Car. Support Mitchell in his rookie year as he races against former off-road racer and friend Austin Reed. Then he quickly returns to Las Vegas Motor Speedway seeking his 5th podium in a row on May 22-23 for Lucas Oil Off-Road’s Round 5 & 6.
Mitchell would like to thank all of his sponsors and supporters including: Speed Technologies, DeJong Off-Road, Fox Racing Shox, Yamaha, DWT, Simpson Racing Products, Ultra Boats, Eliminator Motorsports, Amsoil, Streight Edje, Traxxas, T.E.C., Zip Tie Productions and PayDirt Media.
For more race photos and videos, visit www.mitchelldejong.com and www.speed-technologies.com
For more information about the DeJong SuperKart, contact DeJong Off-Road Manufacturing at 951-461-1933 or visit www.dejongoffroad.com

About Speed Technologies:
Speed Technologies ignited onto the global arena as a professionally executed motorsports machine in 2006. In its brief yet highly storied history of accomplishments and associations, Speed Technologies has proclaimed its prowess with fledgling achievement in the world of motorsports and as a viable business initiative.
The man behind the vision is none other than John Harrah. Residing at the helm of a multitude of prominent enterprises, his name is most synonymous with the Harrah hotel and casino enterprise and is likewise headquartered in Reno, Nevada. For more information visit www.speed-technologies.com