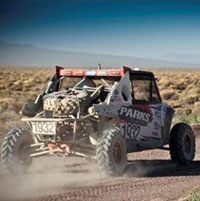 As he chased the Best in the Desert (BITD) UTV championship in 2011, Matt Parks knew that first-class tires were a must – and he got what he needed in the new Maxxis Vipr.

“The Pro UTV class is very competitive, and any downtime due to flats can kill your race,” Parks told MaxxDaddy. “The Viprs have proven to be not only durable, but also very puncture- resistant. I am extremely happy with how they perform in all types of terrain from rocks and sand to hardpack.”

“I switched to Viprs for Vegas to Reno looking for more high-speed stability and more flat-resistance,” he continued. “Knock on wood; I haven’t had a flat in over 1000 hard race miles. The traction is terrific, and they really perform well at high speeds. I am loving the new tires, and it is funny how many racers have switched to Viprs since I started running them.”

While his Maxxis tires performed consistently, the past season was not without drama for Parks. After landing on the podium in the first race, he won the next two events. On track for yet another victory, this time in the Vegas to Reno contest, Parks was thwarted by a broken A-arm, but still managed a second-place finish. A win in October’s Blue Water Desert Challenge, plus second place in the season’s last event, finally secured the championship for this seasoned rider.

With an extensive racing background, Parks has both the experience and the skill to weather brutal BITD and SCORE desert events. In addition to UTVs, he has raced motocross, cross country, enduros, and desert on bikes and full-sized buggies. He has competed in two Baja 1000 races, and his victory in the 2007 Baja 250 made him the first UTV rider ever to win (and finish) a SCORE Baja event.

The lessons learned through his racing experience aren’t always obvious. According to Parks, the key to winning a desert race is counter-intuitive at first glance. “The biggest challenge of a desert race is to go slow enough to win,” he says. “I know this sounds weird, but a lot of guys lose their minds in the first 20 miles and crash and break. We just go out with a fast and smooth pace, and typically we find ourselves in the lead after 20 or 30 miles without having to push too hard. So being smart is the biggest challenge when all of the adrenaline is pumping at the beginning of a race.”

Based in Newport Beach, California, where he lives with his wife Karen and the couple’s two sons, Parks has another connection to the industry in addition to his racing career: He is western regional sales manager for Polaris, the manufacturer of his championship-winning UTV. Even with his inside connections, however, competition is no easier for Parks than for any other racer. He says that while his job has opened doors and provided contacts, racing is fundamentally about results.

Parks’ fans can look forward to another great season of racing from this industry veteran. Maxxis looks forward to cheering him on to more victories in 2012.