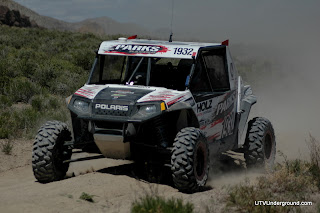 Lynden, WA (May 1, 2011) – Under sunny skies Matt Parks and Mark Holz started 5th in the Bilek Racing Silver State “300” Pro UTV Class. Held April 29-30 & May 1 outside Mesquite, Nevada, the race is the second UTV race in the Best in the Desert racing series. Driving Parks’ “Baja Bobsled”, a custom 2-seat RZR 4 built by Holz Racing Products, the duo maintained a calculated, steady pace during their 300-mile ride. “The Kroyer Stage 3 motor ran great and everything went pretty well until pit 5,” Mark said after the race. “Our crew was MIA! Matt and I bummed some fuel then got a flat before pit 6. We managed to catch up to the Jagged X car before the finish line.”

Matt Parks will race his Parks Racing/Holz Racing Polaris RZR 4 next at the Epic Bluewater Grand Prix, part of the Best in the Desert Series, May 13-15 in Parker, Arizona.

Mark Holz will race his Holz Racing/Motoworks/DWT Can-Am Commander at the World Off-Road Championship Series Round 5 May 27-29 in Payette, Idaho.