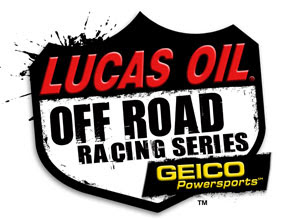 For the first time, the Lucas Oil Off Road Racing Series has made its way north to the beautiful confines of the Miller Motorsports Park here in Tooele, UT, just outside Salt Lake City. With snow-capped peaks lining both sides of the beautiful valley into which this outstanding facility is nestled, views between on-track action make this a unique and wonderful setting for a weekend of racing. This weekend marks Rounds 7 and 8 of the 2010 LOORRS championship season, and with Friday qualifying getting moved to Saturday morning this weekend, all eyes were on the Super Lite Grill ‘N’ Thrill Challenge Race, a ten-lap shootout for the Super Lite class which finished off a fine day of practice action and was a great introduction to off-road racing for the Utah fans.
Jeremy “Twitch” Stenberg got the ball rolling, taking the early lead in his #88 Rockstar Energy/Metal Mulisha machine. Close behind came Ricky James in the #24 Rockwell truck, followed by Chad George, Dawson Kirchner, and CJ Greaves. In the early going, James was really dogging Stenberg for the lead, though Stenberg was able to hold his lines and maintain the lead. Behind these two, Kirchner moved his #16 Speed Technologies truck up to third. The top five drivers were clearly separating themselves from the rest of the pack, with Jacob Person having to weave through the slower trucks further back in an effort to make his way up to the leaders. Person moved his #29 Geiser Bros Design and Development machine up to sixth, and was now trying to bridge the gap across to the leading five trucks.
Within those top five, action was really heating up. George moved back up to third in his #42 Kawasaki-sponsored truck, with Greaves in tow in the #33 Traxxas machine. Both drivers got by Kirchner, who’d ducked into the hot pits and fallen well back. Further forward, James had finally found a way around Stenberg, and took the lead just ahead of the competition yellow. At this point, it was James out front, followed by Stenberg, George, Greaves, and Person.
When the green dropped again, Stenberg and Person both got great restarts, and the two slotted in first and third, split by James and followed by George and Greaves. The top two began to pull away a little bit, while further back, the #92 of Brandon Ward was putting some pressure of Greaves for his fifth spot. Late in the going, James’ machine began to slow, slightly at first, which allowed Person to catch him up, then much more severely, dropping well down the order. Person seized the chance to challenge for the lead, moving past James and into second with one lap to go. Person charged hard, and briefly took the lead with no more than half a lap to go. It wasn’t to be, however, as Person broke something in his rear suspension with just a few corners left, causing his truck to sway uncontrollably, and dropping him down to fourth. With Person well behind him, Stenberg cruised home to take a convincing win, followed by George, Greaves (who set the fastest lap at a 1:15.164 on the final lap), Person, and Ward.
Action will get underway bright and early tomorrow, with Modified Kart Qualifying beginning at 9:00 am. Racing kicks off at 1:00 pm with the Modified Kart main event, so be sure to make your way here to see the action at this top notch racetrack. If you can’t be here in person, and even if you can, stay tuned to lucasoiloffroad.com for all the latest LOORRS developments.

Second Podium Sweep for Can-Am at King of the Hammers