LSR SR1 race team knocked down, but not out 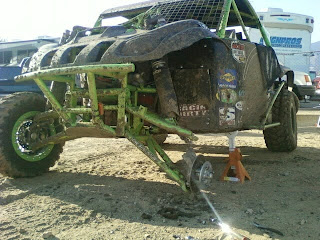 The LSR SR1 race team was back at it and was very excited to be racing at Glen Helen.  With all of the history that has gone on at that world renowned facility, the team knew they were part of some new history with the return of Short Course Racing to Glen Helen and Southern California. Knowing the stands were going to be jammed packed with eager fans, LSR was looking forward to putting on a great show with some highly competitive racing. The track was sold out and even a large amount of fans were turned away as Saturday evening progressed.
Friday’s rounds of practice went well, but while waiting an extra hour in staging for practice number 2 with no water, Greg was feeling a bit dehydrated. This had a deteriorating effect on him and caused him to be a little off his game for qualifying even though he still managed to qualify mid pack.
The team started out Saturday with making some shock changes to handle the track better and to help keep the car under control through the rough terrain. After getting the shocks back on the car, they found out there was a last chance 2 lap practice. So they scrambled to get back out on the track to make sure the changes were correct. In 2 laps, Greg was able to shave over a full second off his practice and qualifying times. LSR were very confident going into the main as they were putting down times to run at the front of the pack.  On to the main event! Unfortunately, with a super wet track (it had mostly been dry up to this point) Greg was blinded by muddy roost, hit a slick spot in turn one and slammed into the concrete k-rails just after turn one, ending the day. The car suffered a significant amount of damage both front and rear, as the car slid into the wall making contact with the front and rear tires simultaneously. Being prepared from the flip last race, they had almost all the spare parts needed besides a front spindle. Weller Racing to the rescue again and had an extra to lend to the LSR SR1.
Sunday was redemption time. After watching 15 laps of chaos on Saturday, LSR knew it was more about surviving, than being the 1st car out front. So starting at the back of the pack, at the drop of the green flag, Greg was a little more cautious through turn one, and while he was able to pass 3 cars by the “un-rhythm” section after turn 2, he had his sights on the next car and he was gaining ground as the cars danced down the jumps into turn 3. Greg was on the inside with another car far to the outside and suddenly that car cut into Greg’s line, making contact and ripping off the front wheel causing Greg to pull off to the side. It was a moment that radios were removed from the crew’s ears, so they didn’t have to listen to the extreme frustration Greg was releasing from his mouth. After watching the in car videos after, it was clear that Greg was the victim of an unfortunate mishap. But that is what racing is all about. Riding out the lows and constantly fighting for those highs! It was a frustrating way to end the weekend, but the LSR team will be back strong for rounds 11 and 12.
So to conclude the weekend, 2 DNF’s are for sure not going to help LSR in the championship points race, but there are still 6 more rounds of racing left this season. So LSR will be continuing to fight for top position, which should make for some interesting racing!
The next race is at Speedworld in Surprise, AZ the weekend of September 25th. Make sure to come out and see all the action!
Also, for all you Southern California and sand dune fanatics, LSR will have their race car on display at the Sand Sports Super Show in Costa Mesa the weekend of September 18th, in Lone Star Racing’s booth. 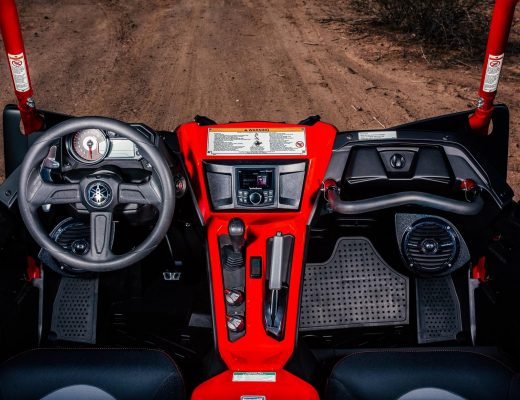