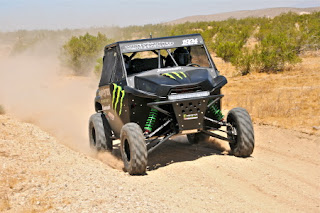 BITD Vegas to Reno this Weekend!

The team has used the off season to focus on improving their Kawasaki Teryx. Since the Blue Water Grand Prix in April the team has completely gone through the car not leaving one nut or bolt untouched. A fresh 916cc V-twin from Muzzy’s was installed and the XMF suspension and Walker Evens shocks were freshened up to tackle the 554 miles of Nevada Desert that the team will face on Friday.

The team will arrive for Tech and Contingency Wednesday at the Aliante Casino in Las Vegas, NV and then race Friday starting in Beatty, NV and finish in Dayton, NV just outside of Reno. Vegas to Reno is known for its’ high speed desert sections, long silt beds, and large elevation changes not to mention the extreme heat that teams will face during the race.

The draw for starting positions wasn’t as favorable for us as we drew a 6th starting position with a couple of the fast guys in front of us. The good news is our Monster Energy Kawasaki is running very well right now. Repeated tests in Barstow this summer have been very successful and shown positive improvements.

You will be able to track our Monster Energy Kawasaki on Friday during the race by visiting www.racetheworld.net and clicking on live tracking for Vegas to Reno. We are car number 1924.

The Countdown To 2012 Polaris Models Continues