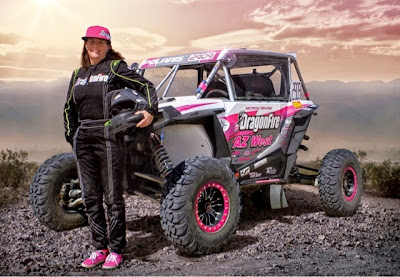 Fresh off another Mint 400 win, Team DragonFire/AZ West/Polaris UTV Pro Unlimited pilot Lacrecia Beurrier is ready to strike it rich at Best In The Desert Silver State 300 race on May 1-3.She is off to a great start, drawing the #1 starting position for Saturday’s race!
Although event promoter Casey Folks notes the eastern Nevada course is considered one of the most scenic races of the Best In The Desert Series, drivers still have to contend with the dust. Fortunately Lacrecia hit the jackpot and drew the #1 starting spot for the Silver State. “With 40 UTVs pre-entered, we are in the biggest class in BITD,” she says. “It will be nice to start up front and avoid eating the dust of two dozen UTVs for 300 miles!”
The point-to-point format also changes pit strategy considerably. “Pit crews love the Silver State 300 because it gives them a chance to chase and be an integral part of the race,” claims Casey. This meant crew chief Eric Beurrier had to prep the chase truck as well as completely tearing down and rebuilding the race car after The Mint 400. “We gave the old Ford a new wrap and fresh fluids thanks to Royal Purple and we should be good to go,” Eric says.
Despite switching to the Unlimited Class this year, double points at The Mint 400 and 3rd place in the inaugural UTV World Championships race, Lacrecia is on top of the points chase headed into the Silver State 300. With a combined points total of 275, Lacrecia is 44 points ahead in the Best In The Desert championship standings. “We aren’t counting our chickens before they are hatched,” cautions Lacrecia. “Anything can happen in desert racing… and usually does.”
BITD also allows for a “throw-out” race which means every point  counts. “We will automatically delete your lowest points when we calculate your Year-End Class Championship points, after the last race of the year,” explains Casey Folks. “That makes finishing on the podium critical for us at the Silver State,” Lacrecia adds.
Lacrecia would like to thank all the sponsors supporting her drive to strike it rich with the Best In The Desert Pro Unlimited championship this season, including DragonFire, AZ West, Polaris Industries, Bell, BS Sand, Bulldog LED lights, CP-Carrillo, Dalton Industries, Factory UTV, Gates, ITP, Lonestar Racing, Monster Seal, Mothers, Muzzy’s, Queen Racing, Raceline Wheels, Radflo, Rockstar Customs, Royal Purple Rugged Radios and Tred.
More details on the Canidae Tap It Silver State “300” can be found at:
http://bitd.com/best-in-the-desert-races/ss-300.html
###
ABOUT LACRECIA BEURRIER:
With three Mint 400 wins under her belt, Lacrecia Beurrier knows a thing or two about battling long odds. However she races for a greater cause — she is out to honor the survival, determination and compassion of those fighting breast cancer. The pink ribbon for breast cancer awareness is not something Lacrecia just slapped on the car during Breast Cancer Awareness Month. “Racing For The Cure is where it all started for me,” she says. “My first race in my old Rhino was a charity event to raise money for the program.” Lacrecia quickly went from charity events and powderpuff racing to the real deal, competing in what is billed as America’s toughest off-road race, The Mint 400! Not only did she finish the race, she won the Sportsman UTV class first time out and then came back to successfully defend her title. This year she stepped up to the Pro Unlimited Class… and promptly won The Mint 400 again! She is proud to have put her hot pink Polaris XP 1000 on the top of the podium for all three of her Mint 400 wins. She is a true champion, on and off track — when she is not ripping it up on the race course, Lacrecia’s “real” job is as a registered nurse in Lake Havasu. DragonFire and AZ West are honored to have teamed up with Lacrecia’s Rockstar Custom Motorsports effort this season. Visit Facebook.com/Rockstar-Racing for details on Lacrecia Beurrier’s program.
FEEL THE HEAT!
The name says it all! DragonFire continues to crank up the heat when it comes to the best products in the UTV business. DragonFire has everything from engine and suspension components to bolt-on accessories! We feel your passion, so when you think of UTV parts and accessories think of the Dragon… and Feel the Heat!