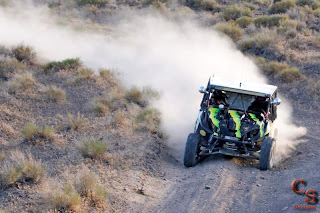 RENO,NV AUGUST 31, 2010: The VORRA Hawthorne 225 desert race Labor Day Weekend will include a parade through downtown Hawthorne and the movie premier of Dezert People 8 at the El Capitan Lodge and Casino on Saturday September 4th. The race will start Sunday morning at 8am. The Hawthorne 225 is the fourth desert race in the 2010, eight race VORRA series that includes an additional four short course races.

“The Hawthorne 225 track has some gnarly sections with a couple of rough spots on the north end and some very deep silt beds. The roller coaster section is free of wash outs this year on the backside and is going to be a blast,” said Wes Harbor, VORRA Director. The course is a 55-mile loop that drivers must complete 4 times to finish within the allotted time frame.

Fans, spectators and locals are encouraged to come out to enjoy the festivities Saturday on Hawthorne’s Main Street at El Capitan. Tech and Contingency will be hosted from 1pm to 4pm where the drivers will be available with their vehicles. At 5pm, there will be a parade of desert trucks, cars and UTV’s through town. At 8pm, all the drivers and crews will be focused on the premier of Dezert People 8, a family-friendly desert video featuring many clips from previous VORRA races.
The race on Sunday is a closed course with spectators only allowed at the Start/Finish line and in designated pit areas. Limited Pro and UTV’s leave the line at 8am followed by Pro Classes and Sportsman at 9am. Racing action will last all day until the finish line closes at 6pm. The evening will conclude at the 9pm awards ceremony at the El Capitan.

The season points battle continues to be close, with two short course races remaining after the Hawthorne 225. Mike Koenig sits in first place with 379 points after the Class T win at the Fallon 250. Class 1 driver Sam Berri is one point behind, then Brad Falin in the Ultra4 class is in third at 357 points. Previous leader Patrick Timmons finished 6th in Class 10 at the Fallon 250 which dropped him to 4th place with 347 points.

VORRA is in its 35th year of producing high quality yet affordable racing while also creating fun events around the race making it a great place to have friends and family enjoy a warm summer day spectating or competing. The starting line grid is already shaping up with many of the VORRA family pre-registered. This race is a great opportunity to bring your desert racer out to race, be sure to pre-register today.

** ATV’s are racing Saturday at the first two short course events, more dates TBA.
Valley Off Road Racing Association (VORRA) was established in 1975 as a family-oriented organization and is led by current promoter Wes Harbor who believes that “off road racing has its roots in people’s garages”. VORRA is the only organization to offer both four short course races and four desert races as part of its overall season championship. Each race draws over 60 racers between multiple classes available for Cars, Trucks, Pilots, ATV, UTV and Trophy Karts. In 2010 VORRA has added two additional truck classes and a stand alone ATV Race Series. More information can be found at www.vorra.net