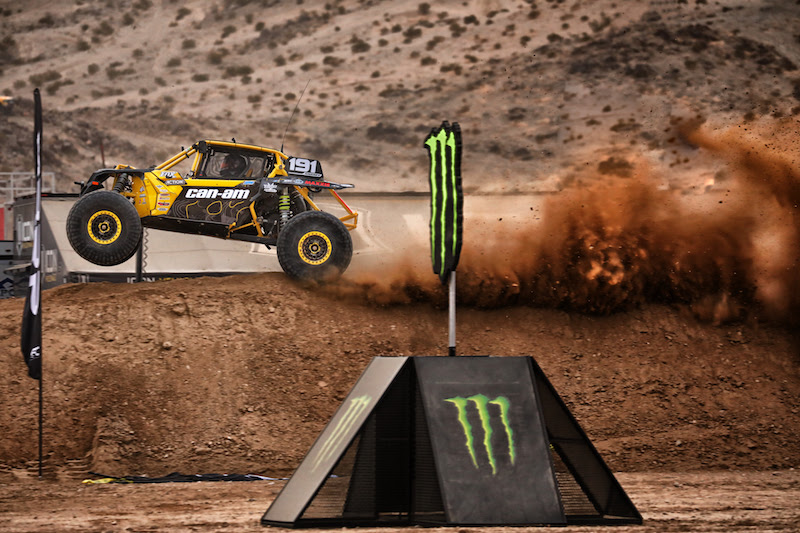 February 5, 2021 (Hammertown, CA) – There is no denying that the volume of UTVs are taking over the desert. The Can-Am UTV King of the Hammers Presented by Progressive proves that with 113 cars taking the start. However, King of the Hammers is known as the most brutal one-day race for a reason. 46 vehicles finished.

Can-Am swept the podium with Kyle Chaney, Cody Miller, and Phil Blurton finishing one, two, and three.  Chaney has been on a roll, winning $10,000 earlier in the week at the Toyo Desert Challenge and now earing $25,000 by winning the UTV King of the Hammers. Last year Chaney was on a different kind of roll, dislocating his toes and breaking his foot when his UTV rolled on him.  Despite that adversity, he still managed to finish second in 2020, giving the competition a glimpse of what sort of resolve they should expect from the Ohio-based racer.  ‘I wanted to make it through the desert loop” Chaney confessed. “It had a bunch of nasty chop in it and I knew making it through that part of the course was going to be key today. I knew I could get through the rocks. But the desert was going to be tough. I knew we could bring it home.” Chaney completed the 121-mile course in just three hours and 47 minutes. The course started with a desert lap that combined tight, twisty ridgelines with mixed high-speed lakebeds.  From there the difficulty level ratcheted up as the competitors had to traverse brutal rockcrawling trails including Jackhammer and Bender Alley; trails that challenged both team and machine.

Cody Miller, 2020’s fast qualifier and brother of last year’s winner UTV winner Hunter Miller, came in second place, finishing just under 12 minutes behind Chaney. “I was headed up Jackhammer and I saw Kyle coming down and I knew at that point that he had a very serious lead,” Miller revealed at the finish line. “we pushed really hard but couldn’t catch him.” The Millers are relatively new to rockcrawling and King of the Hammers, but have taken to the rocks like ducks to water. The two Texans have a long history racing for Can-Am, winning championships in GNCC and WORCS in the past.  “King of the Hammers is just a great team event,” Miller explained. “You know, a lot of the races that we run are just the driver versus the driver. Out here it’s the team versus the team. All the way from the pits to the passenger seat. It’s a major group effort. And it just brings everyone together and it’s such a good family environment.” 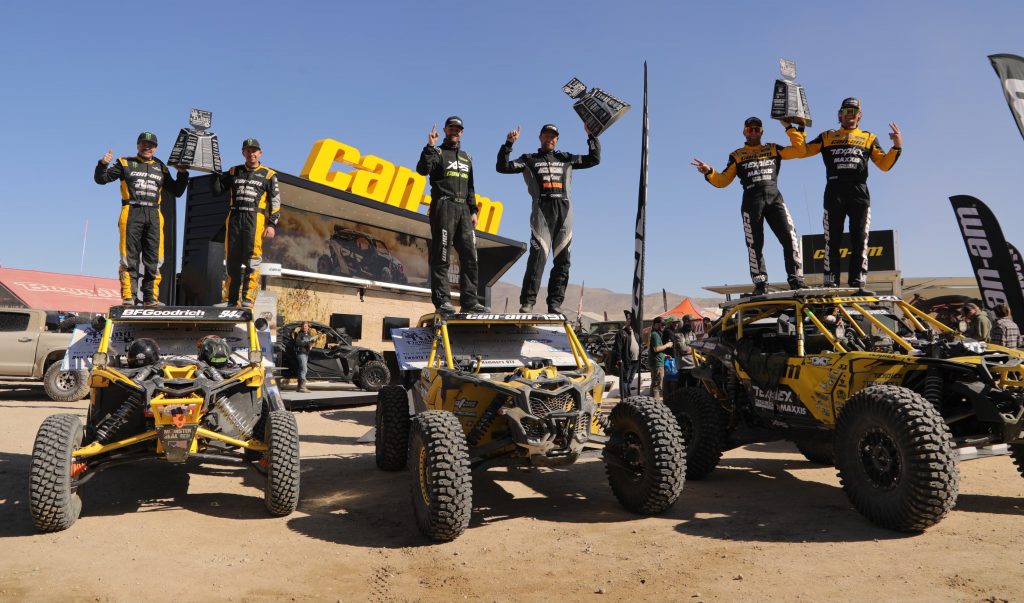 2021 Podium Sweep at King of the Hammers

Phil Blurton rounded out the podium, a follow up on his third-place finish from last year and his second-place finish at the Toyo Desert Challenge B2 vs B3 Grudge Match this past Saturday. “There’s nothing like it,” Blurton answered when asked about King of the Hammers. “You know, about every two weeks we’re racing somewhere different and this race is just so unique. You’re in the desert doing 100miles an hour and then you’re in the rocks doing three miles an hour and next thing you know you’re stuck on the rocks and out of the car winching. It is a combination of everything.” Blurton finished 19 minutes back from Chaney, losing valuable time when he got a flat tire and discovered that his jack had flown off the car. “We had to pull up on a rock to get the tire off the ground and get it swapped out.”

Finishing just off the podium was second generation racer Ronnie Anderson with his big brother RJ navigating.  The brothers made it to the very last turn of the race when they caught a rut and barrel rolled their UTV multiple times.  Fortunately, the two were unharmed, and still managed to cross the finish line under their own power.

The UTV King of the Hammers race has arguably the deepest talent pool in a week of events full of talented racers.  In addition to dedicated UTV racers such as Kyle Chaney and the Miller brothers, 4400 stars Loren Healy and Shannon Campbell mixed it up with desert racer Cameron Steele, motocross legend Jeremy McGrath, and short course racers CJ and Johnny Greeves.  To challenge this talented roster, Ultra4 Race Director JT Taylor had the UTVs run the same first two laps as Saturday’s main event, the OPTIMA Batteries King of the Hammers Powered (which runs an additional lap through the most challenging rock canyons).

Despite the difficulty, in 2021, 46 of 109 UTVs finished the race within the ten-hour time limit.  By contrast, in 2013 there were only 35 total entries, and only three of those reached the checked flag. This year, Chaney and the Miller brothers have entered the 4400 race on Saturday, driving the same Can-Am Maverick X3s they raced in the UTV race. “We will tear the whole thing apart tonight and have it back together by the morning,” Chaney disclosed.  The action continues on Friday, February 5th with the 4WP Every Man Challenge before the grand finale on Saturday, February 6th with the unlimited OPTIMA Batteries King of the Hammers Presented by Lasernut. Not on the lakebed?  The best live coverage in off-road racing starts at 8 AM Pacific each morning at ultra4racing.com/live.